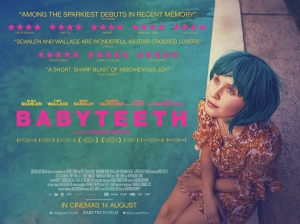 BASICALLY…: A seriously ill teenager (Scanlen) falls in love with a drug dealer (Wallace), much to the concern of her parents (Davis and Mendelsohn)…

Although the sick teen romance movie sub-genre is starting to die out, more than five years since The Fault In Our Stars kicked off that trend (and even longer since the likes of Love Story, Now Is Good and A Walk To Remember planted the seeds for it), some entries still manage to find some interesting ways to surprise even the more cynical audiences members. Babyteeth, one such new film of that sub-genre from debut filmmaker Shannon Murphy, takes a few unexpected detours as it deals with the usual themes such as grief, love and rebellion, ultimately ending up where you expect it to but not without a serious gut-punch that’s much harder of a blow than it normally is.

Murphy’s film is about Milla (Eliza Scanlen), a 16-year-old cancer patient who’s going through the motions of her illness, until she meets and develops an instant spark with 23-year-old hustler Moses (Toby Wallace). He’s a bit dodgy right off the bat, with his face etched with tattoos as well as the fact that he’s clearly tweaked on something, but Milla starts to fall hard for him regardless, like any teenage school girl would normally do. However, Moses’ questionable nature isn’t lost on Milla’s parents, psychologist Henry (Ben Mendelsohn) and former music teacher Anna (Essie Davis), who almost immediately don’t want him around their sick daughter, but when they start to see the positive effect he’s having on her they decide to keep having him around, so that Milla can spend however much longer she has left to live in the most positive mood possible.

It takes a familiar-ish story about a cancer-ridden teen falling hopelessly in love, and gives it its own quirky and mature style, from multiple chapter titles to artsy Terrence Malick-esque shots that take full advantage of the sunny Australian cinematography. It does take a short while for you to become accustomed to Murphy’s brand of storytelling, but soon enough you’re invested enough in both the story and these characters that you don’t mind that every now and then it goes a little far out-there in some of its visuals (an equally hypnotic and awkward encounter at a party Milla attends is fascinatingly bizarre). Murphy also manages to balance out the film’s tone evenly so that some of the more comedic elements – such as Mendelsohn’s Henry going over to fix a light bulb for his slightly dim pregnant neighbour (Emily Barclay) – don’t overlap into moments where the film takes a much more serious turn, particularly when dealing with the physical and emotional fallouts of Milla’s illness. Like most movies of this type, it addresses how much it sucks to have an illness on this level, but it is more interested in Milla’s personal struggle to have a normal teenage life, including having a boyfriend, preparing for an upcoming school formal, and talking to other students at her all-girls school (in one quietly humiliating scene, Milla stands by as another student tries on her wig to see what she looks like with extensions). Of the more recent films about sick teens falling in love, this is definitely one of the more unique and most profound ones, because not once does it feel like it’s pandering to a teen crowd, nor does it go too far over-the-top with its emotions like some of its more tear-jerking predecessors.

A lot of what makes it work is the chemistry between all the characters; every single person, be they one of the leads or mere supporting players, has a natural repertoire with one another, which makes each and every one of their conversations feel a lot more natural and more heartfelt. Right away, you can spot the numerous sparks flying between Eliza Scanlen and Toby Wallace as Milla and Moses respectively, as well as the still-present connection between Essie Davis and Ben Mendelsohn who still clearly care about each other despite their overwhelming grief. The actors are all excellent here, particularly Scanlen who – after breaking hearts as Beth in Greta Gerwig’s take on Little Women – brings such vibrant joy and sweetness to her character, and Davis who continues to be one of our most understated performers as the emotional mother who’s on more pills than her sick daughter. Their sparky turns make the film feel more vibrant and certainly a lot more emotional, especially as things come to a head in the tough-to-bear climax, which is where the film delivers its biggest gut-punch that’s both devastating but also somewhat satisfying.

It’s a formidable debut from a filmmaker who has taken a familiar concept and somehow made it feel as fresh and emotional as it was the first time many of us saw it in a movie, with plenty of laughs, tears, and love to go around. It probably won’t immediately appeal to those more comfortable with safer fare like The Fault In Our Stars or A Walk To Remember, but it is a lot more mature, far less condescending, and much more eager to try new things than a lot of the worse examples of this kind of film. Filled with great performances, a stunning visual style, and some truly hard-to-stomach emotional scenes, Babyteeth is a solid recommendation for anyone who’s eager for something a little different to cry over, and definitely for anyone who wants to feel respected while they’re having their emotions played around with.

Babyteeth is an emotional and well-balanced drama that takes familiar themes and tropes from certain other sick-teen romance movies and makes something fresh and mature out of it, with director Shannon Murphy marking an exceptional debut with a stylish and tonally-balanced approach, and a fantastic ensemble delivering some excellent performances and sharing great chemistry with one another, all while leaving you both emotionally gut-punched and also somewhat uplifted by the devastating final few scenes.

Want to decide what the movie’s like for yourself?
Check out Babyteeth showtimes in London
via