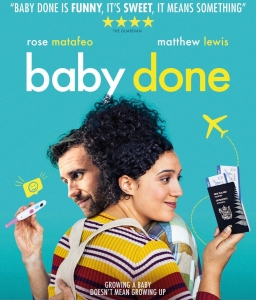 New Zealand is the envy of the world right now, as it has clocked in almost zero new COVID-19 deaths or infections over the past few months, meaning that life for them has practically returned to normal whilst the rest of us are still struggling to contain new variants and rising infection rates. Although that’s more down to competent leadership and airtight travel restrictions than anything, New Zealand’s appeal to other countries also extends to its booming film industry, from hosting high-profile productions including James Cameron’s back-to-back Avatar sequels, to its distribution of local light-hearted comedies like Baby Done which seek to put a much-needed smile on the faces of housebound audiences.

However, while Curtis Vowell’s film – executive produced by Oscar-winner Taika Waititi – certainly has its heart in the right place, and succeeds in getting a few awkward guffaws out of the viewer, its surface-level attitude towards its subject matter and a lead character who’s hard to sympathise with both contribute to a rocky reaction that’s equal parts amusing and frustrating.

In the film, Zoe (Rose Matafeo) and Ian (Matthew Lewis) are a young and adventurous couple living in Auckland, working as arborists while also struggling to define their relationship, with his repeated marriage proposals half-jokingly being turned down. However, during a medical examination, Zoe discovers that she’s pregnant, but while Ian is ecstatic about the idea of becoming a parent, she’s far less keen to adopt her new parental responsibilities, and instead sets out to accomplish a number of things before she eventually gives birth. Among them is taking part in a tree-climbing competition in Canada, but her condition soon makes it hard for her to realistically travel overseas, and puts the couple at odds over their very different ideas of maturity and parenthood.

On the one hand, it’s refreshing to see a pregnancy comedy where the tables are turned and it’s the mother who’s the irresponsible party; so many of these types of movies have to deal with the father being the one who has to grow up and take charge of their life, but here it’s a welcome change of pace as Zoe constantly refuses to act accordingly, even with her ever-expanding uterus beginning to get in the way of things she enjoys like climbing trees or crawling under locked toilet cubicles. However, that does lead into the fact that the biggest hurdle this film struggles to jump over is the way in which this character is written, and how her lack of personal responsibilities make it very difficult to understand her point of view. Zoe is a rather selfish character, and the things she does throughout this movie constantly jeopardise her relationships with friends, family and even the father of her child, all because she is unwilling to accept that her life is no more important as the baby she’s carrying, as well as the flimsy belief that one somebody becomes a parent, they become a shell of who they once were. Her behaviour eventually reached a point where I simply stopped caring about her, which I recognise is part of her overall character arc, and female characters like this have worked in better-written material like Fleabag, but here there’s a limit as to how much someone like her can get away with before they become too insufferable, and I found myself empathising far more with Matthew Lewis’ Ian character more than I did with her, which to me feels like a script error since we don’t get that much insight into her own psyche to better understand why she is thinking this way.

The film could have really benefited from a slightly deeper look at these characters, perhaps with more scenes that show them before they discover they’re expecting, but since it just kind of jumps into things and from thereon doesn’t fully explore what kind of relationship they have with each other, it’s hard to latch onto what their characters are all about, and if we are interested enough in them to learn more. It’s one of those movies that looks at pregnancy and the prospects of parenthood as basic surface-level issues, without really going deeper than it feels it need to, which again can make things tricky when you want the film to get more into these themes than it currently is, and might leave some viewers a little disappointed that it isn’t more than it could have been.

Baby Done is an okay but slightly forgettable pregnancy comedy that struggles to overcome its surface-level themes of parenthood, and a lead character who can often be too selfish to fully sympathise with.

Baby Done is out now on digital platforms.