It’s a big day tomorrow for Awards Feeder, with the 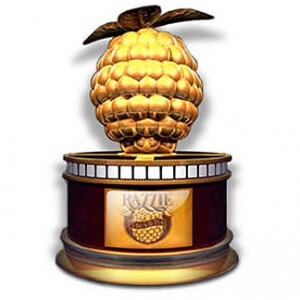 But before then, it’s time to face the absolute worst of the worst with the newly-arrived Golden Raspberry nominations, shortlisting some of the most horrible films of 2013.

The spoof ceremony, founded in 1980 by publicist John Wilson and now in its 34th year, has given the universally-despised Grown Ups 2, starring Adam Sandler and his friends, the lion’s share of nominations this time round, “earning” 8 nominations including Worst Picture, Worst Actor (Sandler), Worst Supporting Actor and Actress (Taylor Lautner and Salma Hayek, respectively), Worst Screenplay, Worst Director, Worst Screen Combo (for the entire cast) and Worst Remake, Rip-Off or Sequel.

The Razzies are no stranger to “rewarding” Sandler and his line of work from production company Happy Madison. Most notably, at 2012’s ceremony, Sandler’s infamously terrible Jack and Jill swept the board, winning each and every single award given out at the ceremony, a first in Razzie history. Last year, Sandler received the Worst Actor award for That’s My Boy, which also won the Worst Screenplay prize. Now, with Grown Ups 2‘s multiple nominations, it seems Sandler is back in the torture cage once more.

But he has stiff competition this year. Also shortlisted for Worst Picture are the woeful Shyamalan/Smith sci-fi After Earth (M. Night Shyamalan and Smiths Will and Jaden were all nominated in individual categories); the misguided Johnny Depp western The Lone Ranger (Depp earned a nomination for Worst Actor, though co-star and Lone Ranger of the title Armie Hammer got off lightly); Tyler Perry’s latest “comedy” featuring popular character Madea known as A Madea Christmas (Perry was amusingly nominated for Worst Actress for the cross-gender role); and the starry series of sketches Movie 43 (which renowned film critic Richard Roeper declared to be “the Citizen Kane of awful”, so it HAS to be pretty bad).

Among the notable actors who received nominations for their appalling work over the past year included Ashton Kutcher for Steve Jobs biopic Jobs; Naomi Watts whose Worst Actress nomination includes her awful appearances in Diana and Movie 43 (oddly enough, out of its huge A-list ensemble only Watts and Halle Berry received specific nominations for their work in the film); and Sylvester Stallone, who earns his record 31st nomination for Worst Actor for his three films in 2013 (Bullet to the Head, Escape Plan and Grudge Match).

As is tradition, the Razzies award ceremony is held the night before the Oscars, in this case March 1st 2014.

Also of interest: the foundation has unveiled its campaign on Indiegogo to raise funds for a televised show in 2015. If you are generous enough to contribute, and earn some cool perks as well, then click here to be taken to their campaign and donate however much you want (or not).

A full list of the 34th Annual Golden Raspberry nominations can be read below:

Tomorrow, the Academy Awards finally unveil their nominations! Stay tuned to see who is in with a chance to take home Oscar gold…