Awake (Review) – Not Exactly Worth Staying Up For 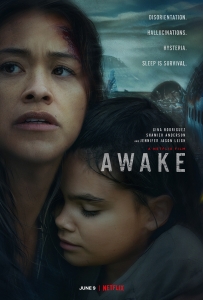 BASICALLY…: A mysterious phenomenon takes away people’s ability to sleep, but a potential solution is discovered by a former soldier (Rodriguez)…

The same year that A Quiet Place came out, Netflix released their own sci-fi thriller about a mysterious phenomenon that revolves around the removal of a basic human sense, in the form of the wildly inferior Bird Box. Now, as it so happens, the same year – nay, the same month – that A Quiet Place Part 2 comes out, Netflix also has yet another eerily similar premise to go right out of the gate with Awake. And guess what? It also comes up wildly short in comparison to John Krasinski’s much more suspenseful and terrifying blockbuster sequel.

Director and co-writer Mark Raso’s film, however, does have an interesting enough premise to work off of, and it has actors who do well to act completely manic when the time calls for it. Unfortunately, almost all of it originates from a script that doesn’t dive deep enough into its main ideas, and comes out with little to say about humanity that other similar movies haven’t already said.

The film begins as security guard and occasional drug dealer Jill (Gina Rodriguez) comes off the night shift, getting a bit of shut-eye before she picks up her kids from their grandmother (Frances Fisher). As it turns out, it’s the last bit of sleep she or anyone else will get: all of a sudden, a global event completely wipes out any piece of technology, and along with it people’s ability to sleep. Very quickly – and it really is quick – everything goes to pot as people start to lose their minds due to sleep deprivation, with even Jill starting to feel the psychological side-effects of staying up for hours on end. The only person that seems to be able to sleep completely fine is Jill’s young daughter Matilda (Ariana Greenblatt), and so Jill and her kids, including teenage son Noah (Lucius Hoyos), must race against time to reach a military hub and possibly find a cure, before people begin to die from lack of sleep or, even worse, succumb to their overwhelming psychosis.

There are moments in this movie where you can genuinely feel that, with a much more developed script, it could have worked. The central idea, about people going crazy because they can’t sleep, is pretty chilling, and does make for some intense scenes that make it seem like a more post-apocalyptic version of The Crazies. A certain menace lurks within scenes of people who we know enough about by that point start to show signs of their reality slipping, which can be intimidating when you see how far, and how quickly, their inhibitions and morality slips away; a seemingly kindly preacher (played by Barry Pepper, who seems to be doing his best Johnny Depp impersonation here) starts having homicidal thoughts while still trying to keep the peace, while Jennifer Jason Leigh’s doctor character ends up becoming akin to a mad scientist by the end. Also, there are other characters who are first introduced in this movie as though they’re going to be prominent leads, but are then suddenly shot in the back of the head by manic cops, leaving you unsure if anyone – even the central protagonist – is going to survive to the end of this movie. It’s moments like these where you can tell that there is something within Awake that really could have stood fine enough on its own, which does make it more respectful than something like Bird Box which through and through felt like it was cynically trying to ape the style and suspense of A Quiet Place.

Unfortunately, the script tends to gloss over a lot of pertinent information that could have been used to make viewers actually care about who it’s all happening to, or to at least make much of what happens seem plausible. We barely know Gina Rodriguez or her kids before everything starts going downhill, as with many other secondary characters who tend to weave in and out with little defining feature; each one of them falls victim to the pacing in this movie, which really goes by so fast that it doesn’t seem believable that only a day or two after the phenomenon begins, people are already starting to talk about sacrificing children and forming bloodthirsty sects of manic camp dwellers. It comes across as a rather large overreaction than anything, especially when – again – technology and the inability to sleep hasn’t even been around for a full week by this point. There isn’t much else that this script has to say about how terrible and insane people can get in the wake of a worldwide disaster, feeling more like retrodden ground than anything genuinely fresh and exciting.

More needed to have been done to this script so that Awake may actually make good use of its central premise, and there are parts where you can see the better movie shining through. Instead, it’s a forgettable reminder to just go out and watch A Quiet Place Part 2 instead.

Awake doesn’t make much use out of its interesting premise with a script that feels half-thought out and nowhere near as intimidating or terrifying as other films like it, despite occasional glimmers of the decent and more developed movie that could have been.

Awake is now available on Netflix.