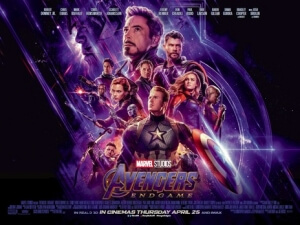 BASICALLY…: After Thanos (Brolin) wipes out half the universe, the Avengers reunite to put things right…

PLEASE NOTE: This review contains ZERO plot spoilers outside of what is already public knowledge, but if you want to go in with as fresh eyes as possible then stop reading and come back after seeing it – additionally, a second review with HEAVY SPOILERS will be published within the next seven days, which will go much more into detail about the events that happen in this movie. With that said, here are my SPOILER-FREE thoughts on the film…

11 years. 22 movies. 10 franchises. 3 complete trilogies. And more fully fleshed-out characters than your average soap opera. All of it has been leading to this one moment in cinematic history, the culmination of a completely unprecedented and heavily ambitious film saga that puts all the others, whether it’s James Bond or Harry Potter or even Star Wars, to shame.

Over the years, and across several storylines and even beyond the cosmos, we have become so attached to these characters and this ever-expansive universe that to see it finally reach its crescendo is heartbreaking, knowing that this is very likely the last time anything of this magnitude could, or even should, ever happen again. The countless writers and directors attached to these projects have made damn sure that we not only get to know these characters as well as we know our closest friends, but also get to laugh when they laugh, cry when they cry, cheer when they cheer, and so on; it’s now reached a point where we are reluctant to detach them from our lives, as they really have become like a family to us all, from critics to audiences to the biggest die-hard Marvel fanatic.

Yet, as Robert Downey Jr.’s Tony Stark observes in the first teaser for Avengers: Endgame, “part of the journey is the end.” And let me tell you, as far as the end of this particular journey goes, it could not have been a more perfect way to conclude everything prior to it. This is truly epic cinema right here, regardless of whether or not you’re up to date with all the Marvel Cinematic Universe entries so far (though it certainly helps to have seen at least a dozen or so of them before this one), with grand set-pieces, emotional character arcs, and dazzling visuals that would give Cecile B. DeMille a screaming orgasm. It is not just a near-perfect climax to a near-perfect cinematic universe; it is also goddamn indestructible as a movie on its own merits.

Given that this is a spoiler-free review, I will do my best to keep as much of this plot as vague as possible, using only details that have already been made public knowledge by the film’s marketing (which, by the way, has done an excellent job at hiding nearly everything that isn’t in the first twenty or so minutes). It follows almost directly from the events of Avengers: Infinity War, which saw the big Purple People Beater himself Thanos (Josh Brolin) acquire all six Infinity Stones and wipe out half the universe with a snap of his fingers. The surviving heroes, from Stark to Steve Rogers/Captain America (Chris Evans) to Thor (Chris Hemsworth) and others, all band together to come up with a plan to undo everything and stop Thanos once and for all… and honestly, I’m going to stop right there. You’ll have to wait until the spoiler-heavy review to find out what happens – or better yet, just go and see the damn movie and find out for yourself.

There is so much stuff to talk about with this film that I honestly don’t know if I’ll have enough room to talk about it in the spoiler-heavy review, let alone in this one which has zero spoilers. What you absolutely need to know, however, is that everything you had hoped this movie would be is indeed what it is, and then some; it is action-packed, it is funny, it is even sad in parts, but most of all it is a completely epic experience that will take you places you never imagined you would go in this series, and make you feel emotions you never even knew you had. Infinity War had a very operatic feel to it, from its stark imagery (no pun intended) and bleak climax that, once again, saw characters we had come to know and love over the years simply evaporate into dust, as well as an incredibly complex and fully fleshed-out villain in Thanos; Endgame is a very different beast, with entire sections devoted to the fallout from that disturbing finger-snap, a lot more comedic set-pieces (one of the few complaints about Infinity War was its noticeably decreased sense of humour, at least compared to some of the other films), and long stretches of character explorations that make full use of its 3+ hour running time, but the pure drama and expansive scale of it all basically makes it the “Nessun Dorma” of superhero movies, an aria of sheer beauty and emotion that totally eclipses all other arias prior to it.

From a storytelling perspective, it’s a miracle that it works at all with its intricate plotting and numerous characters that all have their own unique perspective on events, and I don’t think enough credit goes to writers Christopher Markus and Stephen McFeely for a script that must have taken them half their lives to map out and piece together, ensuring that every last detail is used accordingly and serves its own unique purpose. They honestly deserve as much praise and attention as Marvel Studios head honcho Kevin Feige, or directors Anthony and Joe Russo, or even the numerous actors delivering some of their very best work not just in this franchise but their entire careers; I won’t say which of these actors stand out in case it alludes to anything spoilerific, but you’ll know which ones they are when you see them, and honestly, even though there’s probably no chance in hell it’ll happen at all, some of them deserve serious awards consideration at the end of the year (although, if Black Panther can break barriers and score a Best Picture nomination, then I suppose it’s no longer a pipe dream to see a movie on this scale get as much love as Lord of the Rings: Return of the King did that one year).

It’s already an incredible accomplishment to have several movies and franchises collide together for one massive epic event such as this, but to have it be this great – and I mean, THIS great – outdoes any of that; in the wrong hands, all of this could have so easily been done wrong, or with not as much care, but through a combination of charismatic actors, talented writers and directors, state-of-the-art effects teams, and endless source material to work off of, this series has surpassed all of our expectations time and time again, and what it’s all been building towards is the greatest pay-off you could ever imagine. Some will call this movie nothing more than sheer fan-service, or a self-indulgent celebration of itself, but Avengers: Endgame keeps its eyes on the prize at all times, delivering the conclusion we’ve all been waiting for with barely any slip-ups along the way, and being damned amazing at it.

If part of the journey is the end, then Marvel has definitely saved the best for last.

Avengers: Endgame is an incredibly realised culmination of the Marvel Cinematic Universe to date, which not only concludes several storylines and character arcs in the most satisfying ways possible, but it a truly epic piece of cinema if ever there was one.

Check out Avengers: Endgame showtimes in London
on Walloh.