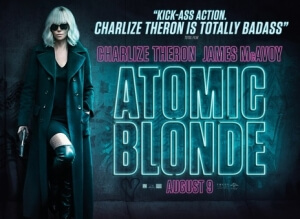 BASICALLY…: In 1989 Berlin, MI6 operative Lorraine Broughton (Theron) is brought in to recover a stolen list of undercover spies, including that of a double-agent…

It’s kind of fascinating how Charlize Theron has evolved over the years from obscure actress to Academy Award-winning A-lister to now a major go-to action star, one who no matter what film she’s in always seems to do an awesome job of both kicking ass and acting like she’s really into it.

She combines both of these once again for Atomic Blonde, a neon-drenched action-thriller that is big on action, but not quite as big on thriller. Either way, it’s a wholly decent bit of fun.

Theron is MI6 agent Lorraine Broughton, who in 1989 – just days before the collapse of the Berlin Wall – is tasked with heading to Berlin and tracking down a stolen list of known operatives working in the field, including that of  a KGB double-agent known as “Satchel”. In terms of plot points worth giving a monkey’s about, that’s about all the information you really need – everything else is not worth getting invested in quite honestly, as it’s either too convoluted or just very pedestrian to even execute spectacularly; it’s basically an amalgamation of several types of spy movies you’ve seen before, only with an Eighties aesthetic and slightly more tongue-in-cheek awareness of itself.

However, said aesthetic and its highly impressive fight choreography – as well as a committed turn by Theron herself – is what really carries this movie on its shoulders. Director David Leitch, previously uncredited as co-director on John Wick and is currently in production on Deadpool 2, is a former stuntman and stunt coordinator on several Hollywood films like 300, Fight Club and V for Vendetta, so he has more than a little understanding of how to choreograph and stage an on-screen fight scene to an amazingly effective level, something that he and fellow former stuntman Chad Stahelski used to make John Wick and that Leitch now brings to Atomic Blonde. Each punch, kick, stab, gunshot and scream is like a ballet recital, and a beautifully coordinated one at that, with the smooth camerawork allowing you to see and appreciate each move without making it hard to watch (this is honestly how the troublesome shaky-cam technique SHOULD be done), and the refusal to shy away from how gory some of these one-on-one fist fights can truly get. There’s an outstanding sequence that appears to be done in one continuous take, accomplished by some slick editing and some neat handheld camerawork, which especially feels brutal in an amazing way; as well as killing a whole bunch of goons, Theron herself gets pretty bloodied up and bruised like a peach, yet musters all of her strength to just kill every last bad guy she can identify, and it seriously leaves you breathless. While this movie may have its fair share of problems, such as a storyline that’s not really getting invested in outside of the very basics, the action is most certainly not one of them, and makes you very excited for what Leitch might bring to Deadpool 2 if this is how he fares as a solo action director.

I also like how this is a Cold War spy movie that is literally happening right before a definitive end to that era of history; this is 1989 Berlin, and the Wall is just barely staying up amidst mass protests and a growing pressure on East Berlin to finally tear it down. The film makes it very clear in its opening that this isn’t a story about that specifically, but the historical context of it still reigns supreme in the background, and adds a fine hidden layer to how the spy game is being played out at a major turning point in 20th century history. Its late-80s setting is also a good excuse to drench the film in enough neon to light a disco club, and a soundtrack that includes a lot of synth-pop and European chart toppers, which gives it a beautifully retro skin to walk around in, and what gorgeous skin it is (that was meant to sound a lot less creepy, by the way).

Theron, like I said, has come a long way from being an Oscar-winning star to a major action heroine, and while this isn’t necessarily her best role in this genre (it’ll take a lot to overshadow Imperator Furiosa), she still gives it all she’s got with her stone-cold charisma and high ability to beat up as many people as she can almost effortlessly. Even though there are parts of her character that don’t always ring true, including a few last-minute surprises that don’t really make a whole lot of sense when you think about them, she is always watchable and makes the most out of this fun but flawed character; the exact same can be said for James McAvoy, who co-stars as a fellow operative whose intentions may not be entirely sound.

While it is filled with great action, an enjoyable lead performance, and a fun 80s aesthetic, Atomic Blonde is ultimately just decent enough to pass the time, since the lack of a compelling plot really does drag the movie down at times, especially when it calls for you to care about certain new developments but since it’s not developed as strongly you just don’t give a crap. Mostly, you are sitting there waiting for the next action scene to come about, and when it does it’s great, but you have to sit through a lot of standard spy stuff that’s only made more memorable here because of the style this movie has adopted. It’s a style over substance movie, but at least one of those is good enough to make you feel glad that you saw it.

Atomic Blonde is an entertaining display of stunning fight choreography, an enjoyable late-80s aesthetic with a strong sense of historical context, and a fun lead action heroine in Charlize Theron, but the lack of a truly compelling story – made up of a lot of other standard spy movies all rolled into one – and certain plot points and character revelations that don’t seem to make a lot of sense, drag it down from being truly great to just being a wholly decent action romp.