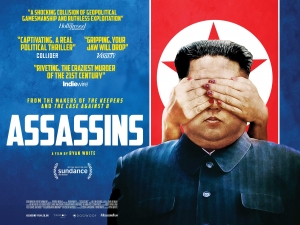 BASICALLY…: Two women are convicted of the assassination of Kim Jong-un’s half-brother, but the trial shows they may be victims of a much larger scheme…

Political assassinations don’t get any more bizarre than that of Kim Jong-nam. The first-born son of former North Korean dictator Kim Jong-il, and half-brother to the current leader Kim Jong-un, was killed at a Malaysian airport in February 2017 by a highly toxic nerve agent, supplied by two apparent female assassins who were later arrested and put on trial in the country.

As it turned out, though, it wasn’t quite the open-and-shut case some people had assumed. The women – Indonesian Siti Aisyah, and Vietnamese Doan Thi Huong – were eventually revealed to not be sociopathic masterminds of this major killing, but mere pawns of a far greater conspiracy that got weirder and weirder the further down this rabbit hole we fell.

These women, and both the lead-up and aftermath of their involvement, is the focus of director Ryan White’s compelling new documentary which, although named Assassins, is more sympathetic than slanderous to these suspected killers.

The camera crew covers the efforts of Aisyah and Huong’s legal teams as they put together evidence that, instead of the assassins they were initially portrayed as, they were actually being convinced that they were participating in an online prank show, and were under the impression that they were simply committing a harmless practical joke against the man they didn’t even know was Kim Jong-nam. Through interviews with journalists, family members, and even mysterious figures who first approached the woman about their involvement in the fictional prank show, we learn that the women were reasonably good – one worked long hours at an Indonesian sweatshop before moving to the more progressive capital city of Jakarta where she would briefly find work as a sex worker, while the other had aspirations of making it big as an actress and was thus intrigued by the idea of starring in a comedic prank show – and were being misdirected by North Koreans posing as producers and directors. There is also a great focus on Kim Jong-nam himself, and his tumultuous relationship with his half-brother Kim Jong-un, who was keen to assert his ruthlessness no matter what, even if it meant (presumably) ordering the death of his own family.

At the core of this whole saga is a rather sinister story about a totalitarian regime basically throwing these two innocent women under the bus to cover their own tracks, all so that they can literally get away with murder. What White is able to convey with his film is not necessarily a game-changing collection of facts surrounding the case itself – most of the details, if not all of them, are based on things which are already public knowledge – but a stark reminder of how the power of authoritarians, if left unchecked, can lead to dire consequences for those who openly oppose them. It’s a practise we are currently seeing right now as of writing, with Russian opposition leader (and outspoken critic of Vladimir Putin) Alexei Navalny being detained by the state after returning following a months-long recovery from an attempted nerve agent poisoning, not unlike the fatal one carried out on Kim Jong-nam, who was often very open about his disdain for third-generation dynasties within North Korean leadership. This current news topic, combined with the shocking and often disturbing manipulation tools put on display in this film, further drives home the important themes of political ruthlessness, and also the devastating emotional turmoil placed upon the two women who unjustly faced the ramifications of other people’s crimes.

Assassins places an enormous amount of sympathy upon both Aisyah and Huong, as we see and hear via audio recordings and archived posts on social media just how vulnerable they were to be taken advantage of so easily by these external forces. Other parts of the film show their lawyers show remarkable dedication to proving their clients’ innocence, while some of the reporters are restless in showing the bare facts that the prosecution won’t even care to learn more about, all united by the common belief that the women are most certainly not to blame for the murder. As dreary and unsavoury as the circumstances are, there is also a bittersweet tone to this storytelling, with the tragic nature of the women’s involvement in the crime leading to a somewhat hopeful pursuit for the truth which, after hearing one horrific detail after another about this dastardly plot, feels like a sweet relief.

It’s a compelling real-life tale of political power at its most barbaric, told compellingly by filmmakers who set out to deliver whatever facts they can in an orderly and informative fashion. Assassins will certainly leave you more fearful of the powers out there in the world who, as a result of their effectively getting off scot-free, feel way more invincible and dangerous than ever before, but also relieved at how, in the very best of cases, democracy eventually prevails and the truth, as they say, will out. If you’re looking for a fascinating story told in an equally fascinating manner, then this might be the documentary you never knew you wanted to watch.

Assassins is a compelling account of the real-life assassination of Kim Jong-nam, the half-brother of North Korean dictator Kim Jong-un, and the unpredictable revelations surrounding the two accused women which unfold in wildly unexpected and gripping manners, ultimately revealing a sinister story of unchecked political power, but also a somewhat hopeful legal drama about these innocent pawns who, despite being charged with a heinous crime, ultimately exposed a far greater conspiracy at play in the background.

Assassins is out now to rent or buy on digital platforms, including Amazon Prime Video.