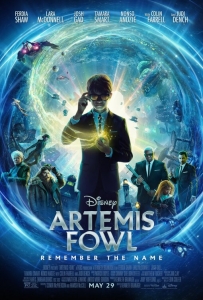 BASICALLY…: A young criminal mastermind (Shaw) finds himself brought into a conflict with a secret society of fairies…

The list of franchise non-starters based on popular young-adult material is seemingly endless, with numerous missteps like Mortal Engines, The 5th Wave, Eragon, The Golden Compass, Vampire Academy and The Darkest Minds all failing to grasp not just what made other properties like Harry Potter and The Hunger Games far more successful, but also the stories and characters within their own properties that gained them enough of a fanbase to ensure a movie adaptation in the first place.

Artemis Fowl, based on the popular book series by Eoin Colfer, isn’t just a mere new addition to that list. It plops right into that special rare category of “colossally awful adaptation that barely gets the fundamentals of movie storytelling right”, alongside The Last Airbender. That’s right: I am suggesting that this $125 million trainwreck is on par with M. Night Shyamalan’s infamously woeful cartoon adaptation, based on its complete lack of efficient storytelling and world-building alone – and just like The Last Airbender, it is also a complete embarrassment for anyone involved in it.

Told via a framing device of Josh Gad’s “giant dwarf” Mulch Diggums being interrogated by unseen authorities, we learn that twelve-year-old Artemis Fowl (debuting young actor Ferdia Shaw) is the highly intelligent son of Artemis Sr. (Colin Farrell), a wealthy businessman and alluded criminal mastermind. However, when his father is suddenly kidnapped, Artemis learns that he must trade a MacGuffin called the Aculos with the kidnapper to save his life – what the Aculos does, nobody knows, and certainly not the audience by the end of it because despite this movie being entirely made up of exposition dialogue, it is never made entirely clear what it does. Either way, this leads to Artemis discovering the existence of a fairy colony at the centre of the Earth, where the winged creatures have formed their own police force overseen by Commander Root (Judi Dench, who between this movie and Cats is not having much luck picking her share of CG-ridden blockbusters), and have sent one of their own troopers Holly Short (Lara McDonnell) to investigate the disappearance of the Aculos from their clutches.

Full disclosure: I have not read any entry of the book series on which this is based, but somehow I don’t feel like I have to had read them to know that this movie does a complete disservice to the original source material. As I said earlier, the whole movie is told in extremely stilted and matter-of-fact exposition dialogue, where it is mostly told and rarely shown to us the ins and outs of this world they’re setting up, and the motivations of the characters which Josh Gad handily spells out for us in his gruff narration, as though we were too stupid to pick up on those sorts of things for ourselves. Then again, it’s probably a good thing that Josh Gad is telling us more about these people, because not only does the script never let you get to know anyone here, but most of the performances are so wooden that you can barely pick up on any emotion they may be conveying; Ferdia Shaw, sad to say, gives such an astoundingly flat performance that you’d almost be mistaken for thinking it’s actually a child robot from the world of A.I. Artificial Intelligence playing the part, but the character is so poorly defined and given absolutely zero room to seem anything remotely human that you also don’t care about this blank figure regardless of his performance. The only actors who actually seem to care about what they’re doing are Lara McDonnell who exhibits some charm as a character who’s infinitely more interesting than the title character, and Josh Gad who does sneak in a couple of funny lines every now and then; everyone else is flat, dull and completely lost in this mess of a production.

It’s hard to tell where the $125 million budget went to, but it’s certainly not into the effects which look about as bad as the CGI in the first Harry Potter movie, nor the script which again does absolutely nothing to make this world and its inhabitants even remotely interesting. It’s even harder to determine what that huge budget paid for, because a lot of the film just takes place in the one location of the title character’s mansion (which, during a time when people want escapism from the reality of not being able to leave the house, isn’t really what many people want to see at the moment), where the sets aren’t even creative enough to justify the confined action, leaving the audience bored very quickly of their surroundings. Either way, it must suck for director Kenneth Branagh, because he’s been saddled with perhaps the worst movie of his directing career where not even his usual stylings can save a completely DOA script and some truly flat turns by talented actors.

Throughout this movie, I was comparing it in my head to another 2020 WTF disaster Dolittle, and I have determined that this movie is the worse film because at least with Dolittle you can tell there was passion behind the camera that just happened to be butchered by the studio; here, there is no forgiving the utter laziness and cynicism surrounding a product designed to latch onto a trend of YA movies that has long since expired, and dragging down with it a beloved series of books that not many people will want to read now thanks to this foul viewing experience.

Artemis Fowl is a mind-boggling disaster of an adaptation of Eoin Colfer’s book series, which completely mishandles its intriguing world and characters with numbing exposition dialogue, wooden performances, and bad effects that waste its all-too-costly budget in ways not seen since M. Night Shyamalan’s infamously bad adaptation of The Last Airbender. For the love of God, read the books instead; they’re bound to be at least more entertaining.