Army Of Thieves (Review) – A Thrilling Heist Minus The Zombies 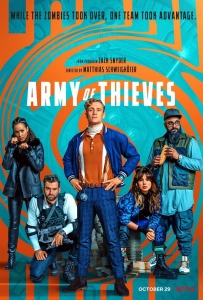 It seems that Zack Snyder has finally cracked the code to a stable cinematic universe – and all he had to do was swap dark, brooding superheroes with zombies.

Snyder’s undead heist flick Army of the Dead was a hit on Netflix earlier this year, with audiences and most critics responding warmly to the genre hybrid, igniting a new franchise for the streamer that includes prequels, anime series spin-offs, and eventually a sequel all set in the same universe. The first of these to come out is the prequel Army of Thieves, which nixes the zombie angle almost entirely – in a neat touch, the zombie apocalypse that is happening concurrently to the events in this movie is only ever relegated to background news bulletins and dream sequences – and puts the focus solely on the adventure of pulling off daring heists across the world.

The good news is that it mostly works, although its identity as a prequel means that the stakes for certain characters are never quite as high, for if you happen to have seen Army of the Dead then you will most likely know how particular things pan out. Nonetheless, as a fun standalone heist movie, this is pretty good entertainment.

Snyder only produces this one (and also has a story credit), leaving the director’s chair to Matthias Schweighöfer, who also plays the film’s protagonist Sebastian, who would eventually go on to become Ludwig Dieter, the German safecracker from Army of the Dead. Here, we meet Sebastian living a dull life in Germany, making scarcely-watched YouTube videos about his passion for safecracking. It is these videos that lead him to Gwendoline Starr (Nathalie Emmanuel), an internationally-wanted jewel thief who is looking for someone to help her and a team of criminals – including hacker Korina (Ruby O. Fee), getaway driver Rolph (Guz Khan), and the super-macho gunman Brad Cage (Stuart Martin) whose name and attitude is literally borrowed from the American action heroes he grew up watching – solve the puzzles on a trio of legendary safes that are about to be decommissioned for good. With not a lot of time on their hands as well as Interpol quickly catching up to them, the group must travel across Europe to break into the numerous vaults and crack open the safes using Sebastian’s expertise.

Army of Thieves is much more of a straightforward heist movie than Army of the Dead was, both in style and in plot, but even though zombies are nowhere to be seen for 95% of the movie, there’s still a lot to enjoy about this one just on its own terms. For one, the characters are a lot of fun; Matthias Schweighöfer’s character was a standout in Army of the Dead, and he manages to hold his own here as he’s promoted to lead, as his character and performance is genuinely likeable and enjoyable to watch as he gets more and more invested in the escapades he winds up in (he even cracks a good smile after outrunning the authorities during a thrilling chase sequence). The supporting cast is good too, with Nathalie Emmanuel making good use of the action experience she picked up from the Fast & Furious franchise, and equally entertaining turns by the likes of Stuart Martin as a loose cannon who thinks himself as a masculine action hero when, in reality, he’s just a massive prick.

As director, Schweighöfer has a good time bringing his own vision to the universe that Snyder kickstarted, with tight sequences filmed and edited with a real sense of energy, while also paying close tribute to Snyder’s own trademark style from slow-motion fighting to grimy hand-held cinematography. The tone is more comedic here, and more often than not the humour lands as much as it does in a typical Marvel movie, except for some odd moments which not only cause more confusion than genuine laughter, but could easily have been removed altogether (a dream sequence involving some of the zombies from other parts of this universe is set to music which I suppose is meant to be out-of-place, but is crammed in so awkwardly that I can’t entirely be sure about that). There are also certain characters who are just there to act villainous for no good reason: an Interpol agent played by French actor Jonathan Cohen is portrayed in the most cartoonishly nasty manner that he feels more like a caricature than an actual threat. For the most part, Schweighöfer keeps a steady pace and strong focus on the main characters, who again are fun and likeable enough to justify getting invested in them, even if you may already know how their story eventually ends.

Ultimately, that’s the problem when you make a prequel with a character whose fate has already been determined in a previous film: any stakes that might be introduced here seem to not matter as much because, unfortunately, something much worse is going to happen to them further down the line. It’s a problem I had with Black Widow after a few more views: while there’s still enough about that film to recommend from a thematic standpoint, there’s never a reason to get too involved with the titular character because, well, we all saw what happened in Avengers: Endgame. It’s the same thing with Army of Thieves, because although it’s a fun enough movie to enjoy in the moment, you know that the amount of further adventures you’re going to have with certain people are going to be limited at best, because their path has now been set in stone. It’s a little disappointing, because there are enjoyable characters in this movie who you honestly do want to see more of, except you can’t because things end in a certain way which makes any further in-between adventures all but impossible.

If nothing else, though, Army of Thieves is proof that Zack Snyder’s new zombie-infested cinematic universe does have legs, and should be reasonably satisfying to fans of the original film. Good for him: the dude needed this win after his other “SnyderVerse” fell apart.

Army of Thieves is a fun prequel to Zack Snyder’s Netflix hit Army of the Dead, getting good enjoyment out of its more straightforward heist narrative and the likeable main characters, even though its prequel status means that some of the stakes don’t feel as strong, especially given certain characters’ ultimate fates.

Army of Thieves is now available on Netflix.