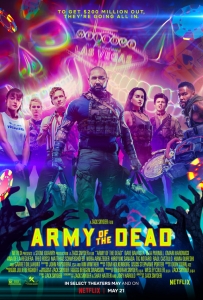 BASICALLY…: A group of mercenaries are recruited for a Las Vegas casino heist, in the midst of a zombie outbreak…

Zack Snyder has become so synonymous with comic-book movies from 300 to the “Snyder Cut” of Justice League, that most people tend to forget that the director first came onto the scene with a pure-bred zombie movie. His 2004 remake of George A. Romero’s Dawn of the Dead was a surprise hit with critics and audiences, with many praising the then first-time filmmaker’s firm grasp of the zombie sub-genre and his ability to stand well enough on its own next to Romero’s classic film, and of course it paved the way for Snyder to become the respected fan-favourite he is today.

Snyder’s return to the land of the undead comes more than fifteen years later, and of course a lot has changed about the filmmaker since then. His divisive stint in DC’s cinematic universe has, for better or worse, put the director on a much higher pedestal than before, allowing him access to much higher budgets with which he can realise some of his stranger, far more ambitious ideas outside of the comic-book plethora, and with Army of the Dead he’s been able to make something that only a far-reaching director with millions upon millions of dollars at his disposal could come up with. The good news, though, is that it’s frightfully entertaining, and very much a Zack Snyder movie in every single way, which can make or break it for you depending on your tolerance for the filmmaker’s excessive trademarks.

The film begins when an armed shipment of a live zombie is unexpectedly unleashed upon the city of Las Vegas, which soon brings mass destruction and chaos as people are turning into zombies left and right across the Strip. The entire city is quarantined, and scheduled for an imminent nuclear strike, but wealthy businessman Bly Tanaka (Hiroyuki Sanada) wants to reclaim the $200 million bills that have been stored in a safe underneath one of his Vegas casinos. He recruits mercenary Scott Ward (Dave Bautista) to lead a mission straight into the zombie-infested city and reclaim the money, with the promise of a large cut should he and his team make it out alive with the cash in hand. Soon, Scott and his numerous teammates – too numerous to mention, but including the likes of saw-wielding Vanderohe (Omari Hardwick), German safecracker Dieter (Matthias Schweighöfer), helicopter pilot Peters (Tig Notaro) and, most reluctantly, Scott’s estranged daughter Kate (Ella Purnell) who has her own reasons for wanting to go on the mission – find themselves fighting off all sorts of undead Las Vegas figures, some of which have established a hierarchy and anointed themselves as alpha figures amongst the shuffling regulars, which makes the stakes all the more apparent on both sides.

That isn’t even mentioning the fact that there is a zombie tiger just wandering about like a regular tiger, only with a rotting skull and a much fiercer appetite for blood. It’s bonkers, but kind of awesome; and that’s pretty much Army of the Dead in a nutshell.

Snyder is clearly having the most fun he’s had in a long time with this film, combining traits of the classic zombie epic with a full-blown heist movie, and doing so with a clear sense of humour but also a real drive to establish this world and the way it reacts to a major incident such as a zombie outbreak. It’s interesting seeing how the rest of the world is still functioning while all the chaos has been relegated to just this one location, with political shows (one of which featuring a cameoing Sean Spicer, of all people) debating the ethics of introducing new zombie prevention laws into society, while people have even begun making their own popular YouTube channels where they simply kill zombies on-camera and promote their social media platforms afterwards. The world-building is such that you really do buy a lot of the functions and personalities that have resulted from it, whether it’s Tig Notaro’s deadpan nihilism or the fact that there are entire refugee camps dedicated to housing former Nevada residents, and through his traditional style Snyder manages to give everyone and everything – even the zombies themselves, which are brought to life by some decent make-up and, in the case of some of the more advanced types, also get a chance to partake in choreographed fights against Dave Bautista and his co-stars – their own believable quirks to appeal towards fans of not just zombie movies but big and ambitious action movies in general.

Of course, there are also a number of lesser stylistic trademarks that Snyder brings here which won’t exactly win sceptics over. For one, it is much longer than it needs to be at just under two-and-a-half hours long, and I know that I say that after praising Zack Snyder’s Justice League which was nearly double the length, but even that film didn’t exactly need those extra minutes to tell that particular story. You can tell that some scenes needed trimming every now and then, and entire characters could easily have been either removed entirely or combined into other characters; Bautista’s daughter turns out to be mostly useless throughout the movie, and ends up getting so many people killed because of her thoughtless actions, which doesn’t exactly make you sympathise with her as much as the film wants you to. The film perhaps needed one final polish of the script before production to make it more airtight, or at the very least get it down to a more reasonable length because even on Netflix this movie feels like it takes far too long to tell this particular story.

Even with its bloated length, though, Army of the Dead is still one of Snyder’s most purely entertaining films in a number of years, containing lots of gory action, fun characters, and just the most insane imagery that you could imagine a zombie/heist mash-up could produce. It’s little wonder why there’s already a number of prequels and spin-offs in the works, because Snyder has crafted a world that is ripe for discovery, and should provide us with plenty of undead enjoyment for ages to come.

Army of the Dead is Zack Snyder’s most purely entertaining movie in years, with the director bringing in his familiar style to establish an intriguing zombie-ridden world while also executing a fun and action-packed heist plot for us to feed on.

Army of the Dead is now available on Netflix.