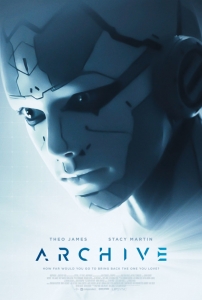 How many movies about artificial intelligence have to be made before people finally catch on to the idea that maybe, just maybe, it’s not exactly sensible to basically play God? Sure, there’s been plenty of great movies over the year which surround self-aware technological lifeforms – Blade Runner, Ex Machina, Upgrade, the list goes on – but most of them end up saying practically the same thing: that sentient man-made machines will almost always turn against their masters in some capacity.

Hell, the past few days alone have given us not one but two examples of films with robotic beings as its central characters, with Outside The Wire and now Archive, the feature directorial debut of visual effects artist Gavin Rothery, both exploring the dangers of developing some all-too efficient AI. The difference between Outside The Wire and Archive, though, is that the latter actually has stuff to say about it, and serves itself a much more fanciful, if still derivative, sci-fi thriller that’s both stylish and faintly intriguing.

Set in the year 2036, our main character is George (Theo James), a scientist working alone on an isolated base somewhere in the Japanese mountains, with only a couple of robots he’s designed for company. He regularly pines after his wife Jules (Stacy Martin), who is dead from a car accident; however, he uses whatever resources he has to develop a robotic body and an AI which directly resembles her, as a means to bring her consciousness back to life. However, it is left to us to wonder if this is a truly romantic sentiment, or a slightly more sinister act of retaining control in his tragic relationship.

Like Outside The Wire, a lot of this plot is taken from a bunch of other sources, right down to the sets which, given that Rothery previously had a heavy hand in designing the look of Duncan Jones’ Moon, also seem strikingly familiar. However, Archive one-ups that film by actually putting a bit more thought and effort into exploring some of its deeper themes of love and even family, all told with a heavy sci-fi lean. These themes are often represented through George’s relationships with each one of his own robots, which provide the film with some of its more interesting dynamics; I like how these bigger, bulkier prototypes that he designs essentially have the mental capacity of children, with the first, much larger model having the mannerisms of a five or six year old child, while the second and much more vocal one is basically a sullen teenager, which even grows jealous of George’s latest model which is physically far closer to his dead wife than she will ever be. It leads to some amusing, and sometimes even heavily dramatic, conflict which you’re never entirely sure is going to suddenly become a stalker thriller or not, but you’re at least curious enough to see where exactly things go with these characters, especially since they all seem to function well together already.

The film has a good atmosphere to it, thanks to cinematographer Laurie Rose who captures the stark isolation of the lead (human) character and his snowy surroundings, always looking and feeling like it’s both peaceful and haunting for him and his robot companions to be there. Steven Price’s score also elevates the mood with its sometimes powerful musical stingers, while Rothery’s overall direction is tight enough without being too restrained by the limited locations. As for the actors, Theo James does decent work as ever, while Stacy Martin – in multiple roles, not just as George’s dead wife (seen in flashbacks), but also as the voice of the teen robot and as the newer, sleeker model – is an extremely alluring presence whose role certainly invokes memories of Alicia Vikander in Ex Machina, but the French actress easily makes this role (and her numerous others) her own.

There are, though, a few notable flaws which don’t exactly ruin the film, but do halt it from getting any more decent than it already is. Its pacing, for one, is perhaps a bit too slow; it takes quite a while for things to really get moving, and even once things seem as though they are indeed moving towards some kind of resolution, you’re left surprised when you find out that there’s still at least another half an hour of the movie left. At several points, it also introduces plot points and characters which ultimately end up going nowhere; mid-way through, we are introduced to a slimy-looking risk assessor who looks like he’s just wandered off the set of Total Recall, and at first it seems like the film is setting him up to be the de facto villain, but then he virtually disappears from the rest of the film, almost never being brought up again. Some of that, in a way, could be explained by a reveal that is shown during the film’s final few moments, but it’s an ending which only invites more questions than it gives answers, and seems to just be a twist for the sake of having one, regardless whether it makes complete sense or not.

I suppose, in a way, Archive accurately represents where we are right now in developing technological lifeforms of our own; it’s far from perfect, and there’s a lot of work that needs to be done, but it’s a promising start (in this case, for director Rothery) for someone who might well be on his way to developing something a bit fresher and more substantial in the future.

Archive is a decent sci-fi thriller that can often feel derivative of other works, but it has its own style and its own approach to certain themes and characters which make it a worthwhile directorial debut for visual effects artist Gavin Rothery, even though his script here perhaps needed a bit of fine-tuning before its construction.

Archive is out now on digital platforms.