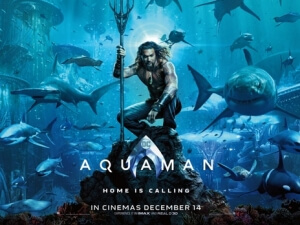 BASICALLY…: Arthur Curry (Momoa) is sent on a reluctant quest to reclaim his rightful place as the ruler of the Seven Seas…

Six films in to its own shared universe, DC seems to have finally allowed itself to have some fun; it really shouldn’t have taken them this long, but better late than never, I suppose.

Up until now, their films have been mocked for their endlessly grim and dour tones, not to mention some questionable CGI which even one of their better films Wonder Woman couldn’t entirely shake away. Thankfully, they seem to now be on a course of correction when it comes to their overall quality; Wonder Woman largely eradicated the hopelessness and bombastic destruction that its predecessors bathed themselves in, and while Justice League certainly had flaws it set itself a much-needed lighter tone that actually made it work far more than it should have. But with Aquaman, the first feature film to headline the underwater superhero, DC has at last made their most consistently entertaining film which hopefully sets the standard for all other films to come after.

Taking place after the events of Justice League, Arthur Curry/Aquaman (Jason Momoa) – whose father (Temuera Morrison) was a human lighthouse keeper, and whose mother (Nicole Kidman) was the Queen of the underwater kingdom of Atlantis – is approached by warrior princess Mera (Amber Heard) who asks him to take his rightful place on the throne, after his pure-Atlantean half-brother Orm (Patrick Wilson) begins plotting a takeover of the surface world in retaliation for mankind’s pollution of the seas. This sends both Curry and Mera on a quest that takes them below the surface, across the world, and into the firing range of vengeful pirate known as the Black Manta (Yahya Abdul-Mateen II), who has taken Atlantean technology and gone out on a quest to kill Curry after the death of his father.

Director James Wan, whose previous go at action blockbuster fare was the incredibly entertaining Fast & Furious 7, is a perfect fit for this particular character, because Aquaman has for many years been considered to be the least impressive superhero out of DC’s entire roster, yet Wan brings the same crazy energy he brought to that movie that makes all the silliness seem somewhat credible, no matter how ridiculous it may seem. He gives the film such a lovable sense of adventure and excitement that has never before seen in the cinematic DC Universe before, complete with bright and clear cinematography (Scenes set during the day! Clear blue skies! Who’d have thought we’d actually see these things in the same world as Batman V Superman: Dawn of Justice or Man of Steel?), and visual effects which certainly don’t look real but are still among some of the finest that this franchise has brought to the table yet – and let’s be honest, this movie couldn’t be done unless it heavily used CGI to create this world.

Most importantly, Wan never takes things too seriously, as he includes a healthy sense of humour and an enormous helping of fun throughout to help the audience learn and understand amidst all this intricate world-building. Wan seems to be in on the fact that this entire world is rather silly, so he doesn’t even try to bring it some level of self-importance like a lot of the other DC movies have; instead, he doubles down on the silly, from some of the imagery to the quips that characters trade with each other, and in effect he makes this world and its light-heartedness much more enjoyable than anything we’ve yet experienced in this universe. He’s also found a very capable leading man in Jason Momoa, who stays mostly true to his promising debut as the character in last year’s Justice League, but here is allowed much more room to breathe and let his take on the character be its own thing, which is thankfully a funny, charismatic and all around likeable persona who you’d be very comfortable having a few round of drinks with. Even the villain, usually the weakest part of any DC movie – or even some of the Marvel movies, while we’re on that subject – is a lot of fun, because Patrick Wilson is clearly having a blast as he’s hamming it up like mad, being all shouty and campy and being utterly delightful in how over-the-top evil he is. The rest of the cast is on the same wave-length as both the hero and villain, as on one end you’ll have other actors like Amber Heard and Dolph Lundgren being charming and fun, and then on the other there’s Willem Dafoe and Yahya Abdul-Mateen II having plenty of fun as they go all out in this fantastical world that’s been conjured by Wan.

It is not, however, without a couple of flaws; for one, it is a little longer than it needs to be, and you can see which parts could have easily been cut out for time, but you can also understand why they were kept there to begin with, such as to develop the characters and give them more of a personality. The overall plot, as well, is somehow both fairly straightforward and surprisingly a little complicated; there are so many things that our hero has to do in order to achieve his overall goal that sometimes it gets difficult trying to keep track of it all, but you do get a rough sense of the direction it’s going in, even if there is quite a lot of stuff that’s happening all at once.

When those are the most notable flaws I can think of for a DC movie, however, you know that means this is by far one of the better ones, and certainly the most entertaining out of the lot so far. As much as I enjoyed Wonder Woman, there were still some moments where it could have used a little cheering up, which isn’t the case with Aquaman, which is a firm reminder of what these DC movies should have been from the very start; fun, energetic, and filled with wonder and imagination. Again, I don’t know why it took them six movies to figure that out, but at least they’ve started to get their act together now.

Aquaman is the most consistently entertaining DC movie to date, and a very fun movie in its own right thanks to direction by James Wan that never takes itself too seriously, and a funny and likeable lead character to guide us through this awesomely-constructed world.