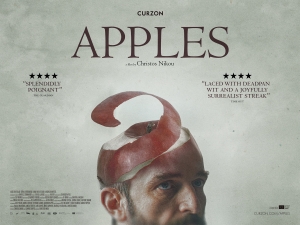 BASICALLY…: When a mysterious pandemic causes a strain of amnesia, a man (Servetalis) enrols in a recovery program for patients to create new identities…

This review of Apples was conducted as part of the Dublin Film Festival 2021.

The “Greek Weird Wave”, as it has apparently become known, has seen the rise of local filmmakers like Yorgos Lanthimos and Athina Rachel Tsangari with their absurdist, often haunting ditties like Dogtooth and Attenberg entering part of the overall film conversation in recent years. Now, it’s the turn of Christos Nikou – previously a script supervisor and assistant director on Lanthimos’ Dogtooth – to enter the frame with Apples, and when you start to hear what it’s about, it could not have arrived at a more convenient time in the world.

That is because Apples takes place during a pandemic. No, nothing like the one we’re all still going through right now, but rather a mysterious and unexplained phenomenon that is causing people everywhere – at least, in Greece – to suddenly lose all of their memories. People who are found to have developed this random strain of amnesia are sent to facilities where they are closely monitored by doctors who, unlike most other people (more on that in a bit), are curious about this strange new infection. One of the people to take advantage of this new system is Aris (Aris Servetalis), a lonely and isolated man who feigns memory loss in order to get access to one of the facilities, where he learns about an intricate new program designed to help amnesiacs develop a brand-new identity, and therefore a fresh start in life. Aris uses the program to try and rebuild his own life, though it comes with some unexpected developments surrounding a past which, unlike others around him, he is unfortunate enough to remember.

Much like other Greek Weird Wave movies before it, Apples is a very peculiar watch. It contains many of the attributes you’d normally see in one of these films, from the dry dialogue and performances to an increasingly bizarre and oddball sense of humour that only certain audience members will be able to digest. However, it strikes a slightly different tone than, say, Lanthimos’ The Lobster, because there appears to be much more of an emotional core at its centre which can be found in its themes of loneliness and especially identity. So much of the film revolves around Aris’ attempts to reintroduce himself into society, as guided by some very strange guidance tapes by the doctor which encourages him to take photos of everything he does, whether it’s riding a bike or even having sex (leading to awkwardly asking a stripper to pose with him in a polaroid picture), all of which lead to some late reveals about his past which suddenly make everything he’s been doing up to this point a whole lot more sense – at least, in this strange universe that it all seems to be taking place in.

The world that Nikou has created here is purposefully analogue; smartphones are never seen, while people still use and own items like cassette players, polaroid cameras and older car models. It’s as if this is an alternate universe where things such as social media and advanced technology never existed, which explains all too well why society in general here isn’t anywhere near as panicked or even concerned about this memory-losing pandemic, because there is no such platform for people to spread fear or misinformation as there obviously is in the real world. It opens up a wave of conversations about how things such as Twitter and Facebook have absorbed so much of our identity that we can get ourselves worked up over the smallest, most insignificant things while blissfully ignoring the bigger problems in the world; here, nobody seems to care because there is nothing for them to do except live in the moment, as opposed to waste their time complaining online all the time. It’s an interesting and even intelligent bit of commentary that Nikou displays here, and it certainly gives his story a much wider dimension hidden underneath some of the surreal plotting and character development that Apples otherwise focuses on.

Ultimately, while I do admire this film for what it’s clearly setting out to do with its themes and messages, it boils down to personal taste, and like I have done with other Greek Weird Wave movies I found this a somewhat dry pill to swallow. It’s hard to empathise with many people in this beyond the intricate plotting because the performances sometimes lack the proper resonance to really get invested in their journeys, and although it intentionally leaves a lot of things ambiguous – what is the cause of this pandemic? Why isn’t our lead truly infected? In what universe do you cut out the Texas from the title The Texas Chainsaw Massacre? Expect answers to none of these and more – there are still many aspects to this otherwise admirable film that felt a little empty for me.

By no means is it a bad film, but Apples is, like other Greek Weird Wave films, a bit too weird for my liking.

Apples has some very interesting things to say about the nature of loneliness and identity, especially with its surreal analogue world that provides solid commentary on how certain things have warped our own reality, but it may perhaps be a bit too emotionally stunted and dry to resonate with some audiences.

Apples will be available to rent exclusively on Curzon Home Cinema from Friday 16th April 2021.