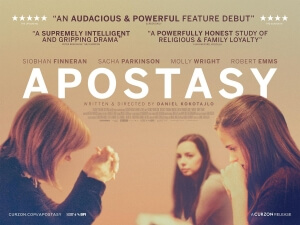 BASICALLY…: A family of Jehovah’s Witnesses have their faith tested when they are forced to shun a family member…

The phrase “write what you know” comes up a lot when it comes to giving advice to budding screenwriters, and it is a phrase that writer-director Daniel Kokotajko has very much adopted for his debut feature Apostasy.

Prior to filmmaking, Kokotajlo was raised as a Jehovah’s Witness before leaving the Christian sect during his teen years, and through a combination of his own experiences with the religion as well as numerous other more devastating accounts, he has made a film that seeks to expose the cold and twisted practises of the faith that more and more people nowadays seem to be recognising, and it is a quietly powerful and emotional triumph for the first-time writer and director.

Taking place in the small Manchester town of Oldham – not far from where Kokotajlo himself used to live – Apostasy is about a small family of devout Jehovah’s Witnesses, including mother Ivanna (Siobhan Finneran) and her two daughters Luisa (Sacha Parkinson) and Alex (Molly Wright). Their lives fully revolve around their religion, and they have devoted their lives to practising the rules bestowed upon them by the elders that run their local Kingdom Hall, including learning other languages so they can approach foreign residents at their homes to advertise their beliefs. However, their lives start to fall apart when Luisa becomes pregnant, and is swiftly “disfellowshipped” from the congregation – but even more harrowing is the fact that the elders have instructed Ivanna and Alex to keep all contact with the now excommunicated Luisa to an absolute minimum, not even acknowledging her when she’s in the same room. This is just the first step towards this family becoming completely fractured beyond repair, and the results are nothing short of extremely disturbing.

From the moment the film begins, you can tell right away that this family – a husband and father is never mentioned or seen – has already been ruined in a sense by their faith before the inciting incident. Ivanna, as the matriarch, strictly upholds her beliefs and stubbornly insists that her daughters follow her example; she uses passive-aggressive language when Luisa mentions her studies at art college clash with meetings at the Kingdom Hall (a scene inspired by Kokotajlo’s own upbringing, as he also went to art college and was told almost verbatim what Ivanna tells her daughter by the elders at his own congregation), while Alex is made to feel like dirt for having a blood transfusion as a baby to counteract her anaemia, a practise that Jehovah’s Witnesses are wholly against. The latter of the two daughters is the most susceptible to the practises of the faith, and you can already sense how much it has warped her own world view when she is seen berating other people for their differing faiths, but also wrestling with her own consciousness in numerous scenes of her praying to Jehovah that act as a visual alternative to mere narration. From how this family acts with each other and with other people, even before Luisa falls pregnant, you can feel how fragile and hollow they are as people, having allowed their religion to completely overshadow their basic understanding of common decency, and what Kokotajlo manages to show here rather effectively is the sheer lack of empathy that can come from a lifetime of religious devotion to what is essentially a cult, and how when pushed to the utmost limits it can be even harder, but not necessarily right, to maintain.

Kokotajlo has made a film that is both extremely tough to watch – in all the ways that it is intended – and also vital for ex-Witnesses such as himself, who may have either left on their own accord or, like Luisa in the film, completely shunned by the church they have spent most of their lives following. He makes it no secret that the rules and practises that this religion practises are disturbingly twisted, especially when it comes to treating one’s own family member who may have committed acts deemed offensive by the congregation like mud on the bottom of a show; elders are shown to be preaching what they claim to be the word of God, including mentally preparing them for an imminent Armageddon, yet their cold and extraordinarily harsh treatment of certain members such as Luisa is anything but Christian. There is also a rather creepy pairing between 18-year-old Alex and new elder Stephen (Robert Emms) who is almost twice her age, a union that is encouraged by virtually everyone around her because it is seen as a great honour to marry an elder, which uncomfortably mirrors other extremist views on love and relationships in certain other alternative religions, particularly in how Alex apparently has very little say in any of it except to link it to the rules she follows a little too carefully.

It’s a rather damning portrayal of the extremely controversial religion, but it is also a highly necessary one, if only to show how difficult and isolating life as a Jehovah’s Witness can be from the creative perspective of someone who has been down that particular path. Kokotajlo thoughtfully exposes the harsh practises and twisted philosophies these people can use as a mean to further brainwash their congregation, while simultaneously doing irreversible damage to certain people’s mental wellbeing and overall outlook on life, and he does it with a highly compelling story about a family torn apart by their stubborn attachment to their faith, incredibly complex performances from his three leads including a star-making turn from young Molly Wright, and a harrowing conclusion that doesn’t hint at a happy ending in the slightest, not when this rather troublesome religion is still a part of these people’s lives.

It’s a highly compelling and powerful film about a way of life that only someone who has lived it could tell with such ferocity, and Kokotajlo nobly steps up to the game with this brave and steadfast exposé that should be applauded.

Apostasy is a compelling and quietly powerful exposé on the twisted practises of Jehovah’s Witnesses that writer-director and former Witness Daniel Kokotajlo holds back no punches on with this emotional and provocative family drama.