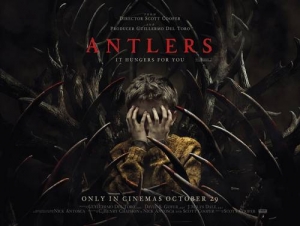 BASICALLY…: A teacher (Russell) and her sheriff brother (Plemons) investigate a young boy (Thomas) who is holding a dark secret…

A horror movie with a premise like the one in Antlers already sounds like a grim affair, but when you add Scott Cooper’s name to the production, its grimness is finally official. Cooper is a director who has made some incredibly bleak movies over the years, from his brutal crime thrillers Out of the Furnace and Black Mass, to his Western film Hostiles which opens with a family being slaughtered by a Native tribe (even his debut feature Crazy Heart, by comparison his lightest film to date, is still about an alcoholic country singer), making him a surprisingly natural fit for a movie like this.

Cooper collaborates with producer Guillermo del Toro on Antlers, combining the former’s grim world-building and the latter’s adoration for dark mythological fairy tales in an appropriately grim fairy tale which doesn’t entirely make the most of its unexpected mash-up, but makes for a bleak and rather chilling creature-feature that’ll intrigue people to say the least.

Set in an eternally-overcast town in Oregon, we follow a young boy named Lucas (Jeremy T. Thomas) who, unbeknownst to anyone else, is secretly keeping his younger brother Aiden (Sawyer Jones) and their meth-dealing father Frank (Scott Haze) in the attic of his rundown, derelict home in the mountains, after the two of them develop a mysterious sickness after an encounter with an even more mysterious figure. Lucas’ unkempt and disturbed nature attracts the attention of his school teacher Julia (Keri Russell), who suspects that the young boy is suffering from abuse, and along with her sheriff brother Paul (Jesse Plemons) investigates the strange circumstances surrounding Lucas and his family, only to find that something much more terrifying is about to be revealed.

Like all of Cooper’s previous films, Antlers wears its bleakness like a badge of honour. The mise-en-scène is thoroughly depressing, with constantly gloomy cinematography spread all over this miserable atmosphere; it always looks as though a horror movie has already happened in this town, long before the events of this one take place. The lives of these characters are also far away from the rays of sunshine; you not only have this poor kid who’s already living in a rundown house with what little of his family he has left, and is now having to look after them before the inevitable happens, but you also have Keri Russell and Jesse Plemons who are also dealing with their own dark pasts which, from what we can gather from some disturbing visions and flashbacks, must have been pretty tough to stomach. The movie is unapologetic in how dark it is, which gives it a gritty edge that feels real enough for these characters to live uncomfortably within, and the acting all around is good at really making you feel for a lot of them at certain points.

However, when it has to be an actual horror movie, it still works fine but you can quickly point out more of the conventions that come with this genre. There are characters who do some very stupid things only because the movie needs somebody to die, while others are mostly stock archetypes without much for them to do (the movie even comes with its own Stephen King school bullies, which admittedly does have a pretty decent payoff). However, there is some cool stuff to admire, like a number of the practical effects used to create the rather creepy-looking monster, while there are some particularly gory shots which also must have been pretty fun to create behind-the-scenes; this is obviously where producer Guillermo del Toro’s influence shines most, and it’s certainly a fun ride that makes it an interesting double-feature with another del Toro-produced monster horror, Mama.

Despite the script eventually trailing down a fairly familiar path by the third act, it’s nice to see a horror that isn’t just a standard jump-scare movie and actually takes time to establish its characters and its scares, which does show that Scott Cooper is good at driving a compelling enough story that’s shrouded in complete darkness. It might not be every horror fan’s go-to example of gritty social drama crossed with mythological monster flick, but Antlers is a decent outing for a director so known for going dark that it’s surprising he hasn’t done a horror movie before.

Antlers is a dark horror from director Scott Cooper which is unapologetic in its bleakness, giving the story a gritty edge that gives it weight amongst the more traditional, but still effective, horror elements.

Antlers is now showing in cinemas nationwide – click here to find a screening near you!