Another Round (Review #2) – A Sobering But Life-Affirming Boozy Drama 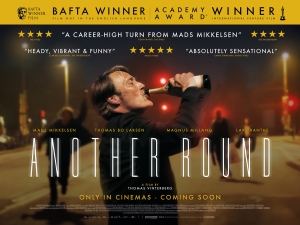 BASICALLY…: Four friends conduct an experiment to see how their lives improve with an increased amount of alcohol in their system…

My previous review for director Thomas Vinterberg’s Another Round – done last October during its run at the BFI London Film Festival – was perhaps a bit harsher than others; while I didn’t dislike it by any means, at the time I found it to be a very safe film which didn’t take as many chances as its provocative premise may suggest, and I even compared it somewhat unfairly to other, more shocking movies to emerge from the Dogme 95 initiative (which Vinterberg co-founded with fellow Danish director Lars von Trier), like The Idiots.

A second viewing radically alters that opinion for two very distinct reasons: one, it was in a cinema as opposed to watching it on a laptop, which right there creates a far more immersive viewing experience; and two, there are things which I wasn’t able to pick up on the first time that really show that it perhaps wasn’t as safe and conventional as I had presumed – and that is a very, very good thing.

But first, a brief reminder of the plot: four friends – Martin (Mads Mikkelsen), Tommy (Thomas Bo Larsen), Nikolaj (Magnus Millang) and Peter (Lars Ranthe) – are teachers at a Danish high school, but have become dissatisfied with their lives and careers, especially Martin whose frequent low moods are even starting to affect his teaching methods. One day, they learn about a theory by Norwegian psychiatrist Finn Skårderud, wherein he states that humans are born with a blood alcohol level that is lower than it needs to be, and that it should be maintained at about 0.05% to lead a more productive life. Intrigued, the four friends decide to conduct their own experiment to see what kind of effects that daytime drinking can produce, and at first it actually seems like the results are overwhelmingly positive; they’re much more lively in their classes and their home lives, with Martin even starting to reconnect with his distant family, and their general attitudes are considerably more lively than they previously were. However, it’s when the group decides to take things a little further that the all-too real consequences of consistent alcohol consumption start to emerge.

While it is certified as a 12A here in the United Kingdom (a milder certificate than what I was honestly expecting), Another Round contains some firm themes that are decisively adult-oriented. Beyond the obvious alcohol-centric plot, which covers a lot of ground when it comes to casual drinking and full-blown alcoholism, the film is a rather sensitive portrayal of masculinity, particularly in those who have accelerated past their prime. All four of the main characters are in their 40s, and in some way stuck in a rut that has affected their mental health and their overall feelings of emasculation; for example, we learn that Martin gave up both a promising career as a dancer and a chance to get a PhD to start a family, which has left him a shell of who he once was, unable to connect with either his wife or sons, and switching to auto-pilot mode when he’s blandly delivering History lessons to his high school pupils. The others, particularly Tommy who already seems to have a small drinking problem before they even start their experiment, have also started to display early signs of mid-life crises, and seem to convince themselves that their manhood will automatically return to them as soon as they start drinking regularly. In that regard, Another Round isn’t so much about the trials and tribulations of alcohol consumption, but rather about four miserable men who decide to reclaim what they think they’ve lost through this radical experiment, which is a far more meaningful and ambitious set-up than what I had originally concluded.

It is also interesting to watch this movie on the big screen for this second viewing, because while I was able to gather enough thoughts from just watching it on a laptop, the underlying themes and emotional drama both hit a lot harder when you’re far more immersed into the environment. You are able to greater understand and analyse the dialogue when in the cinema – which is saying something, because this movie has English subtitles – as well as pick up on why certain characters behave the way they do, or why they commit some of the heart-breaking acts that they do, all in ways that really show director Thomas Vinterberg’s strength in mining the humanity from the grisliest of situations. Strong performances from Mads Mikkelsen and his fellow leads also open up newer emotional avenues that weren’t that easy to spot during that first viewing, because knowing where some of these characters will eventually end up makes a number of their choices and deliveries all the tougher to stomach, and the actors manage to suck you in to their respective hardships while also putting their vulnerability on full display.

Perhaps the main lesson to take away from this is that sometimes, especially with a film as emotionally complex as Another Round, a second viewing can be essential. There are times when that first screening comes and goes, and you’re left to react in the moment with the basic information that you have, which might not give you all that you really need to fairly judge and analyse a movie. I’ll admit that looking back on my first review on this film did make me realise how little I even scratched its surface, which says a lot more about me than it does the film; I know that I am not God’s gift to movie criticism, but I always try my best to deliver as honest and truthful a review for every film I see, and on occasions like this where I feel like I seriously did not give the movie enough credit for its ambition and much more provocative themes, I am glad that I have the opportunity to revisit them and conjure up much more thoughtful and fair analysis the second time round.

So, yes, Another Round is a pretty great film (it’d have to be, otherwise it wouldn’t have won Oscars and BAFTAs by this point) – it just took me more than one viewing to actually realise it.

Another Round is a strong concoction of adult themes such as emasculation and optimism, all told from director Thomas Vinterberg’s vivid and life-affirming vision that’s both comforting and sobering at the same time.

Another Round will be released in UK cinemas on Friday 2nd July 2021 – click here to find a screening near you!