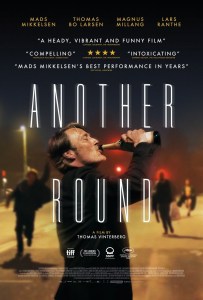 BASICALLY…: Four lifelong friends test a theory that maintaining a consistent level of alcohol in their blood can improve their lives…

This review is of the cut shown at the BFI London Film Festival in October 2020 – the UK release date is currently listed for November 27th 2020.

2020 may be the year from hell – and we’ve only got two-and-a-half months left of the damn thing – but turning to booze in order to make the pain less frequent isn’t going to solve anything. Now, I like a drink as much as the next person, but it isn’t a life-altering drug that will make everything better in the long-term, and if you aren’t careful or at least doing it in moderation then you could be prone to a disease that’s been around a lot longer than COVID-19 has.

Thomas Vinterberg’s Another Round, however, isn’t concerned about any of that (at least, for its first half), and instead takes the viewpoint that a little bit of alcohol in your system is sometimes the best remedy for an unsatisfying existence. That probably sounds like a concerning message if you’re strictly anti-alcohol or have gone through personal problems with alcoholism in the past (or even known somebody close who has or still is), but the film is wise enough to examine both the pros and cons of frequent alcohol consumption, and offers a surprisingly uplifting theme of taking control of your own life, even if it ultimately isn’t as provocative as it could have been.

The film revolves around a group of senior-year teachers at a school, among them Martin (Mads Mikkelsen) who appears to have lost all passion for his job, his class and his family life. While they’re out together celebrating a birthday, Martin and his pals Tommy (Thomas Bo Larsen), Nikolaj (Magnus Millang) and Peter (Lars Ranthe) discuss a theory put forward by Norwegian psychiatrist Finn Skårderud, who deduces that the blood-alcohol content in humans needs to be maintained at a consistent level in order to make them feel more active and fulfilled in their lives. The four friends decide to put the theory to the test by consuming a regular amount of alcohol throughout the day, which they almost immediately start to feel the effects from (in more ways than one) as they begin to become more animated and jovial in their personal lives. However, things start to go off the rails when they decide to push their experiment a little too far, with sometimes funny but other times devastating consequences.

It is admittedly fun to watch these four leads, the normally-reserved Mikkelsen especially, having plenty of joy to spare while being slightly off their faces at work, at home or with each other, and you can see the pure bliss in their faces when they become inspired to amp up their lesson plans with more active and far less mundane methods (Larsen’s Tommy is a children’s football coach who riles his young players up with confidence and support, while Ranthe’s Peter is a music teacher who encourages his choir of high schoolers to use their senses to deliver a more emotional performance). But while this first half may seem like it’s fundamentally pro-booze, to a point where you start to question if it’s irresponsible to promote it so lovingly, the second half does explore the negative connotations that come with an over-excessive reliance on alcohol; relationships start to crumble, careers are ruined, and one of them even starts displaying unignorable signs of full-blown alcoholism. It’s a stark contrast to the fun-loving tone of what came before, but a firm recognition on Vinterberg’s part that he is tackling an issue which, if not treated properly, can turn into a serious health problem down the line.

The director is quick to show just how damaging an uncontrollable level of alcohol can be to the human system – a sequence where the group consumes an extremely strong collection of spirits to a point where they can barely stand while in a supermarket is funny but also very unnerving at the same time – yet he also clearly has plenty of respect for the joys it can provide when moderated (in one telling scene, one of the teachers gives an extremely nervous student a few swigs of booze in order to help them during an upcoming test, of which there appear to be zero negative consequences). It’s as though Vinterberg wanted to make a much more provocative and less conventional movie, in the same vein as fellow Danish director Lars von Trier’s The Idiots, but wasn’t fearless enough to see it all the way through, instead meshing together a strange mix of both risky arthouse and accessible crowd-pleaser that confuses the overall message in the process.

The film works fine enough as it is, with strong performances all around and good filmmaking on Vinterberg’s part, but for a film that sets out to explore the joys and upheavals that regular alcohol consumption can bring, it feels a lot safer than it could have been.

Another Round takes an interesting premise about the positive effects of regular alcohol consumption to fair-minded but noticeably safe avenues, which confuses the overall message and slightly dampens its intended impact, despite noble turns by a group of strong actors including Mads Mikkelsen.