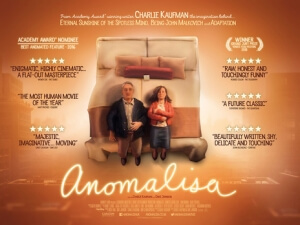 BASICALLY…: Whilst on a book tour, author Michael (Thewlis) – who has become so distant that everyone around him (all Noonan) looks and sounds the same – meets a genuinely unique soul in the form of Lisa (Leigh)…

Nobody in film has quite a unique vision of life as Charlie Kaufman does. He can craft seemingly barmy ideas like people discovering a portal into the mind of John Malkovich (needless to say, that’s Being John Malkovich), a scientific progress that removes the memories of past loved ones (Eternal Sunshine of the Spotless Mind), a stage director constructing a life-size reconstruction of New York in a warehouse (Synecdoche, New York) and even writing about himself writing a script with an imagined twin brother (Adaptation), and yet manage to find the right balance of drama and pathos to make the project an overall satisfying experience for niche-seeking audiences.

The latest in his writing filmography, and only his second film as director after Synecdoche, New York, is Anomalisa – a film that perhaps represents Kaufman at his most grounded, and yet also at quite possibly his strangest.

Sharing a director’s credit with Duke Johnson, and adapting his own play of the same name, we follow a man named Michael Stone (David Thewlis), a self-help author who arrives in Cincinnati as part of a book tour, checks into his hotel, interacts with some people, and then goes about his business. Simple enough, but we neglected to mention the fact that the entire film is done through stop-motion animation, and despite at least ten speaking parts there are only three actors playing them.

Significantly, Tom Noonan is the voice of almost everyone else in the entire thing: man, woman, child, even on the soundtrack (his voice dominates a version of “The Flower Duet” early on). This is because Michael sees the world as if everyone but him had both the exact same voice and likeness to one singular person, showing not just how disconnected and isolated Michael has made himself through living a mundane family life and making a series of insecure choices, but also how narcissistic and even unsympathetic his character can be. In some respects, by neglecting the outside world and seeing himself as a singular specimen against a constructed representation of the world, Michael has become so withdrawn and self-absorbed that he’s become a monster, one that takes pleasure in actively pushing away other people so that he doesn’t let his ego fall in with the crowd and, essentially, become yet another drone in reality.

Nowhere is this more hammered in than via the animation which, though not as polished as Laika Animation’s films, is impressively jerky by itself. It is not designed to look realistic in the slightest – you can see the mechanical bolts on everyone’s faces, as well as the seams where the mouths are placed – but for the budget they had (most of it being raised during a Kickstarter campaign) it’s very impressive stuff reminiscent of, say, the earlier days of Aardman, and more importantly, it serves the underlying situation with everyone having the same face, most of the time not even looking that natural, almost like an invading alien species that’s collectively taken on the form of the one human they were able to abduct. It can be quite terrifying, particularly an opening overlay of several conversations all with Noonan’s voice as well as a later sequence that builds and builds to an almost psychological climax, and at the same time a sole reminder of just how messed up a person Michael really is.

However, Michael soon finds hope and solace in the one other person who sounds completely different to everyone else: a shy woman named Lisa (Jennifer Jason Leigh) who is staying in the same hotel with her friend and who also happens to be in the area to meet him on his tour. Michael, initially thrilled with finally being able to make a connection with someone, starts to act creepily predatory towards her, culminating in a lengthy sequence that eventually ends in the best puppet sex scene since Team America. However, that turns out to not be the most alluring thing in the entire scene; Leigh’s performance, even in the brief time she is in the film, is wonderful and so fascinatingly layered, in all honestly making us wish she was Oscar-nominated for her work in this over The Hateful Eight, and Lisa as a character is genuinely adorable, so it’s not difficult to see why someone like Michael would take an admittedly-questionable fancy towards her (to be fair, it may be even creepier if she were a much younger woman, but thankfully that doesn’t seem to be the case). She is the film’s true beating heart, one that will cause other hearts to break with her sincerity and insecurity, especially in a soothing rendition she does of Cyndi Lauper’s “Girls Just Want to Have Fun”.

An astonishing piece of work from someone who has proven time and time again that his bizarre view of the world has not been diminished, Anomalisa will not sit well with some of the more mainstream audiences, but for those open to new and surprising experiences, they can do no better than the film with stop-motion puppets having sex.

Anomalisa is a fascinatingly crafted film, shown in Charlie Kaufman’s signature bizarre and bizarrely layered style that is all over his script and direction, and through the impressive stop-motion animation which also features an incredible Jennifer Jason Leigh performance at its very heart.