Annette (Review) – Sparks Fly In This Absurd But Mesmerising Opera 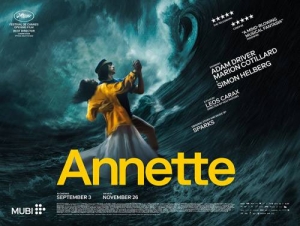 BASICALLY…: A stand-up comedian (Driver) and his opera singer wife (Cotillard) give birth to a girl with an extraordinary gift…

“So may we start?”, goes the opening number for director Leos Carax’s musical Annette, which serves as both a request to begin its wild story, and also a knowing plea from its central musical maestros. Ron and Russell Mael, known collectively as Sparks, have attempted on numerous occasions to bring their trademark eccentric brand of music to the big screen, trying and failing to collaborate with the likes of Jacques Tati and Tim Burton over the years (their progress was very recently documented in Edgar Wright’s Sparks-praising documentary The Sparks Brothers), and now that they’ve finally cracked the big screen – twice in the same year, in fact – there’s no better time for them to, well, start.

And start, it does. After the meta opening – in which not only director Leos Carax but also lead actors Adam Driver and Marion Cotillard appear as themselves, singing to the camera along with Ron and Russell – we learn the story of Annette starts with two star-crossed lovers, both from different shades of the entertainment industry. Driver is Henry McHenry, a shock stand-up comedian who delivers nihilistic gags in a dressing gown and boxers, while Cotillard is Ann Desfranoux, an opera singer on the cusp of stardom. Their whirlwind romance leads to marriage, and eventually the birth of their daughter, Annette – who is portrayed by a wooden marionette puppet. Not only that, but she is born with an extraordinary, but ultimately haunting, gift that shocks and enchants the world.

Right now, you’re probably confused by, or can’t stop laughing at, the pure absurdity of the premise and its key hook. Both are acceptable responses. That’s because Annette is a film that often defies convention, in ways that can sometimes be hard to describe. After all, how on Earth do you explain scenes of Adam Driver singing whilst performing oral sex on Marion Cotillard, or a wooden puppet child floating in mid-air while serenading sell-out audiences? You can’t. At least, not without actually seeing those images for yourself – which, incidentally, is what you should do anyway, if only to get in on such a vibrant and mesmerising experience.

Combining director Leos Carax’s vivid and absurd visual style, with Sparks’ characteristically barmy and dryly humorous lyrics, Annette is a near-perfect marriage of two eccentric parties coming together to form a confounding, but entirely fascinating, whole. It is a modern fairy tale, told in darkly satirical fashion through the guise of an epic opera, similar perhaps to the kind that Cotillard’s Ann may well indeed perform in at some stage. The film is almost entirely sung, with repetitive lyrics that drill the point straight into the audience’s minds (a central love ballad is simply titled “We Love Each Other So Much”, and guess what most of the song consists of), all with an other-worldly glaze that Carax – himself no stranger to delivering fantastical modern odysseys, with his previous feature Holy Motors dwarfing even this one in terms of bonkers, unpredictable imagery – is more than willing to compliment his and the Maels’ script with. Beyond the addition of marionette puppets standing in for child actors, Carax infuses the film with a heavily theatrical rhythm and pace, to a point where you could legitimately see how this could be adapted into an actual stage opera, in addition to being a visual masterwork on the screen.

The filmmaking itself is gorgeous, adopting an absurdist and surreal attitude that calls to mind the works of Terry Gilliam and David Lynch, but which Carax undoubtedly makes his own. The director’s experimentations with mood, sound, lighting and colour, along with cinematographer Caroline Champetier’s capturing of some dizzying imagery that incorporates ambitious tracking shots and abstract framing, are mostly successful in recreating a classical fairy tale tone, all the while incorporating modern themes from child exploitation to bitter male egos to even the #MeToo and Time’s Up movements. Sometimes, the theatricality of the execution threatens to make some of these themes feel indulgent and overwrought, but Carax is a smart enough filmmaker to know not to lean too heavily into things that do not ultimately matter to the direction this story is taking. Instead, he spices up the visual fantasy to make it a palatable feast for the eyes and the soul.

So, too, does Sparks’ music, which contributes a great deal to the film’s kooky, but ultimately sincere, personality. As repetitive as the lyrics may be – and, like the majority of songs by Sparks, Annette’s soundtrack is bound to divide listeners – there is weight to how they carry a distinctive story that would not survive under a more straightforward template, while also being entrancingly catchy numbers on their own. They are performed with gusto by the likes of Adam Driver and Marion Cotillard, who also deliver devious and intoxicating turns that frightfully turn this star-crossed romance into something uglier and much more sinister. As for Annette herself, she is a masterwork of puppetry (once you get over the slightly creepy design), controlled seamlessly by unseen – most likely green-screened out – puppeteers that work hard to convincingly portray a young child with all the typically curious tics of an infant struggling to grow up in this world. The Maels are also generous enough to reward the character with a climactic duel with some unexpected twists and heavily impressive vocal performances, as a token of goodwill for being a title character who is constantly overshadowed by her scheming and fragile parents.

It is definitely not a film that everyone will take pleasure in watching, for there will certainly be viewers that cannot grasp the oddball nature of this highly unconventional movie opera, but for those going in with more of an appetite for the weird and wonderful nature of both Leos Carax and Sparks, Annette is an experience you simply can’t wait to start.

Annette is an odd but mesmerising movie opera that combines the vivid surrealism of director Leos Carax’s visuals with the absurd musical stylings of Sparks, and makes for an utterly fascinating viewing and listening experience.

Annette is now showing in cinemas nationwide – click here to find a screening near you!

It will also be available to stream exclusively on MUBI from Friday 26th November 2021 – click here to get your free 7-day trial today with Amazon Prime Video!