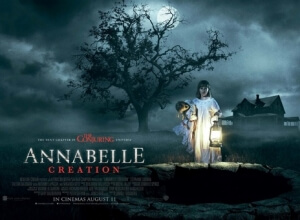 BASICALLY…: A young group of orphans move into a new home, where they are terrorised by the homeowner’s possessed doll known as Annabelle…

In October 2014, two horror films were released within weeks of each other, and neither would earn the love of critics and audiences – they were Ouija and Annabelle, which both earned their fair share of dismal reviews (7% and 29% on Rotten Tomatoes respectively) but still earned just about enough to justify at least another sequel.

As it would later transpire, rather fascinatingly, their eventual sequels would turn out to be not just wildly superior to their predecessors, but would also stand shockingly well on their own as legitimately effective horror movies. Last year’s Ouija: Origin of Evil certainly left an impression, and now so does Annabelle: Creation, which takes the Conjuring spin-off series to a whole new level of frights and creepiness whilst at all times being fantastically spooky entertainment.

This one is set some years before the events of the first Annabelle movie, where in a prologue we learn that a doll maker (Anthony LaPaglia) and his wife (Miranda Otto) suffer a horrific tragedy with their young daughter Annabelle (Samara Lee). Jump forward a few more years later, and the same couple have just opened their home to a small group of girl orphans and their caretaker Sister Charlotte (Stephanie Sigman), where one of them – polio-stricken Janis (Talitha Bateman) – comes across the infamous doll in a locked closet, and unwittingly unleashed the evil demon that possesses it on the rest of the house.

Though both are very different movies, Annabelle: Creation still manages to share a good many similarities with Ouija: Origin of Evil; for example, both are prequels that take place in a certain time period, both rely on atmospheric and tension-building shots to generate scares rather than just plain-old jump-scares (and even when they do use them, they’re way more effective than your standard horror film), and both also happen to feature young actress Lulu Wilson in a significant role, although in this one it’s a decidedly more heroic part than in Origin of Evil. However, the most vital similarity between the two is their individual hiring of much more competent horror filmmakers this time around; whereas with the Ouija sequel it was Oculus director Mike Flanagan, here it’s Lights Out helmer David F. Sandberg who, as he proved with last year’s sleeper genre hit, shows admirable restraint in his scares and relies more on old-fashioned techniques to get those chills running down our spines. Sandberg’s hiring automatically makes this a much more focused and intimate film than the previous Annabelle movie, which was just a bland copy of much better horror films, especially those by Conjuring director James Wan (who also produces this); the scares are much more effective, the characters are a lot warmer to connect to, and the cinematography – despite the fact that it doesn’t look that much like a James Wan movie, which the last one certainly did (probably because Wan’s regular cinematographer John R. Leonetti was directing that one) – is beautifully eerie.

It is a movie that completes its most basic task of frightening the audience to truly unnerved reactions, which it accomplishes through the several clever uses of darkness and how the Annabelle doll itself is shot. It is probably the scariest that doll has ever looked on the big screen, not least because it’s a creepy-looking doll anyway, and Sandberg uses some very effective lighting techniques and music cues to make that bug-eyed monstrosity a far more unnerving figure than ever before. The scares are made all the more terrifying and dread-inducing because the characters are actually ones that you get to care about, and you don’t really want anything bad to happen to any of them, so when things look that way it’s discomforting to say the least; and the acting from pretty much everyone is so strong that you feel every genuine scream and bodily shake as though they were your own. By the time the film starts to wrap itself up, you’re just sucked into this situation and feeling almost as fearful as those who are actually in the on-screen predicament, and when it actually does conclude – in a way that neatly ties it in to the previous film – you’re left as though you’ve been taken on this endlessly intense ride that somehow leaves you as though there’s more to experience (which, given this is a prequel, there is).

It doesn’t score many points for originality, since this set-up and a certain number of its scares are ones that should be a bit too familiar for fans of the horror movie genre, but Sandberg takes these concepts and manages to make it all seem a bit more fresh than it really should, and they are executed so well and generate a lot of genuine chills that you’ll easily forgive it for some of its shortcomings. Regardless, to say that this is a better Annabelle movie than the last one is an understatement, just like how Ouija: Origin of Evil was significantly more watchable than its own predecessor, and earns its place as the third-best in the Conjuring movie universe so far (it still can’t quite reach the heights of the first two Conjuring movies) – which, given that this was originally conceived as a follow-up to a spin-off that wasn’t very good in the first place, is a major achievement.

Annabelle: Creation hits far greater points than its bland predecessor, with effective scares, characters you really don’t want to see in harm’s way, and some genuinely creepy cinematography and direction by David F. Sandberg making it the second horror sequel after Ouija: Origin of Evil that’s in many ways better than the last one, and though it’s still not quite as wholesome as the first two Conjuring movies it’s still a welcome addition to the franchise.