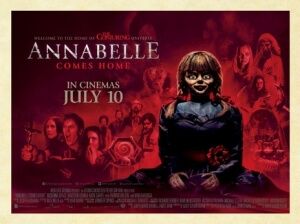 BASICALLY…: Whilst babysitting for Ed and Lorraine Warren’s (Wilson and Farmiga) young daughter Judy (Grace), a collection of spirits come to haunt two friends (Iseman and Sarife) courtesy of the evil doll Annabelle…

Annabelle, the creepy porcelain doll that serves as a conduit for evil spirits, has become the de facto mascot for the Conjuring Universe, similar to how Robert Downey Jr.’s Tony Stark became the face of the Marvel Cinematic Universe (although not quite as charming). However, her solo outings have only managed to conjure (pun intended) some rather mixed results – the first, from 2014 (a year after the debut of the first Conjuring movie), was a bland, uninteresting mess that remains the weakest of not just the Annabelle films but probably this whole franchise; the second, David F. Sandberg’s Annabelle: Creation, was a significant improvement over the first with good characters, an intense origin and some truly effective scares; and now we come to her third movie, Annabelle Comes Home – the directorial debut of Gary Dauberman, who wrote both previous Annabelle movies as well as fellow Conjuring spin-off The Nun – which is a fair in-between.

Neither great nor terrible, with things to admire about it as well as some dumb moments to point out, this fits in well between both Annabelle films prior as a decent, but not remarkable, new entry into this franchise.

Set somewhere between the first two Conjuring movies, we learn that young Judy Warren (Mckenna Grace, replacing Sterling Jerins who portrayed the character previously) is to be babysat by teenager Mary Ellen (Madison Iseman) while Judy’s parents, paranormal investigators Ed and Lorraine Warren (Patrick Wilson and Vera Farmiga) are away for the night. However, Mary Ellen’s friend Daniela (Katie Sarife) also shows up with a particular interest in the Warrens’ locked room that’s full of spiritual artefacts from previous investigations – including, of course, the Annabelle doll which is locked in a glass case under lock and key. Daniela soon manages to find her way into the room, and manages to release Annabelle from her case, setting into motion a night of horror as several spirits come to haunt Judy and her babysitters to seemingly no end, unless they can set things right.

The funny thing about this Annabelle movie is that Annabelle herself isn’t in it all that much; sure, she’s central to everything that’s going on, but the doll more or less takes a back seat while other evil spirits come into the spotlight for a bit of ghoulish fun, from the mythical Ferryman to a murderous bride to cursed samurai armour to even a monstrous hellhound – all of which would be fine if this was another Conjuring movie, but this is an Annabelle film and as such she really should be the biggest focus of her own spin-off. The other Annabelle films, whatever their quality, at least kept the doll as much in the spotlight as they could, whereas this feels less like an Annabelle movie and more of an audition reel for the next big Conjuring spin-off; don’t be so surprised if we get a Conjuring Universe movie soon about the Ferryman, or even the possessed Feeley Meeley game that’s also in this film. Because of the blatant pushing of all these other evil spirits, it’s easy to be taken out of the scares that this movie is trying to throw at you since you never get the feeling that this is entirely working as a standalone horror film, which is what it should have always strived to be instead of focusing on all the other franchise possibilities this series could offer.

However, when it isn’t forcibly trying to test out new material on its audience instead of actually being an Annabelle movie, the film does have a few notable qualities to it. For instance, the acting is solid; Mckenna Grace is a strong replacement for Sterling Jerins, and Madison Iseman is very likeable as one of the two babysitters roped into the horror, although Katie Sarife as Daniela is bound to be divisive as it is her rather reckless actions that kick-start this whole nightmare, although as the movie goes on we do learn a bit more about her past and why she would go so far as to snoop around the Warrens’ haunted artefacts room in the first place, so it’s not entirely for dumb reasons. However, some of the things her character does in the moment are so ill-advised that it often tends to negate her rather tragic backstory and just paints her as more of an idiot than the movie itself probably realises, despite Sarife’s performance here being good (once you no longer distracted by how she could pass as Aubrey Plaza’s younger sister). As for Patrick Wilson and Vera Farmiga as the Warrens themselves, they pretty much bookend the movie in what are a couple of extended cameos, but it’s always nice to see them on-screen in these films, no matter how brief.

Beyond that, some – but not all – of the scares and its use of night time cinematography are effective, showing that this was made by someone who clearly has an idea of what a Conjuring movie should be like, at least visually. It makes strong use of lighting in some scenes, like one with a nightlight that changes colour during rotation, and the constant darkness does add a welcome amount of tension as the night goes on; with the scares, most of them are jump-scares which can be hit-or-miss, but once in a while there will be a creepy image that does send chills down your spine, such as what they end up doing with said Feeley Meeley board game.

If they had just let this be a straightforward Annabelle movie instead of a glorified sizzle reel for future Conjuring instalments, perhaps I might have enjoyed it a little more, but even without that element it’s still just a middle-of-the-road Annabelle movie that’s neither better nor worse than what came before it.

Annabelle Comes Home is a serviceable new entry into both the Conjuring and Annabelle film series, but while it’s no better or worse than either of the previous two Annabelle movies, it ends up feeling more like an audition reel for future Conjuring instalments rather than its own standalone flick about the evil doll herself.

Check out Annabelle Comes Home showtimes in London
on Walloh.