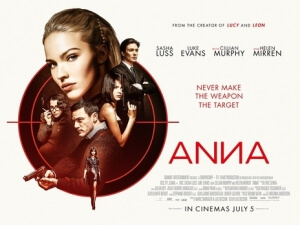 BASICALLY…: Russian model Anna (Luss) leads a double-life as a spy and assassin for the KGB…

Luc Besson has been through a bit of a rough spot lately, both professionally and personally. Not only have the last few films he’s made – among them sci-fi flop Valerian and the City of a Thousand Planets – failed to find success with critics and audiences, but the French filmmaker was last year also accused by several women, including actress Sand Van Roy, of rape and inappropriate behaviour. Even though those allegations were dropped by French authorities earlier this year, Besson’s name has become somewhat tainted in this post-#MeToo world, especially when such accusations have started to become more and more talked about in today’s culture.

His answer to all of this drama, it seems, is to just go back and make a visceral female-led action thriller like he’s been known for making, such as Nikita and more recently Lucy,  and hope that all of his problems blow over because of it. In short, it does and it doesn’t; while the movie just about functions as serviceable enough entertainment, it’s constantly reminding you of other movies like this, and not just ones by Besson, that have done this sort of plot much better in the past.

The Anna of the title is played by model Sasha Luss (who previously appeared in Besson’s Valerian and the City of a Thousand Planets), a beautiful young Russian woman who is talent-spotted in Moscow and brought to Paris to begin work as a model. As it turns out, however, the modelling is actually a front for Anna’s real profession: a ruthless spy and assassin for the KGB, under the watchful eye of fellow officer Alex (Luke Evans) and her handler Olga (Helen Mirren). The spy game, however, is not one that Anna wishes to play long-term, but when she finds out that there’s basically no way to get out of the business except for death, she starts putting plans into motion for an early retirement plan, which also involves the help of CIA agent Leonard (Cillian Murphy).

The “spy who no longer wants to be a spy so they do everything they can to stop being a spy” plot has been done so many times before, and Anna doesn’t offer much variety outside of its kinetic action style. Besson, whatever you may think of him, does have a way of directing action that keeps things engaging, energetic and very entertaining, often with a slick sense of humour that goes right along with its playful tone, and here it feels like he’s right at home in how he stages scenes and moves the camera to keep the audience up to date on everything that’s going on. There is a fight sequence in a restaurant – which is the centrepiece of the film’s trailer – which is especially well done, and if nothing else you have to admire the choreography and passionate camera work that went into making this scene, and the many others like it, work to a pleasing enough degree. In addition, the actors are more than game for sinking themselves into this world of action and suspense, with Sasha Luss proving to be much more capable as an action lead than some people might automatically assume, and although her character is largely one-note (more on that later) she does the best that she can in the part, and more often than not succeeds in doing so. Other actors like Luke Evans, Cillian Murphy and Helen Mirren are also clearly having fun, as they know exactly what is required out of their respective roles and don’t overdo themselves while delivering what Besson orders from them.

Where the film falls flat, though, is in its plotting. Beyond the fact that this kind of story isn’t especially fresh, and done better in other movies like Besson’s own Nikita, there’s not a whole lot going on that’s interesting enough to keep you invested, outside of the well-done action sequences. The story is pretty generic, and while the actors do fine enough jobs their characters are rather underdeveloped and not as fascinating as the movie thinks they are, with Anna herself flip-flopping from one side to the other so quickly it feels very unbelievable. It’s also the kind of movie that tends to jump across many points in time, when it really never needed to outside of a couple of necessary moments; it starts in 1985, then cuts to five years later, then to three years earlier, then back to three years later, then to six months earlier, and so on. It does this so much throughout the film that you start to expect that title card to drop every single time a major plot development happens, which softens the tension and overall impact within the scene itself because you know it’s coming, no matter how dramatic the event is. It also feels unnecessary, as you could easily put this movie in a more linear structure and still keep a track of what’s happening and under what context, instead of coming across as somewhat unfocused at times.

Again, though, what was really carrying this movie was the visceral and stylish nature of the action sequences, which is one thing that – no matter what your thoughts on Luc Besson may be – anyone can agree he does exceptionally well. Because they are so well done, I almost want to recommend seeing this film just for those scenes alone, but unfortunately the film is lacking in most of the other departments so I would only say to check this out on Netflix or whichever streaming service it ends up on. If you’re a Besson completionist, then by all means seek it out; for everyone else, you can either take it or leave it.

Anna is serviceable but largely forgettable action entertainment from director Luc Besson, whose visceral and stylish action sequences easily carry the film, but not enough for it to overcome its generic plot and thin characters which don’t put it any higher than an okay movie to find one evening on streaming services.

Check out Anna showtimes in London
on Walloh.