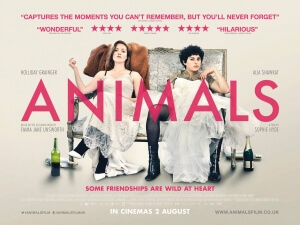 BASICALLY…: Best friends Laura (Grainger) and Tyler (Shawkat) find their relationship strained when one of them falls in love…

Although the number of female-led films is steadily rising in the industry, we still have a problem when it comes to discussing the “likability” of female characters in modern cinema. It’s a double standard, as we seem to have no problem when a male character is doing and saying things that are mean and hurtful, but when it’s a woman doing those things, suddenly everyone loses their damn minds and declares the film a failure because of the unspeakable notion that – gasp! – women can be just as  morally questionable as men.

Those people are going to flip when they see Animals, a movie that doesn’t hold back from showing the persistent flaws in its two central female characters, as they continue to make one poor life choice after another, yet their three-dimensional humanity shines through and they end up feeling relatable to every single person who goes to see it, regardless of their gender. It’s a movie that’s perfect for our forward-thinking times, and a living hell for anyone who can’t stand the idea of women having more dimensions to their character, in which case they can wander back to their caves where they came from.

Based on the acclaimed novel by Emma Jane Unsworth – who also provides the screenplay – Animals is set in Dublin (different to the novel’s original setting in Unsworth’s hometown of Manchester) where best friends Laura (Holliday Grainger) and Tyler (Alia Shawkat) spend their time together drinking, partaking in drugs and sex, and generally slacking about. Laura, a struggling writer, begins to grow weary of her lifestyle choices when she meets and falls for handsome musician Jim (Fra Fre), while Tyler – an American expat who has a patchy (and vague) relationship with her family – is not as keen to leave her partying ways behind as Laura is, so naturally a divide begins to form between the two as their individual ideas of living start to clash with each other.

I hate to compare this movie to another, more male-centric movie because I really do feel it should stand on its own without being paired next to something starring members of the opposite sex, but for me it was hard to watch this movie and not think about how it shares a lot of similarities with Withnail and I. Both movies are about meandering, and some would argue toxic, friendships between two people stuck at a crossroads in their life, and who rely on rather destructive lifestyle choices to help them get through life; Animals, though, is unique in that it actually takes the time to explore how its lead characters’ actions gravely affect the people closest in their life, with Laura’s sister especially bemoaning her older sibling’s constant drunken state, leading to a very embarrassing incident involving the sister’s newborn baby, and Tyler’s lack of a relationship with her own family leaving her unable to connect with others without the influence of alcohol or other substances. You feel that both of these women could do so much better if they simply cut each other out of their lives, and in doing so they would not only improve their own lives but the relationships with those around them, but their chemistry is so palpable that you realise that they wouldn’t survive one week without one another, leaving everyone else to pick up their mess. It’s quite heartbreaking when you really think about it, and it’s especially so as you watch these two friends dig themselves into deeper and deeper holes because of their inability to actually take on new responsibilities, with increasingly few opportunities to actually climb back out of them. In that sense, it feels like a much more separate companion piece to Withnail and I, one that takes a more post-modern look at this sort of relationship rather than simply showing their bohemian lifestyle with little regards to the consequences.

As mentioned before, Unsworth adapts her book into a screenplay, and although I have not read said book it is striking to even those who haven’t how vibrant, natural and provocative the writing is here, as you understand more and more about where these characters are coming from even as you see them get into one miserable scrape after another, and the dialogue feels alarmingly real which, through a healthy combination of director Sophie Hyde’s straightforward mechanisms and the winning duo of lead actresses they’ve found in both Holliday Grainger and Alia Shawkat, is delivered with raw passion that helps bring these people and their world to life. It’s a movie that isn’t just afraid to touch upon some of the darker elements of these characters’ lives, but to also make them feel like real, functioning people that aren’t simply a pair of drunken screw-ups that you’ve seen many times before, but more like a couple of well-rounded characters you can sympathise with or feel a sense of dismay whenever they mess up big time. The writing, direction and the acting all convey these hardships, and they do so in very surprising, even timely, ways.

Going back to that dreaded “likability” debate, Animals is solid proof that you can have female leads who don’t always do the right thing, and sometimes do or say certain things that would immediately put anyone off of them, because that way they can become more interesting, complex and challenging to audiences who might want something different to what they’re normally fed. So, who cares if the women aren’t exactly nice or sensible, when they’re at least fascinating to watch in a film that just about matches their level of dramatic intrigue?

Animals dives deep into the ins and outs of its central friendship in fascinating, complex and even dark ways that makes it stand out as an interesting take on the “drunken duo” format, with solid writing, direction and acting elevating things to a higher plane of existence without sacrificing anything to make the characters more “likeable”.

Check out Animals showtimes in London
via