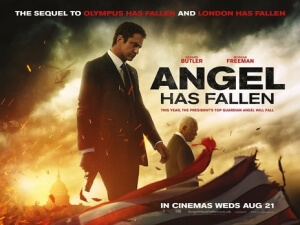 BASICALLY…: Secret Service agent Mike Banning (Butler) is forced to go on the run when he is accused of being behind an assassination attempt on the President (Freeman)…

I’m not entirely sure how to label this particular trilogy of movies – is it the “Fallen” trilogy? The “Has Fallen” trilogy? The “Gerard Butler seems to be the unluckiest Secret Service agent in history” trilogy? – but whatever you call it, there are now three films that have come out of the original premise of Olympus Has Fallen, including the Blighty-set sequel London Has Fallen – which I remember having such a negative attitude towards Muslims that it was moments away from having Donald Trump showing up to approve this campaign ad – and now Angel Has Fallen.

Angel is different to both Olympus and London, in the sense that whereas the first two were clearly trying to be the next Die Hard, this one is definitely attempting to be the next Taken 3. Now, this movie is not as ineptly made as THAT movie, but similar plot aside it is also the first time this series has taken itself in a slightly new direction – and is by far the least memorable of the bunch because of it.

The movie starts out as our action hero Mike Banning (Gerard Butler), the Secret Service agent working for the President (Morgan Freeman, reprising his role from the previous films as Aaron Eckhart’s former Vice-President; as for Eckhart, not only is he not in this, but he’s barely mentioned despite being a major character in the last two films), is being lined up for a promotion. However, during a fishing trip, the President is attacked by a flock of drones, which kill all of Banning’s team and leaves the President in a coma. Banning later discovers that he is being framed for the assassination attempt and is forced to go on the run, avoiding the FBI and all law enforcement while trying to discover who’s really behind the attacks so he can clear his name.

The whole “action hero is framed for a crime they didn’t commit and must go on the run” plotline is one of the many clichés this movie likes to use, after previously being used in so many films like The Fugitive, North by Northwest and, yes, Taken 3 – in fact, one of the movie’s co-writers, Robert Mark Kamen, actually wrote the script for Taken 3; I guess he wanted to have a second chance with this old and stale plotline by inserting it into the third part of another ongoing action series – and it plays out exactly as you’d expect, with very few alterations. That not only makes it very predictable, with everything from the action to the identity of the villains being very easy to figure out, but also pretty dull to watch; the other two films, for all their faults, had enough crazy and over-the-top qualities to at least make them entertainingly mediocre, which this film seems to lack or not do as often. It’s just an action movie that goes through the usual motions, and not much else, and it’s not exciting enough for you to actually care about any of it.

It’s made clear early on that this entry of the series is trying to be more character-focused, with Gerard Butler’s Mike Banning going on a much more personal journey amidst all the explosions and carnage, but while the notion is admirable for an action series such as this, it doesn’t really work because the writing isn’t strong enough to carry a more dramatic story such as this, and also there’s the fact that Banning just isn’t that interesting of a character. When you look at other action heroes like John McClane or Indiana Jones, you actually want to know more about them because they’re both written and acted so well that you become much more curious to dive deeper into their characters; not once throughout these movies has the character of Mike Banning seemed deeper than the cheesy profane-fuelled one-liners he spouts out at his (mostly) foreign enemies, and Butler’s choppy American accent is about as convincing as a Rottweiler trying to pass itself off as an American Bald Eagle, so any efforts to make this character seem more complex than he really is fall flat because they’re not warranted.

The action is so-so, with a lot of it taking place in the woods at night time which can sometimes make it hard to see, and often filmed whilst the camera operator is apparently having a seizure. The best of it, though, comes from a segment where Butler’s Banning visits his estranged father, played by Nick Nolte, who now lives as a reclusive hermit; when he shows up, the movie actually works because Nolte delivers a very strong emotional performance – probably because nobody told him what kind of movie he was acting in – and he commands an action sequence that’s not only cool to watch but actually rather funny. Nolte definitely has more to do in this film than Morgan Freeman, who spends the majority of this film lying comatose in a hospital bed, despite second-billing on the posters, in what has to be one of the easiest paychecks that the actor has received in his later career. The movie stumbles a lot more, however, whenever Nolte isn’t on-screen, and since he is the only one of the thespian actors in this film to actually try and give a good performance, you miss him a hell of a lot more – he is so good in this, it’s almost enough to make me forgive him for Head Full of Honey… almost.

But not even the presence of Nick Nolte can’t save this film from being wildly mediocre, and like the other films will easily be forgotten shortly after seeing it, a fate you could argue is worse than being completely awful.

Angel Has Fallen is the least over-the-top, and therefore the most forgettable, of this action trilogy, which earns points for trying to go in a more character-based direction as well as for the presence of Nick Nolte, but can’t escape a stale plot, so-so action and a bland lead character that make this a rather dull trilogy-closer.

Want to decide what the movie’s like for yourself?
Check out Angel Has Fallen showtimes in London
via