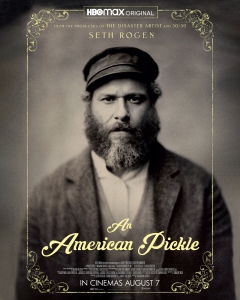 BASICALLY…: After falling into a vat of pickles in 1919, Herschel Greenbaum (Rogen) is brined for 100 years, and re-emerges in the modern era…

Whether or not it’s the stoner in him, Seth Rogen appears to be attracted to bizarre film ideas which, even more strangely, just about work, despite themselves. A buddy comedy set during the apocalypse? Sure. A raunchy animated film with talking food? Why not? A road trip comedy with Barbara Streisand as his mum? Okay, maybe that one’s going a little too far, but you get my point – the weirder the concept, the more chance it has of actually working if Rogen can breathe some life into it.

In the case of An American Pickle, it’s perhaps one of the strangest ideas for a film he’s been involved in recently, but once again he’s managed to work that mysterious good-luck charm of his and turn what could have been a completely ridiculous mess into something that’s mindful, satirical, and surprisingly heartfelt, despite its evident silliness.

The film starts in 1919, when Eastern European labourer Herschel Greenbaum (Rogen) moves to New York with his new wife Sarah (Sarah Snook) in the hopes of building a better life for his family. He gets a job at a pickle factory, but one day he accidentally falls into a vat of pickles and ends up being brined for the next hundred years. Emerging in 2019, Herschel is reunited with his only living relative, app developer Ben (also Rogen), and begins to experience the vastly different world of the future through his own eyes, which soon puts him at odds with Ben, igniting a war of wits between the two relatives as Herschel begins finding his own successes while Ben remains stuck in development hell.

Needless to say, this is a very odd concept to get your head around, and at times the film acknowledges the silliness of it all – a scientific explanation of how Herschel was able to be brined for 100 years is humorously laid over by Rogen’s narration – but the film quickly gets its head into gear as the film reveals a hidden desire to spoof a number of modern-day societal norms, from the unlikely perspective of a hundred-plus year-old time-travelling immigrant. A lot of things from artisanal vendors, to cancel culture, to broad politics centred around unfiltered and often offensive opinions, are all targets for writer Simon Rich (who based the script on his own short story entitled “Sell Out”), and while the overall intended humour doesn’t land as gently or as covertly as it would perhaps like, you can tell that this was written by someone who clearly has a lot to say about most of these things. Rich’s script lays the satire on heavy, sometimes to an almost unbearable degree, but what he lacks in subtlety he makes up for with genuinely heartfelt moments, the majority of them shared between the two Rogens as they swap tender (and literal) snapshots from history, and learn to respect each other’s culture and religious beliefs.

The film is a solid showcase for Rogen, who manages to find some true humanity and empathy within the two wildly different characters he is playing at the same time. As Herschel, he easily inhabits the good-intentioned ambition his character carries with him from the past to the present in ways where you both support his cause and also err on the side of caution due to some of his outdated philosophies; and as Ben, he just as effortlessly captures the frustrations of a young entrepreneur struggling to find his own way in the world. Rogen injects a real sense of depth that prevents either character from being two-dimensional stereotypes, and it is a testament to the actor’s rarely-flexed dramatic muscles that he makes you feel genuine sympathy for both of them, even when they end up doing morally questionable things later on in the film. Admittedly, the effect of having two Rogens in the same scene doesn’t always work, and you can tell which one is the stand-in when they’re angled just to the left or right of the camera in certain shots – if the high standard for this practise is, say, Tom Hardy in Legend, then this is noticeably leagues beneath how they pulled that particular effect off. However, the strength of Rogen’s dual performances is enough to at least get you invested in these characters, whether they are actually in the same room as each other or not.

It isn’t one of the funnier films that Rogen has been involved in lately, as a number of gags don’t always land and, again, some of the satirical elements can be a little on-the-nose, and director Brandon Trost – a cinematographer on some of Rogen’s previous films, and who makes his directorial debut here – makes a noble effort on his first go but clearly has a way to go before he can truly nail a film’s pacing and tone, among a select few other technical accomplishments. However, the earnestness of the story, as well as Rogen’s strong and likeable dual performance, is enough to label this one yet another odd experiment from Rogen’s camp that just about holds itself together.

If he and his production company Point Grey can just about pull off a story about a time-travelling immigrant via a pickle vat, then who knows what they could do with that recently-announced Teenage Mutant Ninja Turtles reboot – mark my words, we are in for some really freaky stuff with Michelangelo and the gang.

An American Pickle is a fallible but likeable comedy-drama that is preserved by a heartfelt story by writer Simon Rich and a strong dual performance from Seth Rogen, both of which are enough to just about forgive its heavy-handed satirical approach and a couple of distracting effects that don’t always convince you of there being two Rogens in the same scene.

Want to decide what the movie’s like for yourself?
Check out An American Pickle showtimes in London
via