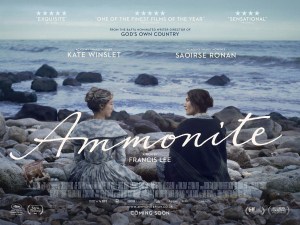 This review is of the cut shown at the BFI London Film Festival in October 2020 – the UK release date is currently unknown.

We’ve come to the end of a very different BFI London Film Festival, one that has taken a lot of liberties in the socially-distanced environment of 2020 and heavily favoured an online presence in addition to a limited amount of cinema screenings. That’s all well and good, especially since it ensures some of its more niche titles get seen by much wider audiences, but hopefully the format returns to its more star-studded and expansive self for next year’s event, which for obvious reasons has been sorely lacking this year in the glitz and glamour that the capital’s premier film event usually brings.

None of that has to really do with my thoughts on Francis Lee’s Ammonite, which serves as the official Closing Film for this year’s festival, but there is a slight sense of poetic harmony on ending a stripped-back festival with a film that itself feels stripped-back, with some early critics being quick to point out how cold and unpassionate it feels. Personally, though, I found this film to be a very impressive sophomore outing for Lee – whose debut feature God’s Own Country was among my favourite films of that year – where the cold reservedness felt very much like the point Lee was trying to make here, in that something truly profound and emotional can come from the most distanced and seemingly passionless places.

Lee’s film centres around Dr. Mary Anning (Kate Winslet), a renowned but overlooked palaeontologist living in the quiet Dorset seaside town of Lyme Regis, sometime during the 19th century. Anning lives an anti-social existence, with only her sickly mother (Gemma Jones) for company, but that changes when enthusiastic Roderick Murchison (James McArdle) bursts through her shop door hoping to work alongside her, with his meek wife Charlotte (Saoirse Ronan) silently at his side. When Roderick has to leave on urgent business, he entrusts Mary to take Charlotte – who is in a state of depression after clearly going through an undisclosed tragedy involving her infant (though there is enough for the audience to put the pieces together) – out with her whilst hunting for fossils, which Mary reluctantly agrees to when she is guaranteed extra pay. Despite her initial coldness towards her melancholic young charge, Mary soon finds herself warming to her infectious spirit, and soon the two women engage in a passionate and tender affair with one another.

The approach that Lee has taken is less of a straightforward biopic about these real people (in reality, though, Mary Anning’s romantic affairs were never disclosed, leading to a lot of liberties being taken in the script here), and more of an intimate story about two very different people with varying levels of emotion – in Charlotte’s case, there’s perhaps too much of it; in Mary’s case, there’s not enough – who against all odds find comfort and passion in each other, eventually shedding away their steely exteriors to fully embrace who they really are. On the surface, it can definitely feel cold and distanced to some, and I understand why some critics have leapt to that conclusion, but buried underneath it I found there to be a very profound and fascinatingly complex study of British reservedness in the 19th century, which a much-needed queerness helps to erode away when all formalities are pushed out of the mind. Lee’s script and direction, as they were with God’s Own Country, is a quietly engaging mixture that leans into the sensibilities that women of the time were expected to adhere to, while twisting those expectations with something that is strikingly post-modern; although it was historically unacceptable at the time, the lead characters’ sexuality is never addressed or condemned by anyone else, and the romance itself is allowed to blossom at its own pace without anything but societal norms standing in their way. It leaves you with a compelling and deeply emotional state of affairs, one which I am concerned is being overlooked by critics of this film who can’t look past its intentionally steely exterior.

Both of the film’s leads also help to drive the passion to wildly passionate gears; Kate Winslet and Saoirse Ronan, both fantastic actresses in their own right, deliver some truly profound work here, displaying varied levels of vulnerability and deeply layered emotion with exceptional ease. Winslet, in perhaps her strongest turn in years, is admirably stoic as Mary Anning, a woman compelled by interests that the outside world is not as eager to reward her for (her discoveries, despite being displayed in high-profile London museums, are largely buried by male-dominated exhibitors), while Ronan is magnificent as Charlotte who, despite her evident melancholy, displays a beautiful soul that’s nonetheless filled with optimism and sweet energy. Both share an at-first uneasy but ultimately rewarding chemistry, resulting in love scenes that leave the blood pumping long after the fact; racy for some, but beautifully passionate for everyone else.

It’s a lovely film that needs a good amount of patience to get through, but the pay-off is wondrous, and firmly establishes Francis Lee as a strong filmmaking voice in queer cinema who can deliver a compelling, highly engaging love story for a modern and wholly accepting audience that can easily discover its passion lying underneath the rock-hard surface.

Ammonite is a wondrous sophomore outing for writer-director Francis Lee, who tells the story of the passionate relationship between Mary Anning and Charlotte Murchsion with tender love and care, along with two fantastic lead performances from Kate Winslet and Saoirse Ronan which also help to underline the core intimacy underneath its surface.