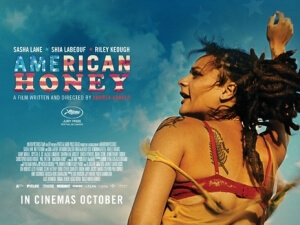 BASICALLY…: A teenage girl named Star (Lane) joins a group of travelling magazine salespeople, and gets caught up in the wild partying methods of her fellow misfits…

If Ken Loach were to pass away tomorrow (though given 2016’s horrific track record of high profile deaths, PLEASE don’t let that be the case!), then Andrea Arnold would be a worthy successor. The Academy Award-winning filmmaker, who won in 205 for her short film Wasp, has managed to gain a solid reputation for her unconventional approach to making grounded visions of harsh realities, which includes hiring unknown actors from the street instead of casting agents, shooting with a script that builds as the film goes on, and incorporating a naturalistic feel amongst the on-screen participants instead of sounding like it all came from a script, all shot within a tight 4:3 aspect ratio instead of widescreen or other formats.

So far, and rightfully so, it has worked out for her with home-grown hits like Red Road, Fish Tank and her 2011 adaptation of Wuthering Heights, but now she has taken her expertise across the pond for her first purely American-set feature, not coincidentally titled American Honey after the country song by Lady Antebellum of the same name (said song even plays at one point in the movie), and it’s an epic odyssey of youthful ambition and the eternal desire to escape from a life not worth pursuing. In other words, it’s pretty good.

Very simply, we follow Oklahoma teenager Star (newcomer Sasha Lane) who one day encounters a ragtag team of young magazine salespeople, led by a woman named Krystal (Riley Keough) and her charismatic beau Jake (Shia LaBeouf), and decides to join them on a journey across the southern states as they go door to door trying to sell subscriptions, whilst maintaining a wild party lifestyle. Along the way, Star learns what it is to belong in a group of outsiders, but more importantly what it is to branch out as her own unique self.

That’s about it in terms of an actual plot, and like with Arnold’s previous films it meanders at its own pace with only a basic template and simple yet identifiable characters to keep it going. Even so, American Honey is a pretty long sit, clocking in at nearly three hours without so much as an opportunity for a bathroom break, because you risk missing what could happen in this wildly unpredictable and wholly engrossing film. There are rarely times when you’re checking your watch to see how much time has passed, because you’re strangely intrigued by where this journey is headed, and more importantly how it’s going to get there. You’re right there with Star as she sees the world through these outcasts’ eyes for the first time, and also as she herself begins to get sucked into the hard-partying lifestyle they have created for themselves. The film is intended to feel as though you’re along for the ride on an extravagant trip across the country with your friends, but whether or not you actually like these people you’re with is entirely up to you; Arnold quite ingeniously doesn’t give us any indication that these are terrible people, rather a group of youths who have decided on an alternate lifestyle than what is expected of them. Through her forceful eye for detail, cinematographer Robbie Ryan’s box ratio camera work, and a vibrant soundtrack of hip-hop and R&B tracks, Arnold has made a film about a completely different perspective of the American dream, one that is fresh as well as all too relevant in a politically-troubled America right now.

Arnold’s unconventional casting methods have landed her with a mostly unknown cast that have such naturalistic talent that you’d swear that they’d been acting for years prior to this. Lane is a tremendous find, grasping the feistiness and raw outspokenness of her character with an iron fist, unafraid to go certain distances even as a genuine newcomer (this is her first film role, after being spotted by Arnold whilst celebrating spring break). Should she be willing to carry on with acting in the future, unlike previous Arnold leads like Fish Tank’s Katie Jarvis who has all but disappeared from the circuit, then this will be an attention-grabbing debut if there ever was one. Meanwhile, of the small number of more professional actors in the film, this is a minor comeback role for Shia LaBeouf, who after a troubled few years is finally back to showing the world that he’s far more than the guy from the first three Transformers movies, and he is genuinely excellent as the morally ambiguous man who seduces Lane’s Star into this new life. He also participates in not one but two of the year’s most exhilarating sex scenes, which are framed and performed so realistically and convincingly that you’d swear he and his on-screen partner were actually bumping uglies right there on set (then again, this is Shia LaBeouf I’m talking about, so I’m not going to rule anything out as a possibility…).

Everything sweeps by at a brisk pace, giving us set piece after set piece that couldn’t be more different if they tried, like a first failed attempt to sell subscriptions to a Christian mother with a spoiled daughter, to mingling with a trio of Stetson-wearing freelancers, to accompanying a truck driver on a spontaneous trip down the road. American Honey is a film about taking chances, and embracing opportunities that are presented right in front of you, and Arnold has delivered a powerful and exhilarating trip across Americana that will stay with you long after you leave the auditorium. But you might want to bring a cushion with you, because it’s a long one.

American Honey invites the audience on a wild and exhilarating odyssey across America in this electrifying and wholly engrossing epic, which although rather long at nearly three hours never outstays its welcome, and introduces us to a reformed and never-been-better Shia LaBeouf and fantastic new find Sasha Lane.