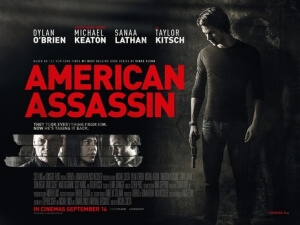 With Bond on a break, Jason Bourne on hiatus, and the long-discussed 24 movie not at all happening now, you can tell that there is a certain desperation from producer Lorenzo di Bonaventura, the man behind all five Transformers movies and also a few good ones like Deepwater Horizon and Side Effects, to force a new spy thriller franchise onto the world to mercilessly fill that gap.

His work is now done, with him producing director Michael Cuesta’s American Assassin, which plants the seeds for its own long-running film series so hard that even The Mummy is telling it to tone it down with the universe-building. Not only that, but if this is indeed meant to be the start of a brand-new movie franchise, then they’re off to a pretty rocky start as this is a rather bland and needlessly grim action thriller that doesn’t offer a lot of potential for a long-term stay in audiences’ memories.

The main character is Mitch Rapp (Dylan O’Brien), who after being orphaned at an early age and then, in an opening scene that tastelessly calls back to the Tunisia beach shootings a couple of years ago, losing his fiancé in a terrorist attack, decides to take on the bad guys single-handedly. Before he is able to actually exact his revenge after somehow working his way into their good books (again, completely single-handedly), the CIA intervenes and offers him a chance to work for them, sending him to Michael Keaton’s war veteran Stan Hurley to be properly trained. His first major assignment is a big one; to stop a rogue operative known as “Ghost” (Taylor Kitsch) from building and detonating a nuclear weapon that could kill millions.

That last sentence, by the way, kills any pretention this movie has about being a grounded and gritty spy thriller, because just when you think it’s settling in to something more along the lines of Jason Bourne, the far higher stakes and heavy lenience on action make it seem much more like a Bond film, specifically some of the later Roger Moore or Pierce Brosnan ones. Yet, the movie is so utterly convinced that it has its feet stuck firmly to the ground, raising the intensity and levels of sadistic violence to a hilariously po-faced level, even in scenes that are completely ludicrous and make little sense. Like, how bad must the CIA be at their job if they are beaten to finding and successfully locating a known terrorist cell in Libya by a complete amateur, and even more so that at no point during his eighteen month crusade do they step in to help, instead coming in at the last minute and ruining his entire revenge plot before he can even act? And also, if this “Ghost” figure is a former operative gone rogue and trying to do his evil bidding in the shadows, how come he’s dumb enough to have his face shown on security cameras without even bothering to hide his identity to the world? And why, in all that is holy, has this movie been given an 18 certificate when it is so clearly designed for fifteen year olds to watch, yet the adult rating completely locks out this movie’s target audience from even seeing it?

The reason for that is probably because the BBFC were concerned that the “strong sadistic and bloody violence” they list in their official certification that this movie contains would be too much for any teenager to handle. In reality, the problem isn’t that the violence isn’t overly graphic, because there’s much more gruesome things out there in cinemas right now (hell, in It – a 15-certficate film, by the way – the opening scene is of a scary clown literally biting a young child’s arm off, and said child crawling through a puddle of their own blood), but that it’s way too unpleasant and far too sadistic to even be entertained by. Sure, sadism is certainly the point in some parts – a torture scene sees a character’s fingernails be pulled off, and is then electrocuted while being hung up by a chain – but in others, the constant head-shots and broken arms (some causing CGI blood to splatter the screen like it’s a slasher film) are way too overdone, and they reveal a darker and meaner streak at its heart, which the film disguises with testosterone-laden machismo and dodgy camerawork that fails to capture the action-packed feeling it’s clearly going for.

It’s trying to be lots of things that it’s so obviously not even close to being, from a straightforward espionage thriller to a blood-soaked action rollercoaster, complete with a CG-overloaded finale that really brings out its clear desire to be the next Bond or Bourne, but failing miserably due to its disturbing lack of fun. If it stuck to what it probably should have been, something more along the lines of Homeland or Zero Dark Thirty, then they might have been onto something; but unfortunately, it’s never certain about what it wants to be, and distracts you about its lack of identity with big manly car chases and explosions and a lead who looks more like he’s ready to down some Bud Light before he binge-watches Entourage rather than a credible action hero. At least Michael Keaton has an idea of what this movie should have been aiming for, with an expectedly gruff and slightly on-the-nose performance; it’s a shame the rest of the movie couldn’t figure it out as quickly as he did.

American Assassin is an unappealing slog that clearly wants to fill the void left by James Bond, Jason Bourne et al, but lacks any of the entertainment factors that made them credible to begin with, and disguises its clear lack of solid identity with thin testosterone-drenched manliness and a sadistic streak of unpleasant and nasty violence.