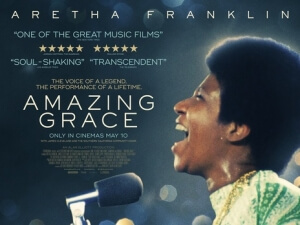 When soul legend Aretha Franklin passed away last year at the age of 76, the music world rightfully mourned. But for the few who had kept track of the long-delayed documentary showing the live recording of her gospel album Amazing Grace, it was surely a bittersweet sigh of relief, as it marked the end of a decades-long battle to keep it from ever reaching the screen.

The film was shot by director Sydney Pollack over two nights at the New Temple Missionary Baptist Church in Los Angeles in early 1972, when Franklin recorded said gospel album in front of a live audience, with the assistance of Reverend James Cleveland as well as the Southern California Community Choir. However, due to synchronising problems with the footage, Warner Bros – who had originally commissioned the documentary – was forced to shelve its planned release alongside screenings of the studio’s Super Fly, and promptly placed it in their vaults. It wasn’t until after Pollack’s death in 2008 that the movie was finally finished thanks to producer Alan Elliott, and in 2011 it seemed like it would debut at last – but then Franklin herself sued Elliott over using her likeness without permission, and the film ended up being delayed; however, when Franklin’s original contract with Warner Bros suddenly showed up that basically declared that the studio, and not Franklin herself, had full rights to the footage, the lawsuit was dropped… only for ANOTHER lawsuit to emerge from Franklin that prevented its planned debut on the 2016 film festival circuit, although it’s apparently unclear why she didn’t want anyone to see the film since she was quoted to have not only seen it, but rated it highly.

So only now, less than a year after Franklin’s passing, has her estate at long last given permission for the documentary to be released – and given how fascinating its story about the journey to the big screen is, it’d be understandable if you’d be somewhat disappointed that the movie isn’t as insightful or as revolutionary as it had perhaps been unfairly built up to be. However, for lovers of Aretha Franklin’s music, the soulful energy of gospel music, or even just music in general, it’s a powerful treat that’s well worth the wait.

As mentioned earlier, this is primarily just a filmed version of Franklin’s live recording for her Amazing Grace album; the movie never gets into any detail about her life story, it doesn’t track her career from one chart-topper to the next, nor does it even feature any interview soundbites from other people talking about the event in question; it just shows Aretha Franklin doing what she was born to do, and that is sing her precious heart out with that absolutely astonishing voice of hers. It is more or less a concert movie, outside of a few opening texts that fill audiences in on the backstory leading up to this event that we’re about to witness, but it is also a monumental moment in the singer’s life being unfolded right before our eyes; this album she is recording would – spoiler alert! – go on to become not just the most successful gospel album of all time, but also the biggest selling record of Franklin’s entire career, so this is pure history being captured on film here, especially for the biggest lovers of her music. Hearing her belt out one holy hymn after another, with those incredible vocals and that no-nonsense attitude, is an extraordinary display of passion and swagger that should make us all feel ever more sad that such talent is no longer with us.

The film has some undeniably questionable filmmaking qualities, which could very well have been a major reason why Franklin didn’t want this movie to be seen by the public; there are shots that constantly go in and out of focus, the lighting isn’t very good, crew members are seen wandering all over the place, and that’s not even touching upon many of its other faults. Aesthetically, it’s flawed; however, there is a slight charm to its haphazard nature, because it makes things feel all the more like you are actually there in the room watching Aretha Franklin perform these songs, with everything happening as though they’re in your peripherals while your focus is always on the singer. It’s a unique experience, as usually with these types of films there is a certain separation between what is happening on the stage and what everyone is doing behind the scenes to ensure the viewing experience is as swift and tidy as possible, whereas here it’s all on-screen at the same time with Sydney Pollack instructing his camera crew whilst Franklin belts out yet another show-stopper of a gospel tune. It’s admirable how, instead of cleaning this footage up and presenting it as seamlessly as possible, Elliott has decided to just show it in all its glory, because that’s probably what his late friend Pollack would have wanted, and even though she initially tried to prevent it from being seen I have a sneaking suspicion that even Aretha Franklin would have wanted to have the bare bones of this footage untampered with – after all, her voice always seemed to come from the most natural of places, so it only makes sense that this special piece of celluloid remain intact as well.

Don’t go in expecting to find out anything revelatory about the life of this singer, because you won’t find it here. What you will find, however, is a fresh, natural and extraordinarily powerful example of the late singer in her element, not to mention a firm reminder of the raw and passionate amount of talent she exhibited wherever a microphone was in front of her, the kind of which we will rarely ever see again.

Amazing Grace is a passionate and admirably raw collection of footage that sees the late singer record her famous gospel album with pure strength and – what else? – grace, with even the aesthetically flawed filmmaking lending its own charms to the viewing experience.

Check out Amazing Grace showtimes in London
on Walloh.