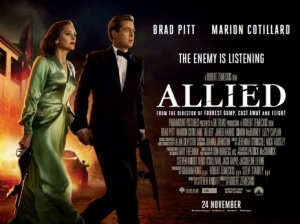 BASICALLY…: A pair of wartime resistance fighters (Pitt and Cotillard) meet and fall in love, only to be threatened when one of them is accused of being a German spy…

The unofficial “Brad Pitt fights Nazis” trilogy is now complete, with Robert Zemeckis’ Allied now joining the list of films like Inglourious Basterds and Fury wherein he kills at least one on-screen member of the Third Reich in an awesome display of intense, often violent confrontation.

However, the Nazi-killing is limited to only a couple of scenes in the movie, which is otherwise pitched as a wartime romance-cum-spy thriller, in the style of the classic movie epics from the latter half of the 20th century. Given recent reports, it’s unlikely that Brad Pitt is really in the mood for anything romantic right now, but anyone other than him will probably find it to be a wholly competent, though not great, flick to check out.

The movie starts off in 1942 French Morocco, where Canadian intelligence officer Max Vatan (Pitt) is parachuted in to pose as the Parisian husband of a woman named Marianne (Marion Cotillard), who is an undercover French Resistance fighter on an assassination mission. Over a short amount of time, they develop actual feelings for each other, and shortly afterwards they relocate to London, get married and start a family. However, their relationship is tested when Max learns that his wife is being investigated for possibly being a German double agent, and the rest of the film is of Max piecing together whatever clues he can gather to prove to himself that the accusation is false.

Written by Steven Knight, the creator of Peaky Blinders as well as having several other screenwriting credits, Allied doesn’t start off with the most promising notions. Zemeckis paces things very slowly, with scenes often being longer than they need to be and plot points that just seem to come almost out of nowhere, with the extended opening third of the film – taking place in Casablanca during the mission itself – being particularly guilty of these things. Take the opening scene as an example, which shows Pitt being parachuted into the desert and being picked up in a car; there seems to be a desire on the director and editor’s part to show the audience almost every aspect of this scene, even when nothing exciting is happening like Pitt slowly walking to and getting into the care. For someone who admittedly can have a short attention span, it was not easy to become all that invested as to what Pitt was doing since there was a bigger desire for the film to stop fannying about and get to the point. This kind of pacing can seriously steer this film dangerously into dull territory, and there are certainly scenes where you’re just not that invested in what’s happening, even when you probably should be. In fact, the movie finds firmer footing when it transports the action to London, and in fairness it’s a far more interesting aspect of the story to focus more on anyway, even though there is significantly less Nazi killing in this part of the film.

Certain pacing issues within its flawed script may have hindered my full enjoyment for this film, but at the very least it is well-made enough to look past some of its gaping problems. Zemeckis has always been the kind of director that heavily favours spectacle but always finds the humanity within its core, and here he definitely makes scenes work – even when the slow pacing and occasional dull tone can threaten to derail it – through some sincere intensity that starts to boil over as it gets nearer and nearer to its climax. The scenes of Pitt desperately trying to prove that his wife is innocent of what she is accused of being, mixed in with scenes of him doubting his own sense of the truth, are gripping and expertly laid out for the audience to see the cogs spinning in his head. Sequences with much larger events within them, such as a late break-in into a French prison, or a Nazi plane being shot out of the sky and unnervingly close to Pitt and Cotillard’s home, also create a powerful sense of dread and uncertainty, but don’t distract from the main narrative and its raw emotional centre.

This kind of film, however, lives or dies on the pairing of its two lead actors. Brad Pitt and Marion Cotillard are two very good actors who have each given strong performances in the past and will undoubtedly continue to do so in the future, and while their chemistry isn’t something to write home about here, they are absolutely serviceable here. Pitt does some solid work here, as does Cotillard, but together they don’t quite have the same kind of spark as other movie stars have done in past films like this. However, they’re not terrible together, and there are some moments where they do actually feel like a couple as opposed to a couple of well-paid actors pretending to be a couple.

So, much like Allied itself, Pitt and Cotillard as an on-screen couple have faults, often some frustrating ones, but in the end it amounts to something that’s satisfying enough, if somewhat dispensable afterwards.

Allied initially struggles to keep things afloat with a slow pace and dull tone, not to mention a hit-and-miss chemistry between leads Brad Pitt and Marion Cotillard, but it is well-made enough with some scenes and sequences of pure intensity to recommend as a Saturday afternoon film to play in the background, which probably isn’t the endgame that director Robert Zemeckis was hoping for with this film.