All Together Now (Review)

All Together Now (Review) 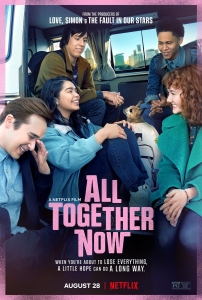 Between All The Bright Places from earlier this year and now this film, director Brett Haley appears to have a monopoly on hard-hitting Netflix teen dramas beginning with the word “all”. He clearly knows how to organically work his way into the emotions of his audience, with his previous indie features like Hearts Beat Loud and I’ll See You In My Dreams also succeeding in giving viewers some compelling drama without skipping over some of the more impactful moments, and with All Together Now he’s made an accessible rollercoaster of feelings that’s immensely likeable in the wake of its continuously devastating subject matter.

The film is about Amber (Auli’I Cravalho), who is by all accounts a gold-star person; she’s supportive of her friends, she’s musically talented, she gets involved with extra-curricular activities like organising her school’s variety show, she works at both a donut shop and a retirement home, and she even finds time to teach Korean women English. However, for all the optimism she freely offers to others, the one person most in need of help is herself; she sleeps in a school bus with her manic-depressive mother Becky (Justina Machado), having both fled an abusive household, and she barely makes enough to afford a potential apartment for the both of them. As a life-changing audition at a prestigious drama school lurks around the corner, Amber starts to feel overwhelmed by her immense responsibilities, and her stubbornness prevents her from accepting help from others, especially when tragedy strikes and threatens to determine her own future.

For a movie that so easily could have been just another saccharine teen melodrama that’s been cynically designed to get your waterworks going, Haley – also a co-writer – skips around a lot of those mechanisms to give this story and these characters a decent amount of authenticity, while also focusing on a good-hearted message about the importance of accepting help from people who genuinely care about you. At the centre of it all is Amber, a character who you’re immediately on the side of as soon as you see how charming and charismatic she is to pretty much everyone around her, and also incredibly sympathetic towards once you learn about the devastating things she has to carry through her personal life. However, she isn’t completely infallible, as we see that her reluctance to accept help or advice from those closest to her does make things a lot harder for her, and from an audience’s perspective it’s easy to get frustrated when she won’t swallow her pride and ask someone for guidance, even when the worst things imaginable begin happening to her. Nonetheless, she is still a character you’re heavily invested in, largely thanks to an outstanding turn by Auli’I Cravalho who, in her first live-action lead role (she is best known as the titular voice in Moana), perfectly captures the good-natured soul of the character as well as her less-than-desirable flaws, and has just as strong dramatic chops as she does comedic ones, even holding her own against screen comedy legend Carol Burnett, who plays a crotchety Breaking Bad-watching lady at the retirement home.

Like Haley’s previous Netflix feature, this is very much an emotional rollercoaster that’ll share its heartbreak and hopefulness at regular intervals, although this movie probably doesn’t need to come with a trigger warning for some of its themes as All The Bright Places did. There are things that happen in this movie which would make anyone have a emotional breakdown if they were in the characters’ shoes, but also things that reaffirm a person’s undying hope in humanity, in ways that you could certainly argue are cheesy and unrealistic, but at least leave you with a legitimately warm feeling in your heart as opposed to feeling utterly miserable throughout the entirety of it. Haley ensures this by setting a fair tonal balance between schmaltzy feel-good drama and honest, down-to-earth filmmaking, complete with authentic characters who react to certain situations like most normal people would, and a story that is told in a straightforward but never disingenuous manner. The result is a film that is easy for anyone to watch and absorb its powerful messages, while also taking them through the expected emotions without feeling too forced or manipulative, and for the younger crowd it’s perhaps a vital movie to put on for them, if only to teach them the value of both giving and receiving help.

While I wouldn’t go so far as to say that this is one of the year’s best films by any means, All Together Now is an effective drama that hits as many of the right notes as it can, with an endless amount of charm and likeability that really sets itself apart from the numerous other teen movies that like to sprinkle a little too much saccharine onto its product. On another note, it’s perhaps one of the few roles outside of SNL that Fred Armisen has played – he’s the school’s drama teacher who Amber confides in on several occasions – where he’s actually human for once and not some weird exaggerated cartoon, which he ironically achieved by starring alongside an actress best known for playing a cartoon. It just goes to show the immense talent and star-quality ambitions that Auli’I Cravalho sets for herself here, and hopefully for everything she does in the future.

All Together Now is an emotional teen drama which is lent a genuine and humble tone by director and co-writer Brett Haley that ensures it doesn’t completely fall into saccharine territory, as does an outstanding lead turn by Auli’I Cravalho whose immense charm and likeability lends the film and her character a great level of humanity that sets itself apart from most of the other films of its calibre.

Want to decide what the movie’s like for yourself?
Check out All Together Now streaming links
via