All The Bright Places (Review)

All The Bright Places (Review) 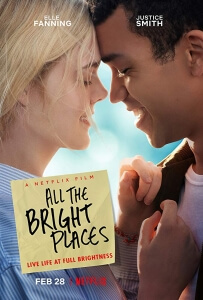 BASICALLY…: High school students Violet (Fanning) and Finch (Smith) work through their personal traumas as they embark on a relationship with each other…

As we take extra care of our physical health during these unprecedented times, we must also be mindful of our mental health. It isn’t going to be easy for the next short while, with everything closing and being asked to keep a safe distance from our loved ones, but if you are mentally struggling during all of this and need some reassurance during what is certainly going to be rough for all of us, then do whatever you can (within reason) to reach out and talk to people who will understand your worries.

In addition, perhaps don’t watch All The Bright Places either; not because it’s a bad film by any means, but because it’s bound to cause a serious amount of triggers for anyone experiencing deep bouts of depression, anxiety, and even thoughts of suicide. It’s not quite to the extent of 13 Reasons Why – which, like this film, is also available on Netflix – but anyone who is severely struggling to keep it all together in their head had best be warned before deciding to watch it.

Trigger warnings aside, though, this is a powerful coming-of-age drama that hits some sensitive notes but gets by with a strong level of charm and sophistication.

The film starts with a meet-cute to end all meet-cutes: Finch (Justice Smith), a young high school student, is out on a morning run when he spots classmate Violet (Elle Fanning) standing on a bridge, seemingly about to jump. Although he manages to talk her down, it doesn’t instantly cure things for either of them; she is in deep mourning for her sister, who died in a car accident that she was also in, while he constantly battles low moods brought upon by some serious childhood trauma. It’s not until they pair up for a school assignment that they finally start to bond, and soon they become romantically involved with each other, which is soon threatened by the stark clouds of sadness hovering over both of them, but Finch in particular.

There’s a lot to unpack here with the film’s heavy themes of teenage depression and anxiety, which is dealt with here in far more serious fashion than something like The Edge of Seventeen, which leaned a little more towards comedy; this is very much designed to be a tearjerker drama, where you can certainly feel the manipulation in the dialogue and the music, but it feels a lot more genuine than a lot of the other, more cynical YA weepies out there. It kind of has to feel a lot more truthful because, again, it’s dealing with several topics that are impossible to tiptoe around, and which also need to be talked about with any young person, particularly if any of them feel similar feelings to what its main characters go through. The script, co-written by Liz Hannah and Jennifer Niven (the author of the book it is based on), dives as deep as it can into the psychological well-being of the two protagonists, from Finch’s seemingly sound sense of self-confidence masking his tendency to slip into darker moods, to Violet’s gradual growth as a more assured person in the wake of her personal tragedy, and it balances the tone fairly well for the topics at play to always feel like the serious cases that they are. Though it’s unlikely to be the be-all end-all when it comes to teen dramas about serious mental health issues, the screenplay is certainly solid enough for it to at least be a starting point for others to take over from.

The two lead performances also add to the genuine warmth and complexity of their characters; Elle Fanning – who also produces, in her first such credit – and Justice Smith both have a remarkable connection with each other, and it feels genuine as to why these two people would end up together because they both come from very similar dark places and deal with it in similar, but also very different, ways. Some will undoubtedly find Smith’s character frustrating at first, because he does tend to assert himself as the bossier of the two – which, again, is all just an artificial illusion to hide his real traumas – but the actor doesn’t lean too far into this personality trait, especially from the second half onwards where he really gets to portray some very upsetting emotions that are bound to catch people off-guard. As for Fanning, who is great in just about everything she does, she pours her heart and soul into this film, and her strong efforts clearly show in not just her solid performance but also how the film feels as close as it can to the teen experience under her producer’s credit (although, at 21 and 24 respectively, both she and Smith are starting to look a little old to pass as high school students, but the illusion is still just about believable).

Again, though, it needs to be stressed that anyone who is susceptible to low moods and potentially harmful thoughts to one’s self should probably be advised against this movie, if only due to its strong emotional triggers that could cause a tidal wave of feelings to wash over them. That’s not to say anyone shouldn’t watch it at all, because it is a powerful enough movie to feel like your time isn’t being wasted, but those going through a mentally rough time at the moment, especially with everything going on right now, might just need to tread carefully around what is otherwise a pretty solid look at a very real subject matter.

All The Bright Places is a powerful YA romantic drama that keeps a fair tonal balance when addressing its serious subject matter, along with two solid lead performances from Elle Fanning and Justice Smith, but those with mental health problems might want to steer clear due to its strong emotional triggers which could upset them even more.