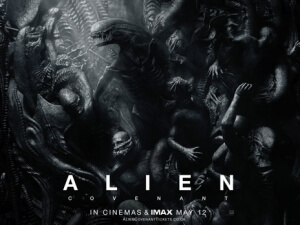 BASICALLY…: The crew of the colony ship Covenant comes across a planet that seems like paradise, but is soon revealed to be the home to a terrifying breed of deadly creatures…

Despite the hype, Ridley Scott’s Prometheus – a return for the director to the world of Alien more than 30 years after making the very first one – turned out to be a hugely divisive film within the fan base, and even to this day audiences are still at odds over whether it was any good or not. But one thing was clear either way: it did not live up to expectations for those expecting a full-on Alien movie.

Maybe that’s why Scott’s follow-up Alien: Covenant has been marketed as being a more traditional film in the franchise, complete with an appearance by the iconic HR Geiger-designed creature which Prometheus was sorely lacking. The final product, however, is much closer to its predecessor than any of the other films, in that it contains similar themes and sometimes even the same characters from Prometheus with the titular alien not appearing until much later, but Alien: Covenant manages to be a slightly more entertaining sit and should give fans of the franchise some familiar but reliable action.

This one picks up ten years after the fateful Prometheus mission, this time focusing on the colony spaceship Covenant as it journeys towards an inhabitable planet with a handful of crew members and thousands of human embryos on board. The crew, including android Walter (Michael Fassbender), terraforming expert Daniels (Katherine Waterston), pilot Tennessee (Danny McBride) and acting captain Oram (Billy Crudup) among others, come across a transmission from a nearby planet and decide to go and investigate, finding that not only is the surface breathable, but that someone might already be living there – that someone being David (also Fassbender), the sole android survivor of the Prometheus voyage, who let’s just say has been up to a whole lot over the past ten years.

From there, it’s the gnarly extra-terrestrial action and violence you’ve come to expect from an Alien movie, which is fine if that’s what you’re going in for, but know that while it is definitely an Alien film, it’s also very much a sequel to Prometheus that feels like it’s stepping things up from before. For one, Damon Lindelof – the writer of Prometheus, and a common target for its criticism – is gone from the writer’s room and replaced by John Logan, someone who knows how to construct a plot and cast of characters a lot more fluidly, which shows throughout Alien: Covenant. The story takes a more traditional route that’s closer to the spirit of the first few Alien films, which might not please fans wanting something more fresh from the series, but is done effectively and with characters that are likeable and interesting enough to keep you invested even in its more familiar moments. Nobody’s making the same dumb mistakes from Prometheus, like running in a straight line from a falling giant object or trying to befriend a vicious-looking snake monster (although that’s not to say that characters don’t do stupid things the entire time), and you can really feel these actors – especially Fassbender, who gets to shine twice in a dual role as Walter and David – have been given far more material to chew on than Lindelof’s previous script. The result is a marginally more satisfying entry that answers a few more questions surrounding the Alien mythos, but like Prometheus only raises more questions than answers, and given the recent news that Ridley Scott wants to make at least two more films with this storyline it’s likely we won’t be getting the full scale of the picture any time soon.

Thank goodness that the entertainment factor is high enough to make it a pleasant watch, as since this is technically a better written film than Prometheus, there are moments that feel like forced studio notes which hinder the film from being among the very best of the franchise (i.e. the first two). An action-heavy third act is particularly guilty of this, which follows the typical beats of an Alien film almost to a tee only with far heavier CGI, and doesn’t feel like it matches the slightly darker tone of the rest of the film. It takes as much advantage of its more adult rating as it can, with vicious scenes of violence and characters swearing up a storm, but despite some likeable characters – at least, more than there were in Prometheus – there is rarely a sense of comradery between the crew members, and the blue-collar language shared between them as well as the gruesome violence all just feels like Scott trying desperately to recapture the lightning in the bottle that was the first Alien film. In fact, the only two characters that have the best chemistry with each other are played by the same actor; Fassbender has a couple of intense scenes acting opposite himself, both of which invoke some pretty hardcore sexual overtones, including a line that is bound to become a new classic in Freudian cinema.

All in all, much like Prometheus, it’s a bit of a mixed bag. On the one hand, the changes that Scott and his team made in response to that film’s divisive reception are for the better, as it’s superiorly written with far more engaging characters and less stupidity on their part, but on the other hand it’s still nowhere near to recapturing the magic of the earlier films, with familiar plot beats and formulas that have noble intentions but ultimately prevent Alien: Covenant from fully reaching orbit.

Alien: Covenant is a notable step-up from the divisive reception of Prometheus, as this film features more engaging characters and slightly less stupidity in the script, but there is a noticeable lack of freshness in the air as Ridley Scott tries his hardest to recapture the magic of his original Alien film, but ultimately comes up rather short.