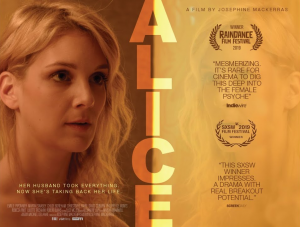 BASICALLY…: After she discovers that her husband has been spending their money on prostitutes, Alice decides to become an escort in order to provide for her and her son…

Continuing on with the sex-positive vibes that last week’s Come As You Are established, Josephine Mackerras’ Alice is another top-class, heartfelt tale of empowerment within the confides of the world’s oldest profession. However, sex is not all that’s on the film’s mind; it’s also a telling and deeply honest look at unfair double standards within a society that judges women far more harshly than men, as well as a powerful disintegration of a marriage that has been marred by toxic behaviour and self-serving decisions.

Basically, there’s more to Alice than meets the eye, and it’s all the better for it.

Mackerras’ film is about a woman named – what else? – Alice (Emilie Piponnier), who takes care of her young son Jules (played by the director’s own child, Jules Milo Levy Mackerras) while her husband François (Martin Swabey) spends the day working. However, Alice soon discovers that François has been taking out large sums of their money – much of it coming from Alice’s own inheritance – to pay for high-end escorts, which has put them months behind on their mortgage, and subsequently they are facing eviction notices. Furious but also desperate to save her home, Alice decides to become an escort herself once she learns of the high prices she could potentially earn, and as she gets more into her work she begins to discover things about herself that she never thought were possible, and in doing so she becomes a freer, more confident woman.

So many films that view the world of prostitution from a woman’s perspective usually tend to focus on murkier aspects like sexual and/or physical violence or controlling pimps, which are legitimate concerns for anyone in the profession, but Alice largely sidesteps all of that – though it isn’t without its fair share of awkward moments, particularly when Piponnier’s title character meets her first client – to portray it merely as a means to not just make good money, but to also feel every bit as worth as the hundreds, even thousands, of euros they earn. Mackerras, also the film’s writer and producer, has a clear message she wants to convey here, which doesn’t by any means put down that particular industry, but instead acknowledges it as a job just like any other, and in the case of her main character it provides an outlet for her to open herself up (no pun intended) to a world that doesn’t judge as harshly as everyone else seems to do. Piponnier’s captivating performance also really sells the character’s desperation but also her calm and increasingly free-spirited as she learns that she is way above the life she had previously chosen for herself. I greatly admire any film that doesn’t treat sex and its numerous industries as something that should be frowned upon, and with its healthy and balanced view of a profession that is largely scorned by society Alice is one that earns real respect.

Far more devastating, though, is the unjust misogyny and toxic opinions in society that the film sets out to explore. From the very first scene, we get a hint of the monstrous François’ sexual politics when he playfully dubs his wife a witch for not giving their son some chocolate; later on, when he reappears after days of absence (highly implied to be another sex binge), he’s teary-eyed and constantly whispering romantic lines in his wife’s ear in the vain hope that she’ll take him back. Far worse is when Alice tells her mother about her husband’s numerous flings with prostitutes, with the mother being quick to defend her son-in-law and even quicker to criticise her own daughter for not giving him the pleasure he apparently needs. Scenes like these where Alice is constantly being patronised and made to feel far less important than she really is are way more uncomfortable to sit through than any scene involving sex or nudity (which there is interestingly little of), because much like Henrik Ibsen’s classic play A Doll’s House it serves to show an uncomfortably male dominance in every aspect of this woman’s life, as if to say men can get away with anything they want while the women are left to pick up their mess. Every time you see François trying to weasel his way back into his family, always coming up with some excuse for his inexcusable behaviour, and later asserting control by threatening legal action, you just want the scorned Alice to deck him right in his Eiffel tower, because just like her you are fed up with his hypocrisy and entitlement that, unfortunately, rings true for the much larger society that the film puts under the spotlight.

The film conveys what it wants to say without overstepping its boundaries, but also remembers to be a smart, entertaining, even comical at times drama that dives deep into the scorned female psyche and relishes the wonders that it is capable of. Mackerras is a formidable talent behind the camera, and with this being her first feature after a handful of shorts she breaks through with impressive craftsmanship ranging from some colourful cinematography to slick editing choices. Hopefully she will go on to do great things, because if she can make a story about a struggling housewife becoming an escort feel like an inspiring and empowering crowd-pleaser, then her talents must be astronomical.

Alice is an empowering and even uplifting tale of a scorned wife entering the world of prostitution, admirably sidestepping most of the negative connotations surrounding the profession to show how it helps the lead character – played remarkably by Emilie Pionnier – come out of her shell, with writer-director Josephine Mackerras also shedding light on uncomfortable double standards and casual misogyny that sadly exists in our society.

Want to decide what the movie’s like for yourself?
Check out Alice streaming links
via