Alice Through The Looking Glass (Review)

Alice Through The Looking Glass (Review) 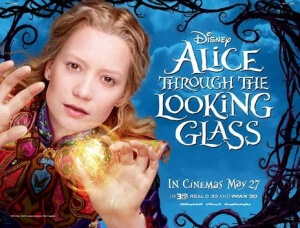 BASICALLY…: Alice (Wasikowska) returns to Wonderland where she must save the Mad Hatter (Depp) from the sinister clutches of Time (Cohen)…

It’s fair to say that outside of hardcore Tim Burton devotees, nobody truly liked his 2010 take on Alice in Wonderland, especially anyone with an overwhelming love for the original source material by Lewis Carroll which that film all but ignored except for its recognisable title. Nonetheless, it ended up making over $1 billion worldwide, largely due to the post-Avatar 3D craze which it opened only a few months after, and so all the criticisms of the unoriginal plot, dull characters and overwhelming use of CGI fell on deaf ears at Disney who decided to go ahead and greenlight a sequel… six years later.

Over that time, the backlash against Burton’s film has more than settled in, and even those who liked it the first time around have realised that it doesn’t hold up particularly well on repeat viewings, especially more than half a decade later. As a result, any follow-up that reintroduces this particular version of Wonderland – known formally as “Underland” here – and these incarnations of Carroll’s classic characters will almost certainly be met with hesitation and scepticism – but while Alice Through The Looking Glass isn’t necessarily a great movie, nor is it really that good, we can say with a little bit of pride that it’s at the very least an improvement on the last film, although that really isn’t saying much.

James Bobin (The Muppets) takes over as director while Burton produces this time, which picks up a few years after the original where we see Alice (Mia Wasikowska, delivering a much more lively performance this time) returning home after an opening sea voyage straight out of a Pirates of the Caribbean deleted scene. Unfortunately, her foppish and bitter ex-fiancé Hamish (Leo Bill) has taken over her father’s company and wants her to sign away her father’s ship to save her family home – but don’t worry, the film’s just as disinterested in this storyline as we are, and soon Alice returns to Wonderland Underland where the Mad Hatter (Johnny Depp) is acting more erratic than usual, under the seemingly-delusional pretence that his family is still alive somewhere. To fix the problem, Alice must pay a visit to Time (Sacha Baron Cohen) in order to retrieve a “Chronosphere” – basically a spherical Tardis – which will allow her to time-travel and return to when things started to get out of control.

In case you haven’t figured it out yet, none of this has anything to do with the Carroll book which this film borrows its title from, but we reckon at this point, given how the last film also took severe liberties with the original story, book purists should know what they’re getting into. The intent by writer Linda Woolverton is to present a reinterpretation of the story and characters, which is a fair and ambitious task for any writer to take on, and although it hasn’t gone down well at all for anyone who loves the books no one should chastise Woolverton for wanting to at the very least do something different with the material rather than just do what they keep doing with versions of A Christmas Carol and simply adapt it word for word. In short, do not go in expecting anything to do with the book it borrows its title from, because you’ll only be setting yourself up for disappointment.

That being said, Alice Through The Looking Glass still has some major problems, most of them revolving around the plot that Woolverton has chosen to incorporate into it. The introduction of time-travel into any unrelated storyline is almost always a sign of creative bankruptcy, and here it seems to only give the film a reason to exist outside of the first film’s substantial worldwide earnings; here, it’s used for Alice and by extension the audience to go back and witness the not-so-humble origins of characters like the Mad Hatter and Helena Bonham Carter’s Red Queen, going into details about things we neither cared about nor wanted to find out such as why the Red Queen’s head is so massive or the Mad Hatter’s daddy issues. None of these things neither excite us nor give us any real reason to care about what’s going on.

It all just seems like everyone was on a mandate to just churn out a sequel and get it done with, and you have to also give Bobin some credit for taking on such a thankless task and making the most of it despite the mess he’s been given to clean up; he injects a lot more colour, humour and even a little more heart than Burton could manage last time, at certain points even managing to paint an image of madness and nonsense that’s just that little bit closer to Carroll’s Wonderland than before. Also commendable, too, is Sacha Baron Cohen’s portrayal of Time as this autocratic Werner Herzog type with clockwork body part and electric lights in his eyes; his is perhaps the most Carroll-esque character in the entire film, and Baron Cohen uses that to his advantage by making him a funny but also slightly intimidating presence that fits well within the original Carroll bibliography despite being a new character created exclusively for this film (plus, it’s a FAR better Sacha Baron Cohen movie than Grimsby, which is always nice).

In the end, Alice Through The Looking Glass is exactly what you think you’ll get; it’s definitely not the book, but it’s far from the outright disaster that the first film was either. At least there’s no random breakdancing in this one, though.

Alice Through The Looking Glass continues to take severe liberties from Lewis Carroll’s books, but while this film isn’t quite as bad as Tim Burton’s predecessor thanks to James Bobin’s more lively direction and Sacha Baron Cohen’s quirky portrayal of Time, it incorporates a time-travel plot that’s creatively bankrupt and even further from the source material.