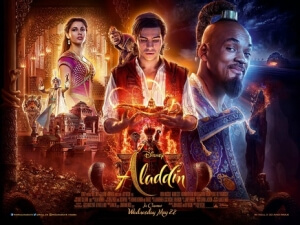 BASICALLY…: Street merchant Aladdin (Massoud) seeks to win the heart of Princess Jasmine (Scott), with the help of a magical Genie (Smith)…

Disney’s trend of capitalising on our nostalgia has been met with a fairly mixed reception; while there are some who see no problems with the studio giant remaking their classic animated movies into live-action blockbusters, there are others who cannot stand the blatant cynicism and lack of creativity on their part, as most of them are just the exact same film as before but with more real actors.

I like to think that I fall somewhere between the middle; while I agree wholeheartedly that there is no reason for these movies to exist other than for purely financial gain, I can’t bring myself to fully hate them, because as creatively lacking as many of them can be, I appreciate the full-blown efforts that have gone into making a cartoon feel as real as it could ever be, even though sometimes the results can be hit or miss. Jon Favreau’s The Jungle Book, for example, was a technical marvel with its stunning use of photo-realistic CGI, and its updates to the story compared to how they were in the 1967 animated version honestly make it one of the few times where the remake is stronger than the original; meanwhile, more faithful remakes like Beauty and the Beast and Cinderella are reasonably handsome and have their own charms in their polished nature, even though they really are just more of the same but with heavy cosmetics.

Aladdin, their latest live-action remake, falls into the latter category, albeit just barely as while there are certainly some things of note here and there, it’s one of those cases where – as handsome and well-polished as it looks – it doesn’t always rub the right way.

If you know the story of Aladdin, then you don’t need me to go over it again… but just in case you don’t: it’s the story of a street thief named Aladdin (Mena Massoud) who lives in the Arabian city of Agrabah, and falls for the beautiful Princess Jasmine (Naomi Scott). However, because she may only marry a prince, she is pretty much off-limits for him, but when he is tricked by Jafar (Marwen Kenzari), the power-hungry advisor to the Sultan (Navid Negahban), into wandering into the Cave of Wonders and stealing a magical lamp for him, he encounters the all-powerful and magical Genie (Will Smith) who resides in said lamp and grants three wishes to whoever stumbles upon him. Aladdin decides to use one of his wishes to become a prince and woo Jasmine under the guise of Prince Ali, but not if Jafar gets in the way of their happiness.

Like all of these Disney remakes, even the better ones, there really isn’t a good reason for this movie to exist; the story is pretty much the same as the animated original, beat by beat, with new additions that really don’t add a lot to the overall narrative except to prolong it more than it ever needed to be. Some of the new additions are welcome for a more modern audience – Jasmine, for example, now seeks to rule as Sultan instead of just begrudgingly having to marry a prince – but others, such as a romantic sub-plot involving the Genie and Jasmine’s handmaiden Dalia (SNL alumni Nasim Pedrad) as well as Jafar’s desire to invade a neighbouring kingdom, tend to fall flat because when you look at them in terms of the mechanics, there’s not much point to them even being there because they serve little to no purpose in furthering the overall story that we’re already familiar with. If additions such as these can work, then the rest of the film needs to differentiate more from the movie that people have memorised in their heads before this one, but because so much of the film is almost an exact carbon copy, to a point to where exact lines of dialogue are reused verbatim, it’s nearly impossible to separate it from the animated classic we all know and love.

Even though its very existence has little to no meaning, especially when there’s a far superior animated version from nearly thirty years ago, and there’s so much about this movie I didn’t really care for – the humour is lacking, some of the acting is a little wooden, and the CGI is not only overused but also not very convincing half the time – I still can’t say that I absolutely despised it. Yes, the original is way better, if anything just for the fantastic voice performance of the late, great Robin Williams as the Genie alone, but with this I have to at the very least applaud the efforts of those who made the thing. Although it barely feels like one of his films, outside of a few ambitious shots and uses of editing, director Guy Ritchie injects whatever life he can into the colourful visuals and impressive production design (regardless, it is a notable step up from his awful last feature, King Arthur: Legend of the Sword), while Will Smith wisely makes the role of the Genie his own without stomping all over the legacy that Williams left with the character. Elsewhere, Mena Massoud does fine as the titular character, and Naomi Scott is a formidable force as the slightly reimagined Jasmine, although Marwen Kenzari’s Jafar is nowhere near as intimidating or even fun as his animated counterpart; the performance is too one-note and bland for a character so memorably evil and unique-looking. As for the music, the classics such as “A Whole New World” and “Friend Like Me” are present and correct, along with some new lyrics by La La Land and The Greatest Showman songwriters Benj Pasek and Justin Paul as well as a brand-new empowering ballad for Jasmine, and although not quite as wondrous or magical as they were in the original they are done with serviceable justice – and at any rate, by the time we get to the end-credits versions of some of these songs, the first of which begins with that fearful yell “DJ KHALED!”, you’ll be thankful for them.

Is there any reason for this movie to exist, outside of making even more money for Disney? Absolutely not, but for all its flaws – and there are many – it is a harmless retread into familiar territory that has its moments, but not enough to make me wish to forget about the far superior movie that it’s based on.

Aladdin is another live-action remake of a classic animated Disney movie that doesn’t do much to set itself apart from the far superior original, but for all its flaws it is a harmless and reasonably well-made retread that follows the beats and songs we’re all familiar with, with Will Smith making the character made famous by Robin Williams enough of his own.

Check out Aladdin showtimes in London
on Walloh.