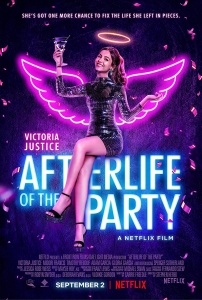 BASICALLY…: A hard-partying woman (Justice) suddenly dies, but finds she is unable to ascend to the afterlife until she rights her wrongs on Earth…

The afterlife is such an imaginative concept that it’s often quite easy to forget how scary it actually is. What exactly does happen when we die, where do we go, and how do we get there? Either your mind is overrun with ideas, or cowering in fear as it reminds you of your eventual fate; whichever category you fall under, it’s always interesting when movies and TV shows – from What Dreams May Come to The Good Place to Steven Spielberg’s little-seen Always – attempt to visualise what comes next, often depicting Heaven and Hell exactly as you’d imagine.

Afterlife of the Party, the new Netflix comedy-drama, doesn’t change the game when it comes to showing the afterlife, but as a tween-friendly supernatural film that’s certainly cheesy, but with its heart in the right place, it’s a passable look into the next stage in post-life.

Directed by Stephen Herek – of Bill & Ted’s Excellent Adventure fame – Afterlife of the Party quickly introduces us to Cassie (Victoria Justice), a social butterfly who’s preparing to celebrate her 25th birthday, and her roommate and lifelong bestie Lisa (Midori Francis) who’s nowhere near as outgoing or adventurous. However, a long night of drinking and an unfortunate bathroom incident leaves her lying dead on the floor, with her spirit suddenly transformed to a purgatory-like place where her guardian angel Val (Robyn Scott) informs her that she has a few days to sort out some unfinished business back on Earth. This includes reuniting with Lisa, with whom she had a nasty argument before her demise, reconnecting with her depressed father Howie (Adam Garcia), and finding closure with her mother Sofia (Gloria Garcia) who abandoned her family for a new life.

It’s appropriate that someone like Victoria Justice is headlining this movie, because Afterlife of the Party oddly feels like a Nickelodeon sitcom at times. With its use of singular sets (characters even say out loud how similar one place is to another), cheesy effects, and dialogue that feels like studio audience laughter should immediately follow after, you can almost see this as a continuation of Justice’s Victorious series, if it followed her character into adulthood (though it wouldn’t last very long because, well, she dies). Justice’s performance also isn’t unlike what you’d find in a standard Nickelodeon show, but that’s not necessarily a bad thing; she is good in the movie, and is even rather charming in parts, but the lame sitcom gag rate pulls her well-meaning turn down a notch, as she’s forced to say dialogue that’s clearly written for a studio audience to react at, instead of feeling a bit more natural to the situation. Some of the first sentences she utters in the film have to do with Lisa being her best friend and how they’ve been together since kids, and it comes off so awkwardly because you can tell it’s simply exposition that’s been crammed into this script.

The film contains lessons and morals which are very easy to understand, and predicaments that you can see coming from a way away (it’s one of those afterlife movies where select mortals can see the spirit of the dead person, leading to plenty of moments where said mortal looks crazy for screaming or reacting to thin air). However, as cheesy as it is, there is also a tenderness to it which makes the film surprisingly emotional to watch. In a way, you can tell that this was directed by the same guy who did Bill & Ted’s Excellent Adventure, because deep underneath the silliness of it all there is a beating heart at the centre, with likeable characters who do share good chemistry with each other, and a strong, sweet emotional core where you actually do come close to shedding a couple of tears. It’s also admirable in how the movie sticks firmly to its guns; there’s nary a hint that this is all just a dream or a vivid drunken hallucination, meaning that our lead character is definitely dead and stays that way through nearly the whole movie. It’s like opposite Yesterday, which honestly could have used a cop-out like that to solve a lot of its other problems, whereas here the lack of one makes a lot more sense for the story and character development.

Though it isn’t likely to become a new must-see example of depicting the afterlife in cinema, Afterlife of the Party does have some admirable qualities which are sweet and savoury, which at least makes it a pleasant enough watch. If it had ditched the Nickelodeon sitcom stylings, maybe it could have been more destined for eternal bliss higher up – as is, though, it neatly avoids eternal damnation at the same time.

Afterlife of the Party occasionally suffers from cheesy sitcom trappings, from awkward dialogue to even more awkward situations, but it’s also got a tender and surprisingly emotional core, as well as a charming lead turn by Victoria Justice, which are both sweet enough to make for good-hearted entertainment.

Afterlife of the Party is now available on Netflix.