After The Wedding (Review)

After The Wedding (Review) 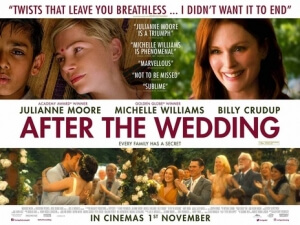 BASICALLY…: Isabel (Williams), the manager of an Indian orphanage, meets with potential benefactor Theresa (Moore), only to come face-to-face with figures from her past…

This year, Julianne Moore has appeared in two high-profile American remakes of well-regarded international hits, both of which see the actress give what she’s got in performances where she clearly stands out (albeit for very different reasons). Gloria Bell is still the better of the two by a long shot, but After The Wedding – remade from Susanne Bier’s Oscar-nominated Danish drama of the same name –perhaps doesn’t deserve all of the flack it’s been receiving from critics (and at a low 47% on Rotten Tomatoes, it’s certainly not been beloved exactly).

That being said, it’s easy to pick up on the film’s flaws, and why others would be so put off by them.

Under the direction of her husband Bart Freundlich (who also wrote the screenplay), Moore has the showier of the three lead parts, even if she isn’t technically the main character; that distinction goes to Isabel (Michelle Williams), who helps run an orphanage in India which is suffering from depleted funds. She is given an opportunity to obtain $2 million from Theresa (Moore), a wealthy benefactor in New York who Isabel reluctantly travels to meet with, and she ends up being invited to the wedding of Theresa’s daughter Grace (Abby Quinn) in the hopes that the donation can become official. However, at the wedding, Isabel bumps into Theresa’s husband Oscar (Billy Crudup), who turns out to be a figure from her past, and discovers a shocking revelation that changes everything.

Despite not having seen the original film, it’s easy to tell that this is a watered-down version. Gone is any sense of grit that may have been suggested by Bier’s version (wherein the main characters’ genders have been switched around) and the melodrama is turned way, way up to an almost laughable degree. It aims for a class-centric angle, with the super-wealthy American benefactors clashing with the woman sticking up for those in poverty, but the manner of both Freundlich’s direction and writing makes it feel oddly shallow, as none of the main characters are truly sympathetic enough to make you properly care about their first-world problems. Sometimes, it feels like those Comic Relief PSAs where a white person travels to a third-world country and spends most of it crying about their own feelings about the situation instead of how the actual people might be feeling about it; there are much more pressing issues that are introduced in this story than just the ones revolving around the privileged protagonists, and it seems like the movie doesn’t truly care about them, instead just cynically cramming them in just to make some of them look like good people.

That’s before the film gets way too treacly with its drama, and when it arrives it does so with a loud thump. The central twist of the movie did at first get me (again, only because I hadn’t seen the original movie), but it tends to dissolve into a cheesy soap opera storyline after a short while, before eventually becoming something that did actually have a sweet nature to itself. However, when another major twist is revealed later on in the movie, that’s when things really feel like they went too far in the melodrama, and was not at all needed to make the situation more dramatic than it was. It does lead to an epic piece of over-acting on Moore’s part, though, which is both a good and bad thing in the sense that it’s incredibly over-the-top but also the most entertaining part of the entire movie. It so desperately wants to be the kind of tearjerker that Oscar voters have wet dreams about, but in throwing so much drama into one scenario it feels like overkill, even for the Academy.

The movie is certainly flawed – very much so, in fact – but I did not think that this was an overall terrible movie. A little misguided, maybe, but certainly not as bad as some people are making it out to be. If nothing else, it is a very well-acted movie; Julianne Moore and Michelle Williams are great actresses who really give this material all of what they have to offer (although, in Moore’s case at times, perhaps a little too much), with equally strong supporting turns by Billy Crudup and Abby Quinn who liven up their characters through the sheer strength of their own emotional performances. From a personal standpoint, because I hadn’t seen the original movie on which this based – although, having read up about it online, the two movies are very similar if not the exact same – I did find myself surprised by the film’s big revelations, and to Freundlich’s credit he does generate enough intrigue to scenes leading up to the big reveal that leave you wondering what in the hell Crudup’s character might have done to her previously that causes her to have such a nervous reaction. It’s also a pretty-looking movie, with drone shots capturing vast landscapes of both India and upstate New York rather well, and scenes shot during luminous orange sunsets and apocalyptic-looking overcast parts of the day are lit and framed to an appealing notion.

Is this enough to wholly recommend the movie? Not really, for it’s one of those cases where both the positives and the negatives balance out perfectly well; it’s neither good nor bad, but is just fine. I definitely get why some critics have been so harsh on the movie, but I wouldn’t personally go that far. It’s a film that has its heart in the right place, but needed a lot more restraint in mining tears from its audiences’ eyes.

After The Wedding is not a complete success, with treacly and over-done drama edging out the grittiness of Susanne Bier’s original film, but it has enough positives to balance out the negatives, including some fine acting, decent imagery, and a noticeable heart that, while misguided in places, is at least there.

Want to decide what the movie’s like for yourself?
Check out After The Wedding showtimes in London
via