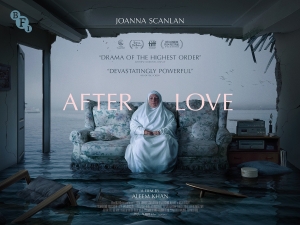 BASICALLY…: After the sudden death of her husband, a British-Islam woman (Scanlan) makes a heart-breaking discovery…

In my previous review for After Love – written following its world premiere at last year’s BFI London Film Festival – I pondered how general audiences would respond to its heavily emotional themes, since a number of them are portrayed so raw and with significant weight that it’d be hard for most people not to at least be affected in some capacity. Now, having seen the film with an actual audience, I can confirm that there were a lot more moments than I thought there’d be where certain moments hit much harder with others; there were loud gasps when something unexpected would happen right out of the blue, and even some uneasy laughter in parts shrouded in awkward conversation.

To my surprise, After Love really does seem to be the kind of film that audiences can easily respond to, on top of the film still being as powerful and layered as it was back in October. Fair warning, though: this review is mostly going to be an expansion of certain observations I have with this film, so if you’re wanting a more reactionary write-up then by all means check out the review I did for it last year. Basically, my thoughts on the movie are still the same (hint: pretty darn good), but with a few extra opinions on the side.

To bring you up to speed, the film comes from writer-director Aleem Khan, here making his feature filmmaking debut. His film is about Mary (Joanna Scanlan), a white British woman who converted to Islam some years ago to be with her husband Ahmed (Nasser Memarzia); however, when he suddenly passes away, Mary is left alone in their small house near the Dover cliff-face. Soon after, Mary discovers that her husband had secretly been living another life across the Channel in a small Calais town, with a woman named Geneviéve (Nathalie Richard) and their teenage son Solomon (Talid Ariss); she initially journeys across the French border to confront Geneviéve, but ends up providing housekeeping services for her after she is mistaken for a cleaner. Mary uses this opportunity to learn more about the family that her late husband had previously kept hidden from her, but it also leaves her questioning everything about her own identity, having sacrificed so much for a man who turns out to have not been completely faithful, yet still holds a very dear place in her broken heart.

The film’s biggest topics revolve around truth and honesty, which here come in various shapes and sizes because, in a way, each main character has at least one secret that they’re hiding from other people. Mary, of course, is keeping her true identity a secret from the “other” woman (as it were), while Geneviéve is lying to herself about the pros and cons of being involved with a man who is officially involved with someone else; even young Solomon becomes defensive when his fling with another young man is unexpectedly discovered. These people and their very different, yet also very similar, approaches to the truth are all connected to a man who perhaps committed the most devastating betrayal of all, but Khan’s film is quick to assess the emotional consequences rather than focus entirely on the bitter fallout, which gives his characters enough sense of empathy to overcome most of their initial outpourings of grief and anger and explore deeper, more personal themes that ultimately feel far more powerful and truthful.

It goes without saying, as it did in my previous review for After Love, that Joanna Scanlan is absolutely terrific in this film. She commands the screen with just the slightest infliction on her expressive face, often without the requirement for dialogue, and dominates the quietest of moments where you can tell each and every little thought crossing through her emotional mind. It will be very interesting to see if Scanlan can make it onto a number of acting shortlists over the next few months – and with BAFTA’s new voting guidelines in the acting categories, she could very well be in with a chance of at least getting nominated for her stunning lead work here – because her performance is so strong and even fearless in parts that it’ll be hard for a number of awards bodies to overlook her powerful turn.

Like I said, this isn’t so much of a full-on second review of After Love but more of an extension of my initial thoughts from the first time I saw this film. I pretty much said everything I could say about it previously in the first review, but that doesn’t mean that a second viewing is a complete waste of time. I still do strongly recommend it as a pretty good movie with powerful emotional themes and impressive direction and writing from first-time feature filmmaker Aleem Khan, which is solid enough justification for seeking it out for yet another review on this website.

After Love is a powerfully emotional drama that is rich with strong themes of truth and honesty in a neatly polished script by first-time feature filmmaker Aleem Khan, and contains a masterful lead turn by a career-best Joanna Scanlan.

After Love is now showing in cinemas nationwide – find a screening near you right here!