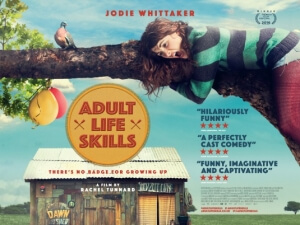 BASICALLY…: Anna (Whittaker) is approaching thirty, but she’s still living in her mother’s (Ashbourne) shed and not progressing whatsoever into proper adulthood…

Don’t you just love it when a film comes almost out of nowhere to delight audiences with its unashamed quirkiness? Adult Life Skills, based on the BAFTA-nominated short film Emotional Fusebox by editor-turned-filmmaker Rachel Tunnard, is only the latest out of these films to make its debut in cinemas, and anyone wanting to find a gem in the rubble created by the endless amount of Hollywood blockbusters will no doubt get exactly what they’re hoping for with this one.

Tunnard has recruited Broadchurch actress Jodie Whittaker, with whom she has been friends since university, to reprise her role from the short as Anna, a 29-year-old who lives in a shed outside of her mother (Lorraine Ashbourne, also reprising her role) and grandmother’s (Eileen Davies, replacing Marcia Warren) home in Yorkshire, and though she has a job working at a local boating centre she mostly spends her time in the shed making odd little films using her thumbs as actors. It’s a way of life that Anna’s mother can no longer tolerate, and she gives her up until her approaching 30th birthday to move out and make an actual life for herself, a notion which Anna all but ignores, even when she has a troubled young boy named Clint (newcomer Ozzy Myers) thrust upon her to look after. But is there a more tragic reason behind Anna’s mental refusal to act her age?

As it turns out, there is; without giving too much away, someone close to Anna passed away an undisclosed amount of time ago, in ways that are also undisclosed, and Anna’s slacker attitude is partially due to her struggling to contain her grief (among other things, namely that she’s relatively unambitious). This brings to question the differing methods in which we all try to cope with some form of depression, and in her case she’s decided to live in a shed doing nothing but making films with her thumbs arguing about the nihilistic or existentialist methods of Yogi Bear. Over the course of the film, she’s also plagued by visions and flashbacks of said person, piling on top of her insecurities as she attempts to connect with the limited amount of friends she has, from her mother and grandmother to returning school friend Fiona (Rachael Deering) to socially awkward realtor Brendan (Brett Goldstein), none of which seem to really bring her towards her long-overdue rude awakening. It’s only when little Clint comes into her life rather forcibly, equipped with his own family problems, that she finally gets some perspective on what it is to live as a teenager in an adult body, and what kind of impression she could potentially leave on someone as young and impressionable as this young boy. In that way, it’s oddly uplifting despite some of the more tragic elements, and the film speaks volumes on the overwhelming issue of depression in young adults and how it must be overcome to better the life of oneself and those around them.

Tunnard reflects these themes through the film’s unique quirkiness, in an impressive feature debut that manages to find the awkward humour in tough real-life situations without feeling out of place or in any way misguided. This also rings true with her approach to the main character; Anna isn’t an entirely sympathetic character, but the mixture of Tunnard’s strong writing and direction with Whittaker’s spirited tragi-comic performance equals out to a character you do end up wanting things to go right for by the film’s end. Through her, we see a lost soul who tries to get by with her own warped sense of humour, neglecting her growing responsibilities as an adult in the process, to a point where it all comes crashing down to depths that are far too real for anyone in this situation to truly grasp, even with as light-hearted an approach to it as she has.

For our money, Adult Life Skills is a solid debut film that delivers laughs, pathos and tragi-comic elements aplenty, worth checking out if you enjoy small pieces of breakthrough indie cinema like this one. That said, anyone who can be put off by quirky on-screen behaviours or deliveries may find it hard to like, but for everyone else it’s a relatively strong little film that’s worth being a fun little alternative to all the big-budgeted CGI splooge-fests being released right about now.

Adult Life Skills is a solid debut feature from filmmaker Rachel Tunnard, approaching the always-sensitive topics of depression within young adults and overdue maturity sensitively and giving it a delightfully quirky tone that lead actress Jodie Whittaker more than compliments with a sparky and lively tragi-comic lead performance.