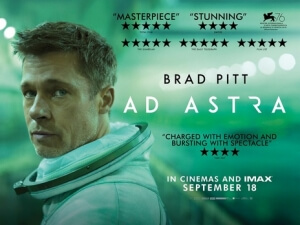 BASICALLY…: An astronaut (Pitt) travels far into the solar system to find his father (Jones), who holds the secret to a mystery that threatens the survival of Earth…

James Gray is slowly starting to become more mainstream, although that is not necessarily a bad thing. After primarily making smaller, less showy dramas like Little Odessa, We Own The Night and The Immigrant – some of which, to the best of my knowledge, never even got an official UK release – he finally got more people’s attention in 2017 with the historical epic The Lost City of Z, a grand and passionate adventure movie that called back to the early works of Michael Cimino and Francis Ford Coppola, and which brought the filmmaker more into the fold as a secret weapon when it comes to making proper epics in an age of domineering visual effects and franchise fodder.

It’s partly because of the warm reception that film received, that he’s been given access to a much larger budget in order to create his biggest, and most accessible, movie to date, with virtually carte blanche to approach it how he feels is best. A wise choice, because the resulting film Ad Astra feels like a movie no major studio would usually ever give the greenlight to, or at least retain a firm grasp over creative control if they did, yet here it is in all its ambitious glory, and it is a fascinatingly studious film that explores themes as deep as the vast reaches of space itself.

The film is set in the near future, where space travel has become more normalised – rockets to the moon are operated like airplanes, even operating under the Virgin conglomerate – and mankind is attempting to reach out and make contact with other extraterrestrial life. When a series of surges suddenly hit the planet and cause major power outages and even deaths, astronaut Roy McBride (Brad Pitt) is recruited onto a classified mission to head far out into space and locate the source of the surges, which is what remains of a fact-finding mission called the Lima Project. The catch, however, is that the Lima Project was operated by Roy’s father Clifford (Tommy Lee Jones), who might still be alive after years of being in space, but who might also be behind the deadly surges.

Although the trailers are trying to sell this movie as some kind of sci-fi action blockbuster – they even use triumphant orchestral music that sounds a lot like the score to the recent Star Trek movies – it’s actually much more of a contemplative drama that happens to be set in space; think less Star Trek, and more Interstellar by way of Joseph Conrad. The Conrad comparison is no coincidence, as Gray clearly takes after the author’s Heart of Darkness for inspiration just as Coppola did with Apocalypse Now, with both that and Ad Astra being about people being sent on a mission deep into unknown territory that begins to psychologically test them, and both being wildly ambitious projects that simultaneously bring out the best in each filmmaker and also shows newer sides to them that none of their previous films were able to. In the case of this film, the psychology behind such a mission is explored in intriguing detail; Pitt’s Roy is introduced as someone who has been trained to compress their emotions, so that they can remain calm and not get too distracted during some of the dangerous tasks they must do when out in space. With the central mission obviously being quite personal to the character, what with the main target being his own absent father, his ability to keep it all together is tested throughout, and what the movie does that’s very interesting is that it shows this guy consistently about to crumble underneath the pressure and emotional weight that comes with it, but his duty compels him to rather damagingly keep it all bottled up, so half of the intensity of this film is just waiting for it all to finally come spilling out, which could happen at any given moment. Pitt gives a very layered performance here, doing a lot of acting with his eyes as a means to cope with the fact that he can’t express himself any other way, and he really does wonders with the rich material that’s been given to him.

It’s also a movie where you can not only be fascinated with the story and the emotional arc of the main character, but also with the vast universe that has been created here. We see how the Moon, for example, has become like a shopping mall, complete with chain restaurants like Applebee’s and large neon signs as though it were Las Vegas, and even further out on Mars there are facilities in place that are designed to relax people that have travelled so far from Earth. It’s all unnervingly plausible, right down to how other crew members on board the ship that McBride travels on talk as though they were actual professionals and not like the kind of schlubs you’d find in an Alien movie, and it proves that Gray really has thought of just about every possibility when it comes to creating this near futuristic society, which makes it all the more conceptually awe-inspiring, especially when he brings it all to life with some dazzling visual effects and cinematography.

As much as I did like this movie and appreciated some of the themes and tones it was going for, I wouldn’t say that I liked it as much as The Lost City of Z, if only because that film felt a lot grander and even a little more ambitious. That isn’t to say that this movie isn’t going for broke either, but it does feel similar to other space-set movies from the past few years like Gravity, Interstellar and First Man, whereas The Lost City of Z felt more unique at the time. There are also sequences in this movie which can sometimes feel out of place, like an investigation on an abandoned spacecraft that suddenly turns into a creature horror movie, or an action scene which feels like it was plucked straight from Mad Max: Fury Road and onto the surfaces of the Moon, which don’t always fit with the tone that the rest of the film is going for.

Regardless, James Gray has now made two accessible movies that are far different to most other studio fare out there at the moment, both of which are stunning in their own ways, and let’s hope he stays true to his ambitious roots for further, perhaps even more accessible, projects which could very well position him as an auteur to take seriously.

Ad Astra is a fascinatingly studious sci-fi epic that explores its rich themes of emotional isolation with ambitious passion, and positions James Gray as a filmmaker to seriously consider as a new leading voice in big-budget cinema.

Want to decide what the movie’s like for yourself?
Check out Ad Astra showtimes in London
via