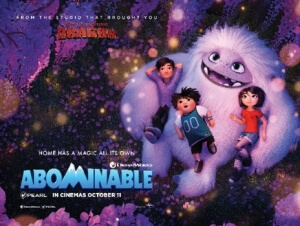 BASICALLY…: Teenager Yi (Bennet) discovers a Yeti hiding on the roof of her building, and sets out on a journey to return him home on the top of Mount Everest…

It’s good to be a Yeti right now in the film industry, because within the space of a year the mythical creature has had not one, not two, but THREE animated family films revolving around it. Last October, Smallfoot came and went; then earlier this year, the criminally underseen Missing Link proved to be yet another winner for Laika Animation; and now Abominable, the latest collaboration between DreamWorks Animation and their Chinese counterpart Pearl Studio (the two had previously worked together on Kung Fu Panda 3), sees the Yeti once again at the forefront of a bright and colourful movie that kids will undoubtedly fall in love with.

This movie, though, perhaps plays it the most safe out of all three of them; whereas Smallfoot aimed for a more cartoonish approach with musical numbers and a few interesting twists, while Missing Link was more mature and tackled some sweet human themes in typical Laika fashion, Abominable takes a much more familiar template – if you’ve ever seen E.T., Bumblebee, Earth to Echo and pretty much any movie that sees a young person befriend a strange creature, then you’ll know which template I’m referring to – and pretty much just runs with it. What it lacks in pure originality, though, it makes up for with some stunning and creative animation, and a tremendous sense of heart that will set anyone of any age on the right path.

Set in China, teenager Yi (Chloe Bennet) is shocked to discover a Yeti on the roof of her apartment building in Shanghai, having escaped from a government facility. Soon, Yi and her friends Jin (Tenzing Norgay Trainor) and Peng (Albert Tsai) are whisked away on an adventure with the Yeti – named Everest – that takes them across China and all the way to his home at the peak of, naturally, Mount Everest. They must do this whilst also keeping ahead of the wealthy Burnish (Eddie Izzard) and zoologist Zara (Sarah Paulson), who want to re-capture Everest and show him to the world.

It’s the kind of plot that has been done so many times in family movies that it’s hard to get too excited about it anymore, and there are many times in Abominable where you can tell everything that’s going to happen because it’s following this tried-and-tested formula way too closely. It’s probably the weakest part of the movie, which is a shame because considering DreamWorks’ fairly strong track record as of late you’d think that they’d have enough resources to come up with new and inventive twists to this story, but instead they’re committed to just keeping things in order. You have to wonder if that decision came from the Chinese side of the production, given China’s reputation of heavily censoring anything they consider to be straying from the path (in fact, South Park just did a whole episode on that subject, resulting in the show’s swift ban in the country), but even if it that were the case it’s still a generic plot which doesn’t feel like it’s been altered in any way, so it’s ultimately lacking for anyone who’s over the age of nine.

For anyone who is around that age or under, however, this will be a cinematic delight. Colourful, energetic and rich with kid-friendly humour, the movie will entertain little ones who are looking for something pretty to look at for just over an hour and a half. Beyond that, though, the animation is at times stunning to look at; the photoreal landscapes of China don’t always mesh well with the cartoonish designs of the main characters, but when the scene calls for a quieter and more atmospheric tone, they work wonders to transport viewers to a luscious computer-generated reimagining of a vast and gorgeous landscape. The Yeti at the heart of the film is undoubtedly adorable, fluffy and full of youthful energy, with a design that’s part Wompa from the Star Wars series and part Toothless from DreamWorks’ other animated classic How To Train Your Dragon; children will certainly fall in love with it, and adults will appreciate the creativity that comes with its magical powers, including set-pieces that involve giant blueberries and massive tidal waves made out of flower petals.

It’s a harmless movie, and the filmmakers clearly have good intentions when focusing on the heart-felt moments, but it’s not much more than a completely fine movie to put on for the kids. I don’t see adults coming back to this one like they did the How To Train Your Dragon series, citing it as an example of the very best that DreamWorks can be, when in reality it’s definitely gorgeous to look at but rather thin to pick apart from a story aspect. If you want something that has both, then definitely check out Missing Link, which feels like a much more ambitious and mature version of this film. I can, however, see this becoming something of a hit with the intended audience, as it is a very colourful and sweet-natured adventure film that children can easily resonate with, and who are we to deny children a movie like this simply because it’s not as deep or complex as we would rather have it?

It’s definitely far from abominable, but if it had a more original story then it could have become something as mythical as the Yeti itself.

Abominable is a harmless and sweet-natured family adventure that children will probably be more receptive of than adults, due to its colourful and at times stunning animation, but the lack of a truly original story that takes risks and feels different to many of the other films that have most famously used this template cause it to not feel as fresh or ambitious to the older members of the audience.

Want to decide what the movie’s like for yourself?
Check out Abominable showtimes in London
via