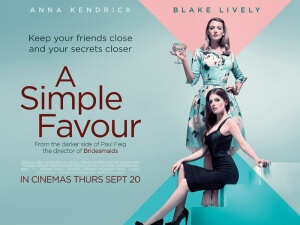 BASICALLY…: Single mother Stephanie (Kendrick) befriends mysterious fellow mom Emily (Lively), only to be drawn into her disturbing past when she suddenly goes missing…

Here’s a fun fact that not many of you will probably know (and one that I certainly never knew until doing research): before he made a name for himself directing hit comedies like Bridesmaids, The Heat, Spy and the 2016 Ghostbusters reboot, not to mention working on several popular comedy shows like The Office, Arrested Development and 30 Rock, Paul Feig made his film directorial debut in 2003 with a film called I Am David, a drama that saw a young boy embark on a post-WW2 mission to reunite with his mother after escaping from a Stalinist labour camp. Though not well-received by critics with a 38% approval rating on Rotten Tomatoes, it marked a surprisingly mature turn for a guy who up until then was best known for creating the short-lived cult series Freaks and Geeks, and looking back on it now after Feig’s greater success with those aforementioned comedies, it’s surprising that he started out by making something decidedly non-comedic and as straight-laced (if corny and clichéd) as they come.

In a very strange way, his first film ties in a little bit to his latest movie A Simple Favour, an adaptation of Darcey Bell’s novel of the same name; though they are both radically different from one another, both adopt tones that are wildly against what we now associate Feig with, and are also filled with stories and characters that largely do not fit the mould he is usually known for. However, A Simple Favour shines through because while it certainly has a darker edge to it than all of his other films in the past, it retains Feig’s incredibly infectious sense of humour as well as his adoration for well-written and fascinating female lead characters that are not defined by the men in their lives. It’s also one of his best movies in general, as this is a charming, intriguing and highly entertaining mystery that’s got some sinister parts to it, but still never fails to make you laugh.

The plot sees Stephanie Smothers (Anna Kendrick), a widowed single mother who fronts an online housewife-themed vlog, meet beautiful and mysterious fellow mother Emily Nelson (Blake Lively), whose son Nicky (Ian Ho) instigates a playdate with Stephanie’s son Miles (Joshua Satine) and causes both women to get to know each other while their kids play together. Stephanie soon finds herself compelled by Emily’s extravagant lifestyle, from the fancy house she lives in, to her impeccable fashion sense, to the way she makes martinis like a professional mixologist, all the way to her equally charming husband Sean (Henry Golding, last seen being a breakthrough movie star in Crazy Rich Asians), all of that despite Emily’s obviously vulgar and secretive personality. One day, when Emily asks Stephanie the titular simple favour to pick her kid up from school, only for Emily to never return, Stephanie turns private investigator to try and solve the mystery of Emily’s whereabouts, uncovering some disturbing secrets about her past, and getting a little too close for comfort with Sean, in the process.

The fun thing about this movie is that it’s a mystery film, with hints of a thriller not unlike Gone Girl or The Girl on the Train, that’s done as though it were taking place in the same universe as something like Bridesmaids or The Heat. Feig doesn’t necessarily direct the film like it’s a straightforward serious flick like those films were, nor does the cinematography by John Schwartzman really make it look as bleak or intimidating either; it’s shot and directed exactly like a Paul Feig movie, which means it’s light-hearted and colourful without being too obnoxious about itself, but at the same time the material he’s working with contains such twisted developments that the tone and style he’s bringing to it would ultimately hinder the film, if it weren’t for how he manages to perfectly blend both the dark and the comedic like the ingredients in one of Emily’s many martinis. This is very much a dark comedy, but it’s one that you could easily see existing in the same continuity of any one of Feig’s more recent films because, as disturbing as some of the reveals can be – and not just those about Emily’s life, either; Stephanie’s got one or two messed-up secrets of her own – it is also a very funny movie with more laughs to be found in this film than most of the more straightforward comedies I’ve seen this year. Both light and dark tones are handled so well by Feig that you honestly respect him as a filmmaker even more than you probably were, and it takes a great talent like him to perfectly combine the two without feeling like he’s out of his element, while also delivering a very entertaining movie with twists and turns that you greatly enjoy experiencing.

Like Feig’s more recent movies, its leading female line-up is one hell of a pairing, in this case being that of Anna Kendrick and Blake Lively, two actresses who have both in the past shown that they are extremely capable and game comedic performers while also showing that they are also effective in more dramatic roles whenever called upon, and here they make an impeccable on-screen duo that’s impossible to resist. Kendrick has always been a sweet presence on-screen, from her star-making turns in the Pitch Perfect trilogy to her Oscar-nominated turn in Jason Reitman’s Up In The Air, and here she gives the definitive Kendrick performance; sparky and lovable while also being very funny in numerous scenes where her strengths in physical comedy come into play, but also emotionally strong and sympathetic in some of the film’s heavier moments where she reminds us all that, underneath the light-hearted charisma and musical talent most popularly shown through that cups song from Pitch Perfect, she is a very capable dramatic actress. Lively, meanwhile, is someone I’ve always liked whenever I see her in things, from scene-stealing supporting roles in movies like The Town to full-on lead parts in The Age of Adaline and The Shallows, but her performance in this film is probably the most I’ve loved her in a movie; she’s charismatic as all hell, revelling in her character’s darker tendencies, and though her character has a very secretive personality she’s no wet blanket thanks to a strong sense of humour that Lively easily inserts into the character. As you find out more about Lively’s character, the more you realise that this is one seriously irresistible femme fatale that the likes of Hitchcock back in the day would have been jealous not to have nabbed for one of their movies, and Lively is so much fun in the role and her character such a rotten treat that she is more than worth the ticket price alone. You shouldn’t forget about Henry Golding either, who with two really solid movies under his belt already between this and Crazy Rich Asians is really starting to become the next big movie star is Hollywood will allow him to be, and seeing how much of a screen presence he has here it would not shock me to see his name come up several more times over the next few years.

There are surprises in this movie that you really need to see for yourself, but the only spoiler I shall give is that A Simple Favour, thanks to the combined efforts of director Paul Feig and stars Anna Kendrick and Blake Lively, is some of the most fun you’ll have at a film all year.

A Simple Favour is an incredibly fun and entertaining dark comedy which benefits from director Paul Feig inserting his strong sense of humour into a thriller plotline, and also from two definitive performances by the ever-wonderful duo of Anna Kendrick and Blake Lively.