DIRECTORS: Will Becher and Richard Phelan 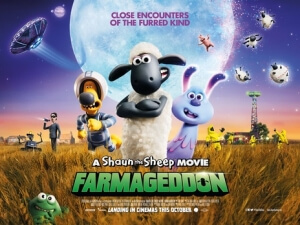 BASICALLY…: Shaun the sheep (Fletcher) comes across an alien, and with his farmyard friends sets out to bring it back home before the government finds it…

Can we acknowledge the fact that Shaun the Sheep now has more feature-length movies to his name than Wallace and Gromit do? Although, that just speaks volumes to how well the character has done on his own; since making his debut in their Oscar-winning short A Close Shave, the eponymous sheep has gone on to launch a franchise that consists of a hit children’s television series (and a spin-off featuring young lamb Timmy), an Oscar-nominated movie, several video games, a stage show, and even his own theme park in Sweden.

Needless to say, the little sheep is doing very well for himself, so much so that the idea of introducing a more sci-fi concept into the mix isn’t quite as ridiculous as it may seem. After all, with the smart creative team that it has, A Shaun The Sheep Movie: Farmageddon manages to work with it to serve up a solid follow-up to the successful first film, with all the trademark visual gags and sweet nature of a standard Aardman film that will please younger audience members, and delight some of the older ones too.

The film kicks off when Shaun and the rest of the flock unexpectedly meet Lu-La, an alien who has arrived on Earth unexpectedly in a UFO. In typical fashion, Shaun sets out to reunite the young alien with her spaceship and her family, before a shady government organisation can get their hands on the creature.

It’s a movie designed to appeal mostly for young children, so of course the story isn’t that tricky to figure out, nor should it be; the real grab is the delightful sense of humour that Aardman has become best known for, not to mention the always-stellar Claymation animation that brings these plasticine figures to life, and the movie delivers on both fronts. As ever, everyone in this apparent parallel universe – I assume it is so, because there is a clip of Wallace and Gromit’s first adventure A Grand Day Out playing on the television, and there is no way that they can exist as characters here as well as in fictional form, otherwise this universe would explode – speaks entirely in unintelligible grunts, so it is up to the visual gags to move the story and the comedy forward. If you’ve seen the previous Shaun the Sheep movie (handily named Shaun the Sheep Movie in a slight grammatical nuisance that’s bugged me ever since it first came out), then you’ll probably already know that this creative team is more than able to provide endless visual material for the audience. They do it again here, with several visual and audible nods to sci-fi films from Close Encounters of the Third Kind to 2001: A Space Odyssey, all done with the standard Aardman wit and timing, and many of them raising a number of laughs from children and adults alike.

Like the first film, there’s just as much for adults to enjoy about it than there is for kids. For one, the animation is on-point as it always is, and it seems like the folks at Aardman had plenty of fun working with the sci-fi aspect of the script, because it lends them plenty of new opportunities to get creative and even a little magical. Adults will certainly be more knowing of the sci-fi references than children, but there are plenty of other sight gags that both age groups can laugh themselves silly over – there’s a great gag involving a bull and a china shop, and a hilarious sequence set in a supermarket – as well as a number of times when they can easily sympathise with the fun and likeable characters. The little alien Lu-La is a colourful creation, figuratively and literally, and children can easily relate to the new character due to its childish and curious nature; the usual gang, from Shaun to Timmy to Bitzer the dog, has charm to spare and they’re always fun to watch. These characters easily score a lot of laughs without even uttering a single word, and as the movie reaches its sweet climax they might even tug a little bit at your heartstrings.

The movie is a standalone sequel, so don’t expect any callbacks to the previous movie, but it makes little difference in how you view this one, because you’ll still be able to enjoy it without even seeing the first film. The focus here is much more on the comedy than the emotional impact of the story, meaning that some of the more heartfelt themes of the previous film aren’t as strong as they previously were, but the movie has a lot going for it in the comedy department anyway that it’s not that jarring of a transition. It still manages to entertain the audience, both young and old, and give them a wholesome movie experience that’s incredibly easy to digest while also not being too dumbed-down for them either. It’s definitely a worthwhile movie to take the kids to see during half-term, more so than Abominable which wasn’t bad but wasn’t anything special either; this film has similar plot beats that the DreamWorks Animation movie had – which is ironic, considering that the studio was once the home to Aardman’s feature films – and just does them with a lot more thought, a stronger sense of humour, and a truly universal appeal that’s easy to like and without a cynical bone in its body.

In just two movies, Shaun the Sheep has proven he’s a character who can hold his own outside of the world of Wallace and Gromit, and can delight children of all ages without, again, saying a word.

A Shaun The Sheep Movie: Farmageddon is another delightful big-screen adventure for the titular sheep, with this one relying more on comedy than heartfelt emotion to carry itself, which it manages to do very well with strong visual gags, stellar animation, and a very sweet nature that’s hard for any child or adult to resist.

Want to decide what the movie’s like for yourself?
Check out A Shaun The Sheep Movie: Farmageddon showtimes in London
via