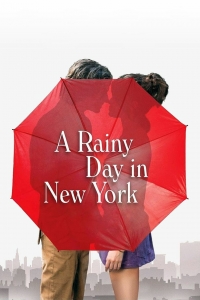 BASICALLY…: A young couple (Chalamet and Fanning) find their relationship tested during a romantic trip to New York…

Woody Allen is not a figure many people are too keen to get behind at the moment, with allegations of historical sexual abuse against the filmmaker resurfacing in the wake of the #MeToo movement, but as someone whose job is to critique people’s work it’s important for me to approach anything new that comes from such a person with an objective mind. While it’s hard to completely eradicate the idea that Allen might be just as guilty as he is claimed to be, I am still a professional at the end of the day who can still watch a film of theirs and write about its strengths and weaknesses without tilting too much towards a biased opinion.

That being said, when it comes to reviewing Allen’s latest film A Rainy Day in New York, it’s as though I am lost for words, because there’s not really a whole lot to say about it. It’s a typical Woody Allen movie with most of the familiar quirks and tropes, from neurotic lead characters to an inexplicably starry ensemble cast, and if that’s what you’re looking for then you’ll feel just as much at home as he clearly does. However, its lack of fresh ideas and themes which feel outdated for today’s audiences make it a somewhat hollow entry, especially next to his more refined works.

The film focuses on two college sweethearts from privileged backgrounds, Gatsby (Timothée Chalamet) and Ashleigh (Elle Fanning), who decide to take a romantic weekend trip to New York when Ashleigh is assigned to interview respected filmmaker Roland Pollard (Liev Shreiber) for the college newspaper. However, their plans are soon derailed when Ashleigh becomes embroiled in the numerous affairs of Pollard, his writer Ted (Jude Law) and famous actor Francisco Vega (Diego Luna), leaving Gatsby to wander the streets of New York and encounter faces such as Chan (Selena Gomez), the younger sister of his ex-girlfriend, all while torrential rain pours down from the sky.

Though it’s far from the least tolerable of Allen’s more recent films – it’s easier to sit through than his last film Wonder Wheel – there doesn’t seem to be a whole lot of drive or passion in it either. It feels like it was made just so that Allen could continue his now-interrupted streak of making and releasing a film every year, without putting a whole lot of thought or imagination into a story that continuously stalls with one episodic misadventure after another, or characters who often come across as insufferably pretentious. Timothée Chalamet – who decided to donate his salary on this film to charity, along with co-stars Selena Gomez and Rebecca Hall – is playing a character that you wouldn’t want to be stuck in a lift with, let alone the streets of New York; there’s something incredibly off-putting about the ridiculously named Gatsby Welles, whose tweed jacket-wearing and cigarette holder-flaunting habits reek of smug self-satisfaction as he constantly spews intricate dialogue that doesn’t feel remotely believable for someone of his age, even with his wealthy background. Elle Fanning’s Ashleigh, meanwhile, is a giggly and flirtatious airhead with little personality other than being a modern representation of Marilyn Monroe if she decided to play Lois Lane in a Superman movie, complete with a constant deer-in-the-headlights expression that makes her seem even more scatter-brained. It’s hardly the actors’ fault, they’re just playing the roles as created and guided by Allen; but their combined charm and charisma can’t work to bring to life a couple of thinly-defined and at time testing leads who you really don’t care that much about.

It seems like Allen does not care a great deal about them either, because he largely uses them as pawns so he can deliver the same, familiar tropes he’s been doing for nearly fifty feature films now. From intricate dialogue to highly convenient romantic sub-plots, he relies far too heavily on stuff that worked for him in the past instead of moulding something new and interesting for a more modern audience, making it a largely dull re-tread of his greatest hits with half as much enthusiasm as something like Annie Hall or Midnight in Paris. It is such an overly familiar display of typical Woody Allen movie clichés that there are not one, not two, but three Allen surrogates (i.e. actors who perform in a strikingly similar manner to Allen’s own brand of delivery) including Chalamet – whose entire performance seems to be made up of Woody Allen impressions – Liev Schreiber as an older, insecure filmmaker who looks upon the significantly younger Fanning as a potential muse (erm…), and Jude Law as a writer whose own high-strung personality quirks could easily be interchanged with that of either Chalamet’s or Schreiber’s.

The whole thing is an aggressively safe outing for the 84-year-old filmmaker, who seems to be all too comfortable relaxing in his own personal safety net than take any new creative risks. Arguably, with public opinion of him being far less favourable than it once was, it’s perhaps sensible that he’s not attracting too much attention at the moment, but it’s still a little disheartening to see a once-respected filmmaker rely far too heavily on old tricks instead of learning new ones.

A Rainy Day in New York is a mediocre and aggressively safe film by Woody Allen that features numerous familiar tropes of his, but with half of the drive and ambition that propelled him into the limelight, and a script that feels incredibly light on both story and character due to its obsessive desire to stick to the director’s traditional clichés. It’s one for Woody Allen completionists only.