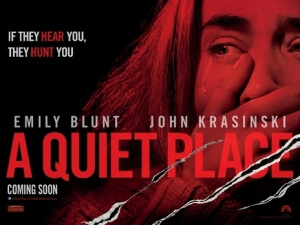 BASICALLY…: When mysterious creatures that hunt by sound take over the world, a family must live in total silence or else be found by the monsters…

Over the years, Michael Bay’s production company Platinum Dunes has developed a slight reputation for being behind a number of unnecessary and largely lacklustre remakes of classic horror movies, including but not limited to The Texas Chainsaw Massacre, Friday the 13th, A Nightmare on Elm Street and The Amityville Horror. Though it’s also been behind a few more original concepts in the genre – mainly the Purge series and both Ouija movies – it’s mainly been seen as the studio that largely lacks originality and any sense of ambition, kind of like how most people view Bay nowadays.

With that in mind, it’s not only shocking that Platinum Dunes is now behind one of the most original and seriously intense horror movies of its type in recent years, but that A Quiet Place – if it plays its cards right, especially in a universe where Get Out managed to receive numerous Oscar nominations including Best Picture – could seriously score that most unheard of and frankly bizarre statement: Michael Bay, Oscar-nominated producer.

Of course, that could very well not happen, but again nobody thought that Get Out would last so long in the public memory all the way up to Oscar night, and look where it ended up. Now, I’m not exactly saying that A Quiet Place is perhaps as smart or as socially relevant as Get Out, but it’s a damn impressive ride that’s expertly made, wonderfully thought out, brilliantly acted, and incredibly scary for audiences who either see a hint of social commentary underneath the chills, or don’t. Either way, it’s a sure-fire hit.

The film opens with a title card reading “Day 89”, and already it’s clear that something devastating has gone down; we learn that a horde of mysterious creatures that hunt only by sound have emerged, which means that anyone or anything that makes even the tiniest noise is pretty much done for. We meet one family that has been forced to live in total silence, including patriarch Lee (John Krasinski, also the film’s director and co-writer), his wife Evelyn (Krasinski’s real-life spouse Emily Blunt) and their children, Beau (Cade Woodward), Marcus (Noah Jupe) and Regan (Millicent Simmonds), the latter of whom is deaf and gives the family an advantage with their skills in sign language with which they communicate. Not long after we meet this surviving family – right before the main title pops up – something terrible happens, and we flash forward to their lives a year or so later, where they have mostly adapted to their quiet way of living whilst avoiding the creatures’ rampage. However, there’s one huge dilemma that could very well jeopardise everything; Evelyn is pregnant, and as we all know delivering a baby is not the most peaceful experience.

Where things go from there, and even leading up to that point, is completely thrilling and wildly unpredictable; Krasinski and fellow writers Scott Beck and Bryan Woods have developed a terrifying situation where literally anything and anyone could unintentionally make a sound at any given moment, and it could very well mean certain death, which given that there aren’t that many characters on-screen means that any one of them, whether it’s the parents or the children, could be caught and killed by these horrifying creatures without any warning whatsoever. It’s a well-written script that allows you to really feel for and get a clear understanding of these characters, even when roughly 80% of their dialogue is through sign language, and it’s so tightly directed by Krasinski – on only his third film as a credited director – that the very idea of sound being as deadly as anything suddenly makes mundane things like a creaky floorboard or a lantern being knocked over seem like the scariest thing. You’re totally on board with everything this family does, because they seem like a real family unit, and because the acting is so great from everyone, from Blunt and Krasinski using their real-life relationship to effective use in this film, to an astounding central performance by deaf actress Simmonds who is the film’s secret weapon in almost every capacity.

The way that this film uses sound, or more specifically the lack of it, is quite inspired; everything in the background and foreground is either amplified or dialled down to always give a strong sense that anything, even the mildest sound, could spell certain doom at a moment where it’s least expected. In addition, whenever we see things from deaf Regan’s point of view, there is absolutely no sound at all, and it can be this way for entire scenes or even just quick cuts to her character in the editing. Admittedly, the musical score that plays over scenes, while nice, doesn’t exactly feel like it needed to be there and one wonders if it would have been far more effective without a score at all, but it is used sparingly and allows the sound editing and mixing to play a much larger role in the film, especially in scenes that really ramp up the tension and leave you just glued to the edge of your seat. The entire second half of this movie is a stern and fearful exercise in creating effective and worthwhile movie tension, which is made possible thanks to the strong direction on Krasinski’s part as well as the fact that by this point we have grown to really like these characters, which really makes us not want to see any of them get killed off for making noises beyond their control.

Stunning in how it’s both written and executed, A Quiet Place really sets the bar high for horror movies coming out for the remainder of the year, and is a stern reminder that we are still living in a horror renaissance that is quickly overshadowing the usual amount of crap we get in this genre (case in point: next week’s Truth or Dare, which somehow I doubt will be as good as this).

A Quiet Place takes a simple but terrifying concept and intelligently expands on it to create a horror movie that is effective in its scares, its strong script and direction, and terrific performances all across the board. It’s definitely one to make noise about.