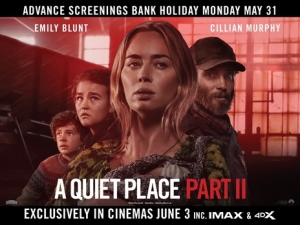 BASICALLY…: Evelyn (Blunt) and her children (Simmonds and Jupe) must venture out into a world overrun by creatures that hunt by sound…

Tickets had just gone on sale for A Quiet Place Part 2 back in mid-March 2020, when suddenly all cinemas were shuttered and virtually every major release was pushed back to the following year. It really has been such a long wait for this film to finally screen to the public, especially given the hype surrounding its initial red carpet premiere (before the film was, like most others, heavily delayed by the pandemic) and the fact that it was a direct follow-up to a well-received box-office smash hit, that somehow there is a fear that the movie might not live up to some people’s expectations after all this time.

As soon as the film begins, though, most of those fears are quickly dashed as returning director John Krasinski – who also writes this film, fully taking over from the original’s co-writers Scott Beck and Bryan Woods – delivers a pretty solid sequel to an already strong horror movie, expanding on the initial terror created by the main monstrous threat as well as the desperate need to stay as quiet as possible. Those hoping for a much deeper dive into certain other aspects, however, may find themselves with little to raise a ruckus about.

Before we pick up right where the first film left off, we get an extended prologue depicting “Day 1” of the initial invasion of creatures that hunt purely by sound; this sequence sees director Krasinski (who also briefly reprises his role as slain father Lee during this segment) utilise his acute ability to draw tension and suspense in scenes that slowly build to the chaotic slaughter, including a one-take shot of Emily Blunt’s Evelyn narrowly avoiding the invading creatures that takes place entirely within her car. The cinematography and editing, as well as the performances, in this entire sequence – and throughout the rest of the following movie – is rather excellently done, and shows Krasinski’s innate talent for building up sheer terror before then delivering a seriously chilling payoff.

Then, we get to the real structure of A Quiet Place Part 2, which again takes place exactly where the first film ended, after a creature attack has left Evelyn and the now-dead Lee’s family farm devastated. With her children Regan (Millicent Simmonds) and Marcus (Noah Jupe) – as well as her newborn baby, kept hidden and quiet in a box with an oxygen tank – in tow, Evelyn sets out to find other survivors and possibly a safe haven for her and her kids. They soon encounter Emmett (Cillian Murphy), one of Lee’s old friends who now lives alone in an underground bunker, and who reluctantly helps the family on their quest to not only find somewhere where they’ll be safe from the monsters’ attacks, but to also utilise their newfound ability to subdue and destroy the beasts using high-frequency sounds and a shotgun.

Like the first film, A Quiet Place Part 2 is a rather small-scale movie, but is all the better for it. This isn’t the kind of sequel like Aliens which suddenly shifts the focus onto numerous other characters as well as our already-established protagonists, and also adopts a more action-oriented vibe and tone; instead, this sequel keeps the momentum to a reasonable low, maintaining its focus on the right characters as well as only a handful of newer ones, all while feeling like it’s still in the same universe as the first Quiet Place movie. The scares are still effective and driven by both atmosphere – provided by the bleak cinematography – and careful sound design, which takes advantage of certain characters’ disabilities for decent concepts; Regan, like actress Millicent Simmonds, is deaf, and the film frequently cuts out the audio to put the audience in that same void of silence as she finds herself in, which provides a number of strong character moments as well as that masterful building of tensions that Krasinski has really gotten the hang of.

For the most part, the lack of world-building in lieu of a focus on what the main characters are experiencing through their own eyes is a refreshing sequel approach which keeps the themes alive while maintaining some form of ambiguity when it comes to other things. However, it does reach a point where you do find yourself wondering how certain things in this post-apocalyptic society work, and why select groups of people have apparently taken it upon themselves to form their own creepy community à la The Hills Have Eyes or that recent Wrong Turn reboot, after just over a year of this monster invasion. There is a strange segment in this movie where characters encounter some feral humans that have laid out noisy contraptions to attract the creatures, but this is the only part of the movie we see these people, and it feels like there should be more of an explanation as to why and how these people ended up this way after, again, just over a year of everything happening. Perhaps this will be looked into a bit more in future sequels – and given the rather abrupt cliffhanger this movie leaves you on, it’d be shocking if they didn’t make at least one more movie in this series – but within the context of this standalone movie, it’s a bizarre addition to this lore that maybe needed more attention than it got.

The movie, as a whole, does work, because you are invested in these characters and you do feel for them as they find themselves trapped in seemingly hopeless situations (one character gets their foot caught in a bear trap, and it’s absolutely as painful to watch as it surely is for that character to experience), and the world that has been established is a sinister one that is legitimately scary in places. That being said, it’s perhaps a less focused film than the first one was, because there are times when we’re cutting away from one character’s separate story strand to the next, which leaves little room for some of the others to shine as much as they did before (Emily Blunt is largely side-lined in this movie, although she does get a number of great moments to shine). Even still, A Quiet Place Part 2 is firm material built on a solid foundation, and certainly gets you excited for any other quiet outings in the future.

It’s taken over a year to finally see it, but the wait has been (mostly) worth it.

A Quiet Place Part 2 is a strong and effective sequel that establishes director John Krasinski’s firm grasp on building tension and suspense, although it perhaps could have further expanded on elements of this frighteningly quiet world.

A Quiet Place Part 2 is showing in cinemas nationwide from Thursday 3rd June 2021, with preview screenings on Monday 31st May 2021 – click here to find a screening near you!