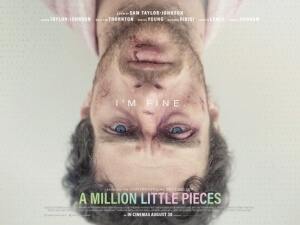 BASICALLY…: A young drug addict (Taylor-Johnson) admits himself into a clinic where he comes across several interesting characters…

“Based on the controversial best-seller,” says both the trailer and poster for A Million Little Pieces, but there is another way to describe James Frey’s infamous memoir about his time in drug rehab: decisively untrue. For those unaware of the story, Frey originally claimed that his debut novel was a personal recollection of events he had experienced, but evidence later surfaced that he had indeed made the majority of it all up, and following a now legendary interview with Oprah Winfrey the reputation of both the author and the story diminished significantly.

However, two major things still managed to come from this whole mess: a South Park parody episode featuring the show’s most polarising character Towelie, and now a feature-film adaptation that brings the story that started it all to the big screen. Funnily enough, the one with the towel was a lot more entertaining.

In the film as it is in the book, James Frey (Aaron Taylor-Johnson) is a drug addict who wakes up on a plane headed to a rehab centre, at the bequest of his older brother (Charlie Hunnam). Forced to attend group sessions and obey the rota of daily chores, Frey is obviously reluctant to be there, but as time goes by he realises that in order to reclaim a healthy, sober life, he needs all of the help that he can get, and he acquires it through the friendships he forms with some of the other patients, including an older flamboyant man played by Billy Bob Thornton, and a female addict named Lilly (Odessa Young) with whom he begins to form something more than a friendship.

The adaptation is something of a personal project for both Aaron Taylor-Johnson, who not only stars but also co-wrote the screenplay, and his real-life partner Sam Taylor-Johnson, who directs and co-writes. The husband-and-wife duo spent 18 months together writing the script, mining whatever they could from the source material, and shot the film over the course of 20 days, with some actors given just a couple of days’ notice before they had to come on set and know their lines by heart. It’s a pretty hardcore way of running things, and props to both Taylor-Johnsons for getting this film made in a relatively short amount of time – barely even three weeks – but unfortunately, there are times where you can tell that this was a rather rushed production. Scenes will just suddenly end, pivotal details about characters’ backstories are largely glossed over, and some of the staging feels like it wasn’t all that thought through; it seems like there is a large chunk of this story missing, and I don’t know how it compares to the book itself which I never read, but I wouldn’t be surprised if there’s a lot more in there that simply didn’t make it into the film for whatever reason.

Then again, with the way that this story is structured and the way it’s told, I also wouldn’t be shocked to find that the novel is just as all over the place as the movie is. When tackling a subject as weighty as drug addiction, it feels very heavy-handed, almost too much like a cheesy after school special where all that anyone talks about are the dangers of drugs and the need to be healthy again, and for a while the film just feels like a compilation of scenes that are nothing but that. The intentions are certainly good, but sometimes the movie has all the subtlety of a sledgehammer to the groin; an early scene has the main character imagining himself dancing in a corridor that’s slowly filling itself up with what can only be described as a poo waterfall, and later on there’s a shot where he “sees” his food slowly shrinking and decaying right in front of him. It’s visual metaphors like that which on the one hand make me respect the vision by director Sam Taylor-Johnson, who is also an artist and accomplished photographer, but on the other leave me frustrated that they’re used in such a film-school type of way, particularly whenever they serve to drill further in a point that the audience already gets.

What just about makes it work, though, is Aaron Taylor-Johnson’s lead performance which to say is completely committed is to undermine how much he – figuratively and literally – goes balls-out here. From the very first scene, the actor is wholly immersed in the destructive lifestyle of his character, and in a strange way you understand where he’s coming from when he says he doesn’t want to be there in rehab getting better, even if the massive amount of drugs and alcohol in his system have warped his mind enough for him to think that. He is easily the best part of the movie, and luckily he is in a vast majority of the scenes if not all of them, so whenever there is a notable fault in logic – the men and women are not allowed to fraternise, yet they all share the same communal and dining areas? That’s just asking for trouble right there, even if it is a common practise in these facilities – or if a scene feels undercooked or rushed, there is at least his outstanding performance there for you to latch onto during the film’s many, many flaws. As for co-stars, Billy Bob Thornton is a stand-out, and Giovanni Ribisi has a memorable small role as a very strange inmate.

This is the Taylor-Johnson show, though, and that can be used to describe both Aaron and Sam; here you have a creative duo that has clearly tried their hardest to bring this source material to life, but while it’s not entirely successful there are still some good things that prevent it from being a complete train-wreck. But again, the South Park parody with the talking towel was a lot more entertaining than this.

A Million Little Pieces is a structurally uneven adaptation of the infamous James Frey novel, which opts for overly obvious metaphors and a heavy-handed approach to its topics of addiction, but is held together just enough by a fiercely committed lead performance by Aaron Taylor-Johnson, who co-writes with director and real-life partner Sam Taylor-Johnson.

Want to decide what the movie’s like for yourself?
Check out A Million Little Pieces showtimes in London
via