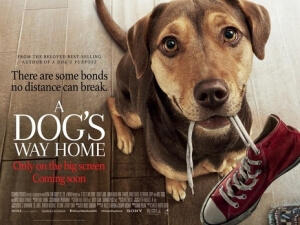 BASICALLY…: A dog (Howard) embarks on a 400-mile journey home after she is separated from her owner…

If ever there was a Nicholas Sparks equivalent for dogs, then it’s undoubtedly American author W. Bruce Cameron, whose 2010 book A Dog’s Purpose – which was later adapted into a film in 2017 – spent nineteen weeks on the New York Times bestseller list, which no doubt inspired him to branch his work out into other canine-related stories. Among such books to his credit, from children’s stories to standalones, is the 2017 novel A Dog’s Way Home, which takes the gimmick he is best known for – telling a story from the dog’s point of view – and applies a Homeward Bound formula to make it a lot more adventurous than some of his other work.

This novel is, of course, the basis for this new film of the same name, and it’s imperative that I mentioned Nicholas Sparks earlier because this movie really does feel like one of his schmaltzy, corny and sometimes unintentionally funny stories but from the perspective of a very annoying and very dumb little dog.

Said little dog is Bella (voiced via narration by Bryce Dallas Howard), who is raised by a cat underneath a construction site and is found by a young man named Lucas (Jonah Hauer-King) who adopts him. She lives a happy life with Lucas and his mother Terri (Ashley Judd) in Denver, Colorado, but when Bella is deemed a Pitbull – a species of dog that is illegal in the city – Bella is moved 400 miles away to New Mexico where she can be safe. However, Bella misses Lucas so much that she decides to leave and make her own way back home, on a journey that sees her encounter several new owners and some ferocious wild animals out in the wilderness.

Judging completely by the fact that the screening I was in had people going “aww” and “she’s so cute” on either side of me, it’s pretty damn obvious who this movie was made for; anyone anywhere who owns or has owned a dog, and who probably has made it the centre of their entire universe, is the key demographic for this film, just as it was with A Dog’s Purpose, and they are most likely going to be the ones who fall the hardest for it. I do like dogs (though I always consider myself to be more of a cat person), but not enough to fawn over them like a newborn baby every single time I come across them; those are the people that this movie panders to the most, with the dog doing very cute things for most of its running time in scenes that are so clearly designed to get an “aww” out of them, no matter how sickly sweet the scene.

Admittedly, the dog is very cute, and the dog actor they got for the part was a very good one, but because the filmmakers didn’t have the balls (much like its protagonist) to make a mostly silent film that relied heavily on its visuals to tell the story, they gave this dog the most obnoxious and pandering voice by Bryce Dallas Howard, who reads all of her lines like she’s high off her face on the greatest combination of cocaine and ecstasy, all whilst reading the latest bedtime story on Cbeebies. Most of the time, her dialogue consists of things that we are currently seeing be played out in the scene, and very rarely does she have anything to say that’s more meaningful than just “oh, look, a squirrel!”, and I understand that the point is that she’s a dog and doesn’t understand things that humans do, but there are times when this dog is so dumb that it’s hard to imagine she’s capable of doing some of the stuff she does throughout the film, such as survive for so long out in the woods looking after an orphaned little cougar. Don’t worry, animal protectionists, for there was no actual cougar on the set with this dog; instead, they’ve opted for some of the worst visual effects to bring this cougar to life, and it’s such an ungodly looking effect that it wouldn’t even pass for a character in a sub-par animated movie, let alone a movie that largely uses real dogs for its scenes. The terrible effects on this cougar – they even animated its eyes to be as expressive as possible, and it’s so unnatural it’s almost scary – are some of the more unintentional laughs you’ll get from this movie, as well as another hilariously hokey transition effect as Bella goes from a puppy to a full-grown dog, which just looks like when Chuck Norris turned into a bear in Forest Warrior (as you do), which only add to the insane corniness that this movie possesses.

Outside of an obnoxious voice for this dog and its tendency to display some unintentional comedy, the movie is largely just in one ear and out the other. You know exactly how this story is going to play out – largely because the trailer practically shows the entire movie from beginning to end – and so it’s largely just dull, with one or two moments that are way too insane for its own good. One of Bella’s many owners during its journey is this homeless man played by Edward James Olmos, who one day decides to chain her to his body for no reason which later puts the dog in a rather morbid position that will probably upset some of the younger audience members; and earlier in the movie, there is a villainous land developer who has it out for this dog so much that he sends a dog catcher to stalk this family day and night just out of spite, and what makes this even crazier is that this land developer guy just disappears from the movie entirely after that point, not even coming back for the inevitable climax. But as entertaining as this all probably sounds to you, the movie really isn’t that exciting; it’s rather dull, and banking heavily on its audience being so distracted by the dog’s cuteness that they’ll overlook how syrupy and trite the rest of the movie is.

A Dog’s Way Home is a corny, sickly sweet and sometimes unintentionally funny dog-centric tale that banks heavily on the cuteness of its canine lead, despite a rather obnoxious and pandering voiceover by Bryce Dallas Howard.