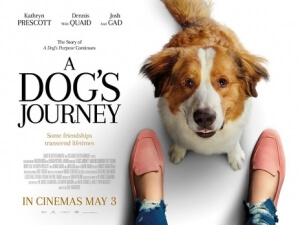 BASICALLY…: Bailey the dog (Gad) is reincarnated into several other dogs, and uses his new lives to protect young CJ (Prescott), the granddaughter of his previous owner Ethan (Quaid)…

You don’t have to be a dog lover to enjoy A Dog’s Journey, even if it’s almost entirely for the wrong reasons.

At first glance, making a sequel to the 2017 film A Dog’s Purpose, based on the bestselling novel by W. Bruce Cameron, isn’t so surprising; despite critics not exactly warming to it with a 34% Rotten Tomatoes rating, the film was a financial hit with a gross of just over $200 million worldwide against a $22 million budget, and that’s despite said feedback as well as controversial footage that emerged before its release, which showed questionable on-set treatment of one of the canine co-stars. But beyond all of that, the appeal of seeing a movie about an adorable dog is universal, and from a studio’s perspective it would be foolish to not capitalise on this undying love people have for their canine companions, even if it means we get movies that feel like Nicholas Sparks crossed with a Pedigree advert.

However, as someone who didn’t think much of the first film, I have to say that A Dog’s Journey really surprised me… but probably not in the way you might be thinking. The movie, like its predecessor, is corny, sappy, and unbelievably manipulative, but with a couple of key differences: 1) this movie just happens to be slightly better at it, and 2) there are some seriously bonkers twists and turns that it takes which help make it a much more enjoyable sit this time around, if only because you can’t believe they’ve Trojan-horsed such madness into a film about an adorable dog with the voice of Josh Gad.

He returns as the inner voice of Bailey, the dog who spent the previous movie being reincarnated into different breeds, until he was reunited with his original owner Ethan (Dennis Quaid) as a St. Bernard. Bailey now lives a happy life on Ethan’s farm, with his wife Hannah (Marg Helgenberger) and their infant granddaughter CJ, but shortly after CJ’s monstrously neglectful and self-centred mother Gloria (Betty Gilpin, who is having an absolute blast playing the kind of irredeemably wicked character that’s straight out of a fairy tale) takes her away, Bailey succumbs to old age. However, he is reincarnated once more as a female beagle named Molly, with a new purpose to find and protect CJ at all costs; and so (s)he does, as the now 11-year-old CJ (Abby Ryder Fortson) takes the puppy in whilst her mother continues to be cartoonishly neglectful and vile, which begins a lifelong mission for the dog that takes him across several lives, different breeds, and more than a few fateful encounters, all while keeping an eye on CJ as she grows into a young woman (Kathryn Prescott).

Right off the bat, I will say that this movie is a noticeable improvement on the first film; while it is objectively rather saccharine and clearly manufactured to appease the biggest dog enthusiasts out there, this movie just happens to do certain elements with a bit more care and understanding, and by keeping the focus solely on this one relationship between girl and dog(s) – whereas the first film shifted focus from one owner to the next, before coming full circle at the end – it feels like it has a bit more, well, purpose to itself. You can say whatever you want about all the contrivances and hackneyed dialogue that’s all over this film, but it feels like there’s a bit more heart to it, and that’s partly due to the fact that said central relationship between CJ and the multiple incarnations of dogs is admittedly rather sweet, with their interactions when she is an infant, a young girl, and later a young adult sometimes working against all odds to melt the heart of even the biggest cynic in the audience. Sure, that’s probably the manipulative tendencies of this script working overtime to get emotions out of its audience, but this film at least does so more naturally than A Dog’s Purpose or even A Dog’s Way Home from earlier this year.

However, there are still certain things about it that are truly baffling, from its wildly inconsistent tone – heavy dramatic dialogue scenes where tears are being shed are suddenly interrupted by Josh Gad’s narration declaring that he wants the bed he’s lying on to be made of bacon – to the hilariously dark moments of drama throughout it. This movie packs in things you would never expect to see in a family-oriented dog movie like this, such as emotional abuse, alcoholism, obsessive boyfriends, and even cancer sub-plots, all of which just come out of nowhere to suddenly dial the drama up to 11, and it’s so bizarre when they do come into play that you’re utterly fascinated by how abruptly they come into to interrupt this otherwise cute story about a reincarnated dog. Those moments are what truly made the film for me, as I honestly couldn’t believe they were actually doing these things so much that I had little choice but to respect the hell out of it for attempting such wildly out-of-nowhere serious issues, even when it comes in a film that has a scene where a character steps into dog poop left by a vengeful dog.

With how wildly insane some of these choices are, not to mention how tonally out of place and sometimes awkward the humour is – which makes sense when you know that Gail Mancuso, taking over from Lasse Hallström (yes, A Dog’s Purpose was directed by someone named Lasse) in her feature directorial debut, previously directed episodes of sitcoms like Modern Family, 30 Rock, Two and a Half Men, Gilmore Girls and Friends – you’d think that this film would be a miserable sit. However, it ended up being a much more entertaining ride than expected, though not entirely for the right reasons.

A Dog’s Journey is a noticeable improvement over its predecessor, at least in heart and soul, but its real joy comes from the utterly bizarre turns that it makes and the tonal shifts that are so over-the-top and nonsensical that it’s an oddly entertaining sit as a result.

Check out A Dog’s Journey showtimes in London
on Walloh.